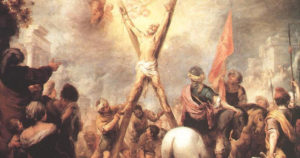 ST. ANDREW was one of the fishermen of Bethsaida, and brother, perhaps elder brother, of St. Peter, and became a disciple of St. John Baptist. He seemed always eager to bring others into notice; when called himself by Christ on the banks of the Jordan, his first thought was to go in search of his brother, and he said, “We have found the Messias,” and he brought him to Jesus. It was he again who, when Christ wished to feed the five thousand in the desert, pointed out the little lad with the five loaves and fishes. St. Andrew went forth upon his mission to plant the Faith in Scythia and Greece, and at the end of years of toil to win a martyr’s crown. After suffering a cruel scourging at Patræ in Achaia, he was left, bound by cords, to die upon a cross. When St. Andrew first caught sight of the gibbet on which he was to die, he greeted the precious wood with joy. “O good cross! ” he cried, “made beautiful by the limbs of Christ, so long desired, now so happily found! Receive me into thy arms and present me to my Master, that He Who redeemed me through thee may now accept me from thee.” Two whole days the martyr remained hanging on this cross alive, preaching, with outstretched arms from this chair of truth, to all who came near, and entreating them not to hinder his passion.

Reflection.—If we would do good to others, we must, like St. Andrew, keep close to the cross.

We humbly pray Your majesty, O Lord, that, as blessed Andrew was a preacher and ruler in Your Church, so he may always intercede for us with You.
Through Jesus Christ, thy Son our Lord, Who liveth and reigneth with thee, in the unity of the Holy Ghost, ever one God, world without end.
R. Amen. 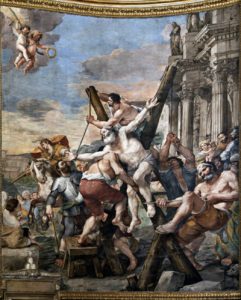 At that time, as Jesus was walking by the sea of Galilee, He saw two brothers, Simon, who is called Peter, and his brother Andrew, casting a net into the sea – for they were fishermen -. And He said to them, Come, follow Me, and I will make you fishers of men. And at once they left the nets, and followed Him. And going farther on, He saw two other brothers, James the son of Zebedee, and his brother John, in a boat with Zebedee their father, mending their nets; and He called them. And immediately they left their nets and their father, and followed him