The Lord says: “I think thoughts of peace, and not of affliction. You shall call upon Me, and I will hear you; and I will bring back your captivity from all places.” 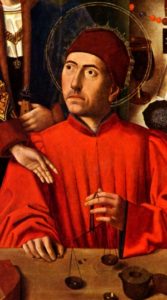 ELIGIUS, a goldsmith at Paris, was commissioned by King Clotaire to make a throne. With the gold and precious stones given him he made two. Struck by his rare honesty, the king gave him an appointment at court, and demanded an oath of fidelity sworn upon holy relics; but Eligius prayed with tears to be excused, for fear of failing in reverence to the relics of the Saints. On entering the court he fortified himself against its seductions by many austerities and continual ejaculatory prayers. He had a marvellous zeal for the redemption of captives, and for their deliverance would sell his jewels, his food, his clothes, and his very shoes, once by his prayers breaking their chains and opening their prisons. His great delight was in making rich shrines for relics. His striking virtue caused him, a layman and a goldsmith, to be made Bishop of Noyon, and his sanctity in this holy office was remarkable. He possessed the gifts of miracles and prophecy, and died in 665.

Reflection.—When God called His Saints to Himself, He might, had He so pleased, have taken their bodies also; but He willed to leave them in our charge, for our help and consolation. Be careful to imitate St. Eligius in making a good use of so great a treasure.

O Lord, we beseech You, arouse the wills of Your faithful people that, by a more earnest search for the fruit of Your divine work, they may receive more abundantly of the healing effects of Your goodness.
Through Jesus Christ, thy Son our Lord, Who liveth and reigneth with thee, in the unity of the Holy Ghost, ever one God, world without end.
R. Amen.