Sinners wait to destroy me, but I pay heed to Your decrees, O Lord. I see that all fulfillment has its limits; broad indeed is Your command.
Ps 118:1
Happy are they whose way is blameless, who walk in the law of the Lord.
V. Glory be to the Father, and to the Son, and to the Holy Ghost.
R. As it was in the beginning, is now, and ever shall be, world without end. Amen. 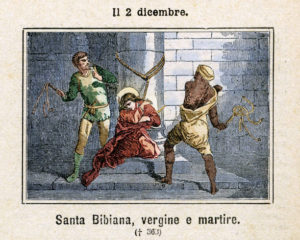 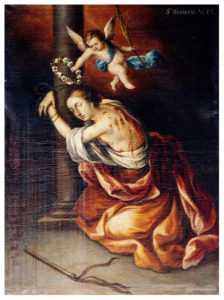 ST. BIBIANA was a native of Rome. Flavian, her father, was apprehended, burned in the face with a hot iron, and banished to Aequapendente, where he died of his wounds a few days after; and her mother, Dafrosa, was some time after beheaded. Bibiana and her sister Demetria, after the death of their parents, were stripped of all they had in the world and suffered much from poverty. Apronianus, Governor of Rome, summoned them to appear before him. Demetria, having made confession of her faith, fell down and expired at the foot of the tribunal, in the presence of the judge. Apronianus gave orders that

Bibiana should be put into the hands of a wicked woman named Rufina, who was to bring her to another way of thinking; but Bibiana, making prayer her shield, remained invincible. Apronianus, enraged at the courage and perseverance of a tender virgin, ordered her to be tied to a pillar and whipped with scourges loaded with leaden plummets till she expired. The Saint underwent this punishment cheerfully, and died in the hands of the executioners.

Reflection.–Pray for a fidelity and patience like Bibiana’s under all trials, that neither convenience nor any worldly advantage may ever prevail upon you to transgress your duty.

O God, giver of all good gifts, You Who in Your servant, Bibiana, joined the flower of virginity with the palm of martyrdom, by her intercession unite our hearts to You in charity so that, saved from all dangers we may obtain the rewards of eternal life.

Graciously accept the sacrificial gifts offered You, O Lord, through the merits of blessed Bibiana, Your Virgin and Martyr, and grant they may prove an unfailing aid for us.

We who have been refreshed by the richness of Your divine sacrament beseech You, O Lord our God, that through the intercession of blessed Bibiana, Your Virgin and Martyr, we may forevermore abide in its participation.