Ad te levávi ánimam meam: Deus meus, in te confíde, non erubéscam: neque irrídeant me inimíci mei: étenim univérsi, qui te exspéctant, non confundéntur.
To You I lift up my soul: in You, O my God, I trust; let me not be put to shame; let not my enemies exult over me. No one who waits for You shall be put to shame. 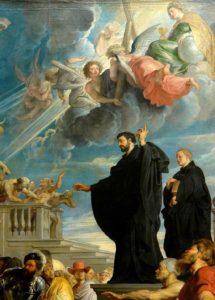 YOUNG Spanish gentleman, in the dangerous days of the Reformation, was making a name for himself as a Professor of Philosophy in the University of Paris, and had seemingly no higher aim, when St. Ignatius of Loyola won him to heavenly thoughts. After a brief apostolate amongst his countrymen in Rome he was sent by St. Ignatius to the Indies, where for twelve years he was to wear himself out, bearing the Gospel to Hindostan, to Malacca, and to Japan. Thwarted by the jealousy, covetousness, and carelessness of those who should have helped and encouraged him, neither their opposition nor the difficulties of every sort which he encountered could make him slacken his labors for souls. The vast kingdom of China appealed to his charity, and he was resolved to risk his life to force an entry, when God took him to Himself, and on the 2d of December, 1552, he died, like Moses, in sight of the land of promise.

Reflection.—Some are specially called to work for souls; but there is no one who cannot help much in their salvation. Holy example, earnest intercession, the offerings of our actions in their behalf—all this needs only the spirit which animated St. Francis Xavier, the desire to make some return to God.

Put forth Your power, O Lord, we beseech You, and come, that with You as our protector we may be rescued from the impending danger of our sins; and with You as our deliverer, may we obtain our salvation.