The following in from the book “Why do Catholics Eat Fish on Fridays?”

Though Christmas is obviously still regarded as a Christian holiday, it should also be remembered that it is a deeply Catholic feast.  To this day the anniversary of Our Lord’s birth is named after the Catholic Masses offered during it, Christmas being a contraction of “Christ’s Mass”.  Christmas, however, not only has a Catholic name, but in some parts of these united States it was regarded as a predominantly Catholic holiday.  In New England, Puritans virtually outlawed the ceclebration of this ‘papist’ feast, requiring employees to work and students to attend school on December 25, all under penalty of dismissal or expulsion.  Factory owners would even open their plants earlier than usual on Christmas Day to make sure that Catholics could not attend a morning Mass. 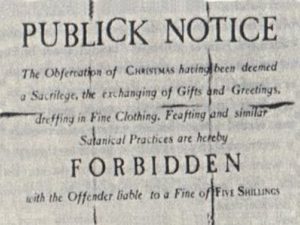 Christmas symbols these days are also apt to ose their religious significance. Christmas trees, for example, are either treated as secular adornments for office buildings or equated with the pagan yule customs of pre Christian Germany.  Both assessments are incorrect.  The Christmas tree has an entirely medieval Catholic origin, being a combination of two phenomena: a pyramid of candles representing Christ’s ancestors called a Weinachtspyramide in German and the so called Paradise Tree.  In the Eastern churches, December 24 is the Feast of Adam and Eve, and though this holiday is not in the Latin calendar, Church officials nevertheless allowed Roman Catholics to observe it.  In the Middle Ages mystery plays that were staged on this day included a Paradise tree, a tree representing both the Tree of the Knowledge of Good and Evil as well as the Tree of Life from the Garden of Eden (Gen 2:9).  To symbolize both of these Edenic arbors, the Paradise tree was decorated with apples to represent the forbidden fruit and sweets to reprent the Tree of Life.  When the mystery plays were suppressed in the 15th century, the faithful moved the Paradise trees from the stage to their homes.  The apples were later substituted for other round objects (such as shinny red balls) while a Star of Bethlehem and lights from the Weinachtsyramide were added, but the symbolism remained essentially the same.  Thus, our modern Christmas tree is actually the medieval Paradise tree, a reminder of the reason why God became man in the first place and a fortaste of the sweet Tree from which Our Lord’s birth would once again enable us to taste.

Two other seemingly secular customs bear mention: Christmas lights and decking the halls with boughs of holly. The custom of putting lights in the window was begun by Catholics in Ireland during the times of the persecution, when Mass was outlawed by the British and had to be held in secret.  Faithful Irish believers would place a candle in the window on Christmas Eve as a sign to any priest who happened by that this home was a safe haven in which Mass could be offered.  When interrogated by the Brittish about the meaning of this practice, the Irish replied that the lights were an invitation for Joseph and Mary to stay the night.  Unthreatened by this supposed superstition, the Brittish left them alone.

Christmas holly harkens back to a number of beautiful stories about this popular holiday plant.  According to one tradition, holly’s prickly edges and red berries point backward to the thorny bush glowing red with fire that Moses saw on Mt Sinai as well as forward to the bloody crown of thorns that the newborn King would one day wear.  The use of holly as an emblem of the burning bush is particularly appropriate. On the testimony of the traditional Advent liturgy, it is not just God but God the Son who appeared to Moses in the bush, the same God who would become a helpless babe in a manger.  Similarly, the bush itself was seen as a type of the Blessed Virgin Mary, whose virginity was preserved despite childbirth just as the bush was perserved despite the fire engulfing it.

From Brian Kelly’s piece at Catholicism.org http://catholicism.org/lets-change-the-name-of-the-poinsetta-flower-to-dolorosa-flower.html we have this:

Finally, did You Know that the red leaf Poinsettia flower that adorns our altars at Christmas time was named after an anti-Catholic Freemason, Joel Roberts Poinsett. When Latin American countries complain of the United States (add British and French) businesses monopolizing much of their natural reserves (from silver [Sterling Co., etc.] and rubber (Firestone) to bananas, guavas and other exotic fruits [United Fruit Co.]), poinsettias don’t readily come to mind. But, Poinsett actually did take out a patent for the plant after he returned with it in 1825 from Mexico to his home in Charleston, South Carolina. He had swiped the flower from a Nativity Scene in the Franciscan church of Santa Prisca in Taxco, Guerrero. The patent was later sold to the Paul Ecker Ranch of Encinitas, California. They still own that patent today. 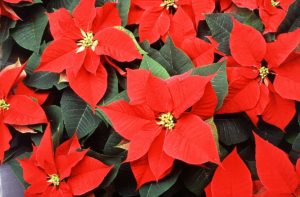 It was William Prescott, a historian and horticulturist, who named the plant the poinsettia in honor of Joel Poinsett’s “discovery.” On account of the fact that Prescott had just published a book called the Conquest of Mexico, in which he detailed Poinsett’s fascination with the plant, he had been asked by the Horticultural Society to give the popular plant Euphorbia pulcherrima a new name.

Joel Roberts Poinsett was born in Charleston in 1779. He studied law, military science, botany, and medicine and toured Europe and Asia for five years. He was fluent in French, Italian, Spanish, German, and Russian. He returned to the U.S. in 1808 amid rumors of an impending war with Great Britain, which began three years later. From 1810-1814 he served as a special (secret) agent to Latin American countries. All of his work south of the border was to promote U.S. financial interests and undermine Spain’s authority. His funding of the republican revolution in Argentina did not stop the rebels from being defeated there, and getting himself run out of the country; however, he and his American money did have more success in Chile, whose revolution in 1821 won them independence from Spain, and a fourth of July holiday. For a time Poinsett even served in the army of the anti-royalist forces there under General Jose Maria Carrera, earning for himself the rank of general on account of his military prowess. Long before the CIA there was Joel Poinsett.

The worst of the damage this scheming imperialistic Freemason did was in Mexico. After serving several terms as a South Carolinan congressman he entered the diplomatic service and was assigned as special envoy (spy) to Mexico from 1822-1823. While he was there he worked with his fellow Masonic brothers of the Scottish York Rite against General Iturbide who had declared himself Emperor Agustin I. Masonry had been introduced into Mexico in the 1780s. Most of the members of the congress in Mexico City were Freemasons as were the writers for the city’s most influential newspaper, El Sol. Before Poinsett left for the U.S. General Santa Ana’s forces had conquered the capital and Iturbide was allowed to go to France into exile.

In 1825, President John Quincy Adams appointed him Minster to Mexico, the term “minister” being used prior to that of “ambassador.” His main objective was to cut a deal with the republicans. If they would accept American support against royalists and despots by way of munitions, trade privileges, and money, they must cede Texas to the United States in return. Poinsett was already involved with government plans to make war on the southern Indian tribes and force them and the Cherokee in Texas to move westward. And, even though he was a Unionist, slavery was no issue with him; he was all for it. In fact his family owned many slaves and its fortune depended on the institution. More slave states were needed and Texas, he hoped, would be a big one. As it was, there was no slavery in all of Mexico, the last significant trafficker in the inhuman business left port in 1739. Father Hidalgo, heretic, insurrectionist, and rebel against the Catholic Church, outlawed it for good in 1810. Such is Mexico. Wayward priests ( and Hidalgo was off the wall, morally and doctrinally) sometimes get somethings right.

With the help of the Yorkistas in Congress, and the fear of liberal insurrections in many states, the last of the great insurgent leaders, Vincente Guerrero, was appointed president in 1828. Poinsett was practically a member of his cabinet. The Church had exposed Guerrero as an anti-Catholic Mason, but, sad to say, the brotherhood could count members even among the Catholic conservatives. Poinsett became overconfident. He next tried to coerce Guerrero, who had accepted so much of his bribery money, to send all full-blooded Spaniards back to Spain. They were the bulk of the opposition; they ran the banks, owned much of the land, and owned the mines. But they also had indispensable skills: they were teachers, doctors, and engineers, most of them middle class. Too, most of them were married to Mexicans. This displacement would have destroyed the country. It would have led to a horrible civil war. Guerrero was beginning to see the ugliness of the opportunistic gringo he was dealing with.

Finally, the free-thinking Yorkista lost all sense of balance. On his own authority he made an offer to his “friend” to buy Texas outright. Guerrero had had enough. He was still a patriot. Hoping to get rid of the obnoxious minister he leaked his letters to the press (some of them contained veiled threats of U.S. military action). Overnight, Poinsett became persona non grata. He was immediately recalled to Washington.

After serving another term in Congress, President Martin Van Buren made him his Secretary of War. He served from 1837-1841, presiding over the expulsion of thousands of southern Indians west of the Mississippi. He rallied the troops during the second Seminole War (1845-1842).

Mexico’s most notorious persona non grata, enemy of Spain and the Catholic Church, died at the home of his doctor in 1851 at the age of seventy-two.

There’s website for Sumter, South Carolina. It must have been a Mason who posted a page on Poinsett. He ends his very brief sketch with a short log about his Masonic connections and activities:

Brother Poinsett is recorded as having been Past Master of Recovery Lodge No. 31, Greenville, and Solomon’s Lodge No. 1, Charleston, South Carolina. In 1821, Brother Poinsett was elected Deputy Grand Master of the Grand Lodge of South Carolina, but was never able to serve as Grand Master, because of his appointment as Secretary of War (1837-1841) under President Van Buren. He did serve as Grand High Priest in South Carolina (1821-1841). At the request of Mexican Freemasons, he sent for charters for five lodges, which were granted by the Grand Lodge of New York. Subsequently, he helped establish the Grand Lodge of Mexico, and is credited with introducing Royal Arch Masonry to Mexico.