The holy Priest Valentine lived at the time of the Emperor Claudius. He was held in high estimation, both by the Christians and heathens, on account of his natural amiability, wisdom and virtue. Claudius himself desired to see him, and on his being brought into his presence, said to him: “Why do you refuse to be my friend, when I wish to become yours? Nothing in you displeases me, but that you confess a faith which is against our gods.” Valentine replied: “O Emperor! if you knew the God I worship, you would consider yourself blessed to serve Him. He it is who has given you your life and your crown, and who alone can make you eternally happy.” One of those present interrupted him, saying: “What think you, then, of Jupiter,–of Mercury?” “I think that they have been wicked men, as their lives show,” answered the Priest;” and, therefore, they are unworthy to be called gods.” “That is sacrilege!” cried many: “Valentine deserves to die!” Valentine begged the Emperor graciously to lend him his ear, only for a short space of time, that he might defend his words.

Having received permission to speak, he placed the falsity, of the heathen gods and the truth of the God of the Christians so clearly before their eyes, that the Emperor, prepossessed in his favor, said to those surrounding him: “I must confess this man speaketh with much reason, and nothing can be said to confute his teaching.” Calphurnius, the Governor, who was also present, on hearing the Emperor speak thus, was filled with fear that he would embrace the Christian faith, and cried: “Valentine is a sorcerer, a blasphemer of the gods of the Empire! He must die, or an insurrection will break out among the people!” This speech alarmed the Emperor to such a degree that he gave up the holy Priest entirely into the hands of the Governor. 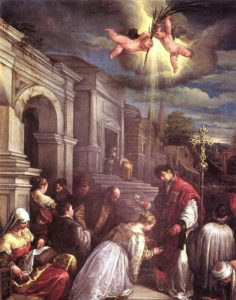 Calphurnius immediately cast him into a dungeon, and gave orders to Judge Asterius to accuse him as an enemy of the gods, according to law. Asterius wished first to make an attempt to win over the Priest, who was so universally loved, from the Christian faith, but to the good fortune of the judge, the contrary took place. Valentine restored the sight of the daughter of Asterius, who had been blind for many years, and, in consequence, the judge and his whole family forsook their idolatry and were baptized. When this was reported to the Emperor, he admired the power of the God whom Valentine adored, and endeavored to set the Saint free, but again frightened by Calphurnius with an insurrection, he at length gave orders to behead him. Saint Valentine received his death sentence with great joy, and ended his life by a glorious martyrdom. 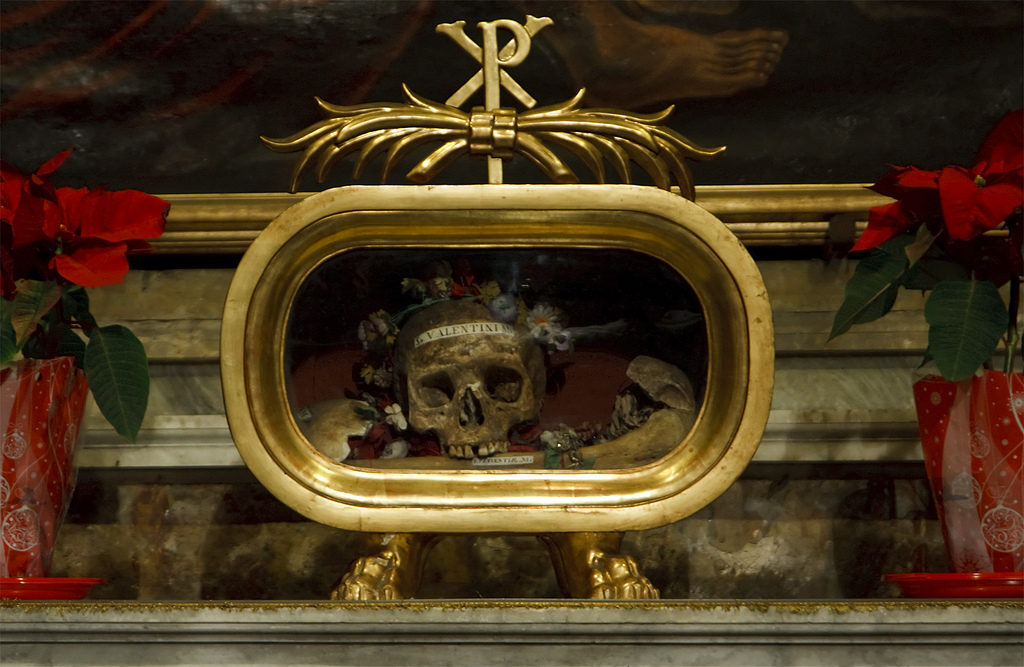 The holy Priest Valentine desires to convert the heathen Emperor, and endeavors to convince him of the falsity of his idols and the truth of the Christian God. How is it with you? Have you a true knowledge of the God in whom you believe? Do you strive to obtain it? To prefer, and more frequently to go to the theatre than to listen to a sermon; to prefer, and more frequently to read, a silly, or perhaps a sinful book, than a book of devotion; to prefer, and more frequently to speak of worldly affairs, of voluptuousness, of games, of luxurious garments, of your neighbors’ faults, or even of obscenities, than of God and holy subjects; these are not the means by which men are led to the most necessary knowledge of God. By listening to the Word of God, by reading books of devotion, by pious conversation, and by divine contemplation, we come to the knowledge of God. Do you make use of these means, or do you, perhaps, think that it is not so necessary to attain a knowledge of God? What! You surely are aware that Christ said: “Now this is eternal life,” that is the condition, the foundation, the first means to the eternal life: “that they may know Thee, the only true God, and Jesus Christ, whom Thou hast sent” (St. John,, ch. xvii.).

Where there is no knowledge of God, there is no true faith in Him, no true hope, no true love, no fear of God, no hope of salvation. St. Jerome said rightly: “The man who acknowledges not God, should rather be called an unreasonable animal than a man.” Where the knowledge of God is wanting, there the greatest crimes find an easy entrance and prevail; according to the words of the Prophet, “There is no knowledge of God in the land. Cursing, and lying, and killing, and theft, and adultery have overflowed” (Osee, chapter iv.). What can follow such crimes but eternal ruin? Consequently, strive zealously, through the means above mentioned, to attain a true knowledge of God. The better your comprehension of God, the more immovable will be your faith, the firmer your hope, the more ardent your love for Him, the more fervent your zeal to serve Him, the more carefully will you shun sin and endeavor to perform good actions. And this, believe me, is the only path that leads to salvation.

Today we keep our annual celebration of the triumph of the blessed Martyr Valentine, and the Church, while rejoicing in his glory, places him before us, that we may follow in his footsteps. If we suffer with him, we shall be glorified with him. There are two things to be considered in this glorious combat: namely, the hard-hearted cruelty of the torturer, and the unconquered patience of the Martyr–the cruelty of the torturer, that we may detest it; the patience of the Martyr, that we may imitate it. Hear what the Psalmist says in reproof of wickedness: Be not emulous of evildoers, for they shall shortly wither away as grass. But the Apostle teaches patience with the wicked in the words: Patience is necessary for you, that you may receive the promise. 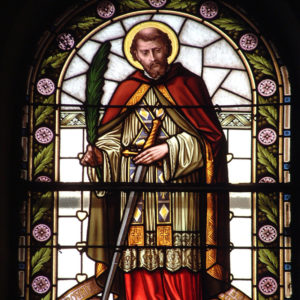 St. Valentine’s Day
(The Manual of the Holy Catholic Church, 1906)

Of St. Valentine few particulars are known. He was a holy priest of Rome, put to death about the year 270. One of the great Roman gates was built in his honor and called after him. It is now known as “del Popolo.”

But the name of St. Valentine has come down to us associated with the remnant of a pagan custom, that of choosing for a year some person to whom honor should be paid. The casting of lots was held on the 15th of February, and with it began the Roman festival of Lupercalia, in honor of the god Pan and the goddess Juno. To put down so dangerous a feast-making, the Church, according to Alban Butler, instituted the custom of drawing saints to be venerated for a year on the feast of St. Valentine, the day preceding that of the pagan lot-drawing, thus substituting heavenly for earthly love.

This old, old custom of choosing some one to love, to be looked up to, sets one thinking. So widespread a custom, lasting, too, for so long a time through the pagan era through the Middle Ages, even to our own day, seems to point to some natural cause. And it does. We are social beings in the natural and supernatural order, conscious of weakness and insufficiency when standing alone. In the garden of Paradise the foundation of society was laid when Adam said, “a man shall leave father and mother and cleave to his wife,” showing that at no period of his life need he stand alone. The supernatural order is based upon the two great laws, ”Thou shalt love the Lord thy God with thy whole heart, and thou shalt love thy neighbour as thyself.”

And there is such a stretching out of hands towards our fellow-creatures, such an expansion of heart at the sight of suffering or sorrow or need, that we have to be on our guard, lest it work in us merely from a natural goodness without the sacred stamp of grace.

This custom then of drawing saints to be our patrons for the year is a happy thought, bearing upon the inward yearning towards others; it is an expression of the loneliness of the human heart, its want of sympathy; it is also the bond between Heaven and earth. We are not made like the beasts with our eyes level with the ground, tending downwards. We have a right to invade the unseen world, to choose helpers there, to count upon assistance and comfort and cheering, where there is so much consolation, help, and joy.

A certain number of patrons were chosen for us by our parents without our having a say in the matter. Others we ourselves chose at confirmation, but without any very distinct idea of what we were doing, perhaps. But our patron on Valentine’s day can be one of mature deliberation, based upon a natural attraction and admiration, one whose example in the battle-field of life will be a help to us in our hour of trial. The more communion we can have with Heaven the better for us. The more our interests lie above, the less will the chains of earth rivet us to things below. And the chains of earth do bind. They bind in childhood and in youth; in middle manhood and old age. So the spirit that soars upward is the brave spirit, the safest, the happiest, and the strongest. There have been those who, in extreme old age, could show a long list of patrons whom they had honored for a year each with particular devotion, and when the allotted time was over added them to the long list of their predecessors, and invoked them still with the new Valentine of the New Year. What an array there would be of choice saints to meet such as these when they came to their Heavenly reward.

To some of us who do not love multiplicity our own namesake may be our perpetual Valentine–the patron given to us at our baptism, or chosen at our confirmation, or at any other solemn occasion. Let these then become realities to us, living friends and helpers, substantial guardians. The Heavenly patron will never be wanting to his earthy client–of that we may be sure. Let us not be wanting to him. St. Valentine, pray for us! 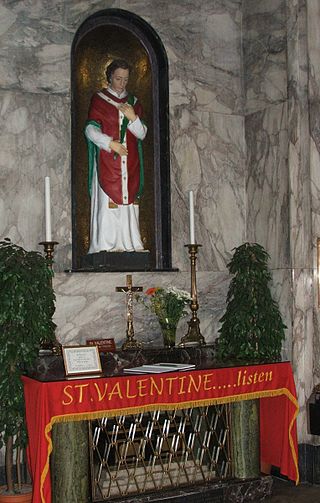