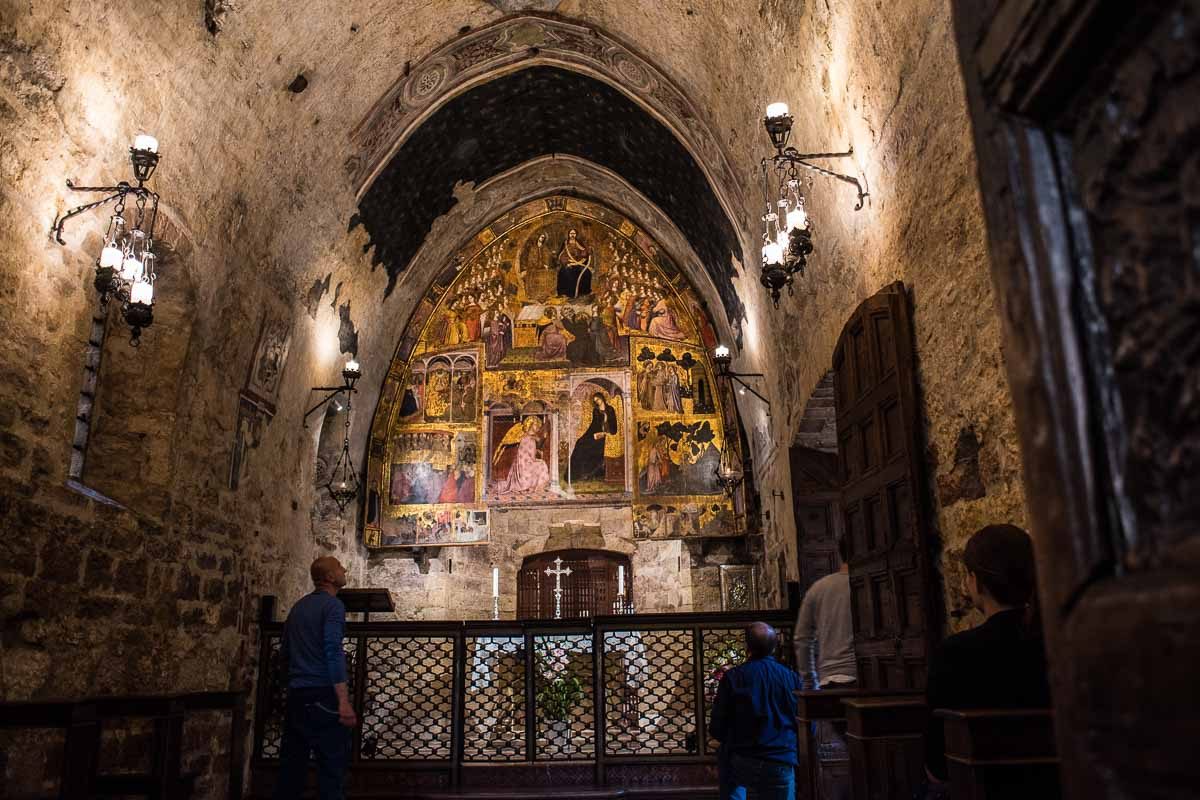 What is Portiuncula? The following is an excerpt from Major Life of St. Francis by St. Bonaventure

“The Portiuncula was an old church dedicated to the Virgin Mother of God which was abandoned . Francis had great devotion to the Queen of the world and when he saw that the church was deserted, he began to live there constantly in order to repair it. He heard that the Angels often visited it, so that it was called Saint Mary of the Angels, and he decided to stay there permanently out of reverence for the angels and love for the Mother of Christ.

He loved this spot more than any other in the world. It was here he began his religious life in a very small way; it is here he came to a happy end. When he was dying, he commended this spot above all others to the friars, because it was most dear to the Blessed Virgin.

This was the place where Saint Francis founded his Order by divine inspiration and it was divine providence which led him to repair three churches before he founded the Order and began to preach the Gospel.

This meant that he progressed from material things to more spiritual achievements, from lesser to greater, in due order, and it gave a prophetic indication of what he would accomplish later.

As he was living there by the church of Our Lady, Francis prayed to her who had conceived the Word, full of grace and truth, begging her insistently and with tears to become his advocate. Then he was granted the true spirit of the Gospel by the intercession of the Mother of mercy and he brought it to fruition.

He embraced the Mother of Our Lord Jesus with indescribable love because, as he said, it was she who made the Lord of majesty our brother, and through her we found mercy. After Christ, he put all his trust in her and took her as his patroness for himself and his friars.”
Today the chapel of Portiuncula is situated inside the Basilica of Saint Mary of the Angels roughly 5 km from Assisi, Italy.

The Indulgence:
“The Portiuncula indulgence is the first plenary indulgence that was ever granted in the Church. There were indeed indulgences at all times, but they were only partial, and only a partial remission of the temporal punishments could be obtained by them. But, as already remarked, he who gains the Portiuncula indulgence is freed from all temporal punishments and becomes as pure as after holy baptism. This was also the reason why Pope Honorius was astonished when St. Francis petitioned for the confirmation of this indulgence, for such an indulgence, up to that time, had been entirely unknown. It was only after he had come to the conviction that Jesus Christ himself wished it, that he granted the petition of the saint and confirmed the indulgence” (Source)

August 2nd is the feast of Portiuncula. A plenary indulgence is available to anyone who will
1. Receive sacramental confession (8 days before of after)
2. Receive the Holy Eucharist at Holy Mass on August 2nd
3. Enter a parish church and, with a contrite heart, pray the Our Father, Apostles Creed, and a pray of his/her own choosing for the intentions of the Pope.