Patron Saints of Plagues & Sacramentals to Protect Yourself From a Plague

Who are some patron saints of plagues? Here are a few who you could pray to for help during the outbreak.

he is one of the ‘Fourteen Holy Helpers’ – a group of saints people turned to for assistance during times of need. St George is also the patron of other things including soldiers, armourers, farmers and even sufferers of the plague and syphilis.(1)

The 1675–76 Malta plague epidemic was a major outbreak of plague (Maltese: pesta) on the island of Malta, then ruled by the Order of St John. It occurred between December 1675 and August 1676 and it resulted in approximately 11,300 deaths, making it the deadliest epidemic in Maltese history. Most deaths were in the urban areas including the capital Valletta and the Three Cities, and these had a mortality rate of about 41%. In the rural settlements, the mortality rate was 6.9%.

There was a religious revival during the epidemic, resulting in the veneration of the Blessed Sacrament and relics. There was particular devotion to patron saints of the plague-infected such as Saint Roch and Saint Sebastian, and also to other saints including Our Lady, Saint Rosalia, Saint Nicholas and Saint Anne. The historian Bartholomeo dal Pozzo attributed the epidemic as divine retribution against the population for their sins.

(From the Catholic Encyclopedia) – Born at Montpellier towards 1295; died 1327. His father was governor of that city. At his birth St. Roch is said to have been found miraculously marked on the breast with a red cross. Deprived of his parents when about twenty years old, he distributed his fortune among the poor, handed over to his uncle the government of Montpellier, and in the disguise of a mendicant pilgrim, set out for Italy, but stopped at Aquapendente, which was stricken by the plague, and devoted himself to the plague-stricken, curing them with the sign of the cross. He next visited Cesena and other neighbouring cities and then Rome. Everywhere the terrible scourge disappeared before his miraculous power. He visited Mantua, Modena, Parma, and other cities with the same results. At Piacenza, he himself was stricken with the plague. He withdrew to a hut in the neighbouring forest, where his wants were supplied by a gentleman named Gothard, who by a miracle learned the place of his retreat. After his recovery Roch returned to France. Arriving at Montpellier and refusing to disclose his identity, he was taken for a spy in the disguise of a pilgrim, and cast into prison by order of the governor, — his own uncle, some writers say, — where five years later he died. The miraculous cross on his breast as well as a document found in his possession now served for his identification. He was accordingly given a public funeral, and numerous miracles attested his sanctity.

In 1414, during the Council of Constance, the plague having broken out in that city, the Fathers of the Council ordered public prayers and processions in honour of the saint, and immediately the plague ceased. His relics, according to Wadding, were carried furtively to Venice in 1485, where they are still venerated.(2)

O Blessed Saint Roch,
Patron of the sick,
Have pity on those
Who lie upon a bed of suffering.

Your power was so great
When you were in this world,
That by the sign of the Cross,
Many were healed of their diseases.
Now that you are in heaven,
Your power is not less.
Offer, then, to God
Our sighs and tears
And obtain for us that health we seek
Through Christ our Lord.

Saint Roch, pray for us,
That we may be preserved
From all diseases of body and soul.

Click here to get prayer cards of St. Roch (pack of 25… give some away … sermon below mentions this)

He converted to Christianity after seeing the bravery of Christian martyrs and eventually compelled close companions to convert, including a Roman prefect who was cured of a plague when he renounced his pagan idols. Because his intercession to God contributed to the cure of the Roman prefect, Sebastian became widely associated with the cure of plagues, especially in cities throughout the Italian Peninsula and cities and villages often adopted a “plague saint” to protect them from pestilence in addition to a patron saint. Florence, the birthplace of the Renaissance and cultural hub of Europe, relied on Saint Sebastian’s intercession after the city’s bishop constructed an altar in Sebastian’s honor as a last resort to stopping the Black Death. Shortly thereafter, the plague ceased, and the bishop built a church dedicated to Saint Sebastian in thanksgiving for his intercession. (3) 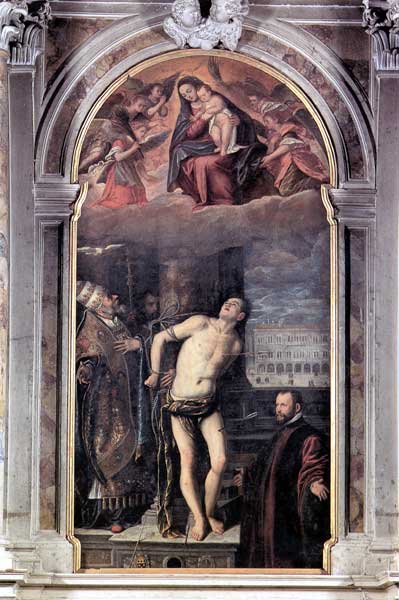 “Santuzza”, as St. Rosalia is affectionately called in Palermo, emerged as one of the best known and most venerated saints in Christianity, especially in Sicily; still today, anywhere in the world, the people from Palermo exchange the greeting “Viva Palermo e Santa Rosalia.”

Rosalia was born in 1128. She was a young girl descendant of a noble family, named Sinibaldi, who lived at the court of Roger II of Sicily. When Rosalia was 13-15 years old, the count Baldovino asked her in marriage in return for saving the king’s life, but she refused him and decided to follow the Basilian Order, living a religious life in a cave in the Quisquina forest, not far from Bivona, a village near Agrigento. Later Rosalia moved to Palermo, hiding in Monte Pellegrino, in a cave with abundant water, where she lived until her death.

In 1624 a plague beset Palermo. In the same year a sick woman went to Monte Pellegrino and drinked some water dripping from the rock inside the cave. Suddenly she saw an apparition of the Virgin Mary and Rosalia who told her that in the cave was hidden a treasure: under a sheet of marble they found human bones smelling of flowers.

One year later a hunter, named Vincenzo Bonello, went to Monte Pellegrino to kill himself after his wife died because of the plague. There, Saint Rosalia appeared to him, saying that the only way to save Palermo from the plague was to bring her bones through the town. A few months later in Palermo took place the procession on honour of Saint Rosalia, during which a miracle happened: when her bones were carried around the town, plague ceased, people suddenly recovered and the contamination stopped.(4)

Father in heaven, we thank You for the communion of saints so that we can draw near to You through the prayers of St. Rosalia. Through her prayers help us to remember that our destiny is heaven. As St. Rosalia gave up all things in this world for the sake of Your Kingdom, through her prayers may we love more fully Your Son our Lord Jesus Christ, who together with You and the Holy Spirit are one God forever and ever. Amen.

O God, our Father, mercifully look upon Your people who come to You and grant through the intercession of St. Rosalia, who turned away from earthly delights to the joys of contemplation, that we may be delivered from all harm here on earth and one day be welcomed into the Kingdom of Heaven.

St. Rosalia, confessor and virgin, we pray to God for our families and friends. Through your powerful prayers, may we obtain health, life, and eternal salvation. I also pray today for this special need and intention (make your intention known). O glorious virgin and confessor, St. Rosalia, I promise henceforth to remember and follow your example of faith and love. Pray for me and mine. Amen 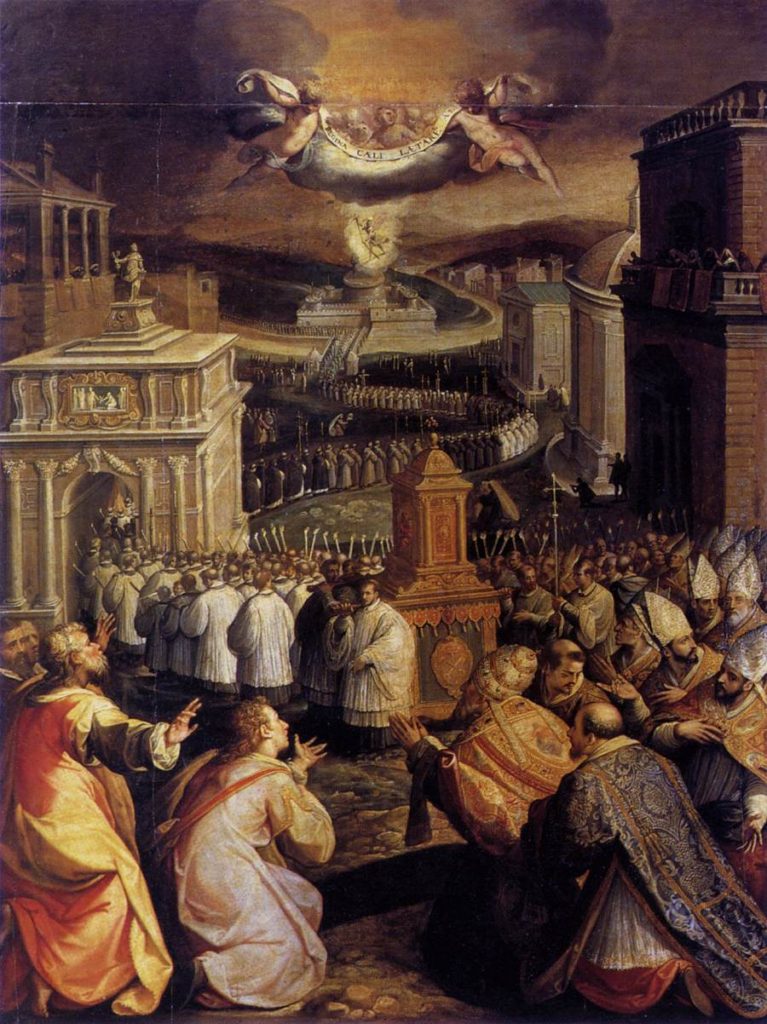 In 590 Gregory was elected pope, taking office unwillingly. He succeeded Pelagius II, who had succumbed to the plague that swept Rome that year. According to tradition, Gregory led a penitential procession to Santa Maria Maggiore during that plague; a vision of the archangel Michael atop Hadrian’s Tomb (now the Castel Sant’Angelo) convinced him that Rome would be spared. Today a statue on the Castel Sant’Angelo depicts Michael replacing his sword in its scabbard. The Seven Penitential Psalms associated with this procession date from the 12th century and have been incorrectly ascribed to Gregory.(5) 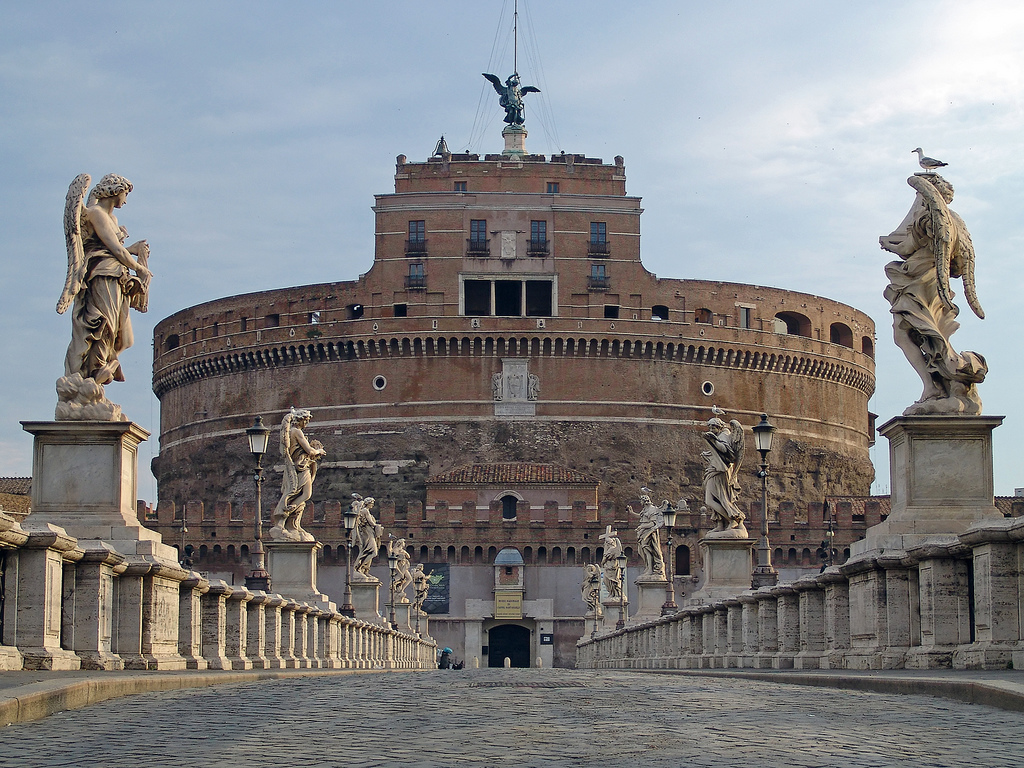 Greg DiPippo writes: I would recommend that we also ask, on behalf of our bishops, for the intervention of St Charles Borromeo, a model bishop in so many ways. When Milan was struck by a plague in 1576-77, the city was largely abandoned by the civil authorities, and St Charles was the first not only to aid the afflicted, but also to lead the Church in prayer for deliverance from the plague.(6) 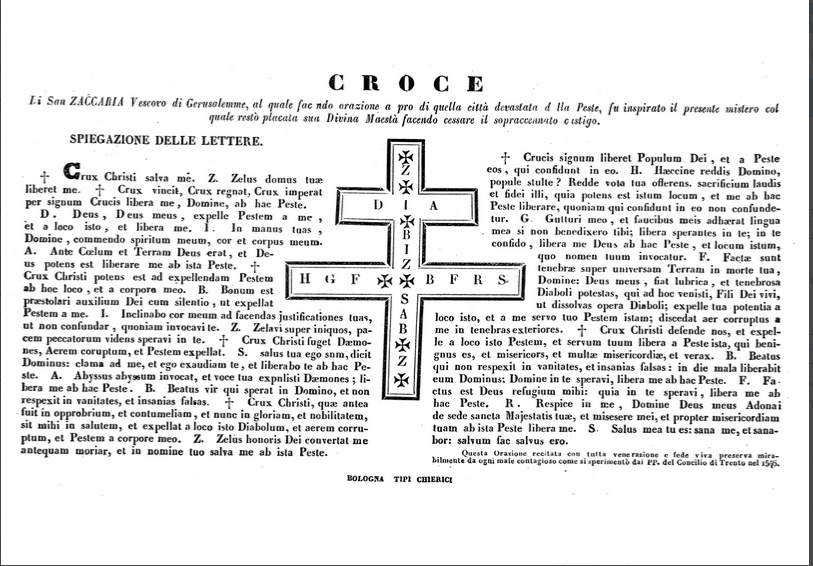 O Cross of Christ, save me. Z. May zeal for your house free me. + The Cross conquers; the Cross reigns; the Cross rules; by the sign of the Cross free me, O Lord, from this plague.

I. I will incline my heart to performing your just deeds, and I will not be confounded, for I have called upon you. Z. I had zeal on occasion of the wicked; seeing the peace of sinners, I have hoped in you.

A. Abyss calls to abyss, and you have expelled demons by your voice; liberate me from this plague. B. Blessed the man who hopes in the Lord, and does not look upon vanities, and false extravagances.

Z. May zeal for the honor of God convert me before I die, and in your name, save me from this plague. + May sign of the Cross free the People of God, and those who trust in him, from the plague.

H. Will this foolish people return to the Lord? Make good on your vows, offering a sacrifice of praise and faith to him, because he is able to liberate this place and me, from this plague; for whoever trusts in him will not be confounded.

G. If I will not praise you, let me tongue stick to my throat and to my jaws; free those who hope in you; in you I trust; liberate me and this place, O God, from this plague, for your name has been invoked in prayer.

F. At your death, O Lord, darkness fell over the whole earth; my God, render the power of the devil tenuous and dim, for it is for this that you have come, O Son of the living God: so that you might destroy the works of the devil with your power, drive out from this place and from me, your servant, this plague; and may the corrupt air depart from me into the outer darkness.

R. Look upon me, O Lord my God, Adonai, from the holy seat of your Majesty, and have mercy on me, and because of your mercy, free me from this plague. S. You are my Salvation: heal me, and I will be healed; save me, and I will be saved. 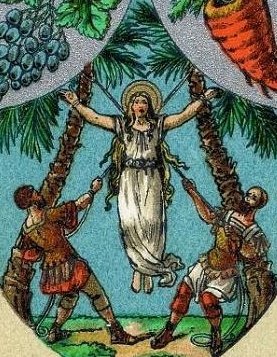 In Anzù, Northern Italy, the hotbed of the coronavirus in Europe, is a basilica where the relics of Saint Victor and Saint Corona are being preserved since the 9th century.

Saint Corona was only fifteen when she professed her Christian Faith during the persecution of the Roman emperor Marcus Aurelius around 165.

Corona was arrested and tied by her feet to the tops of two palm trees which were bent to the ground. When the palms were let loose she was torn apart. According to the Roman Martyrology, this happened in Syria.

Two investigations in 1943 and 1981, proved that the relics belong indeed to a man and a woman. Cedar pollen was found confirming an original burial in Syria and then in Cyprus.

Saint Corona is especially venerated in Austria and Bavaria as the patron-saint of treasure hunters and against epidemics. Her feast day is May 14. 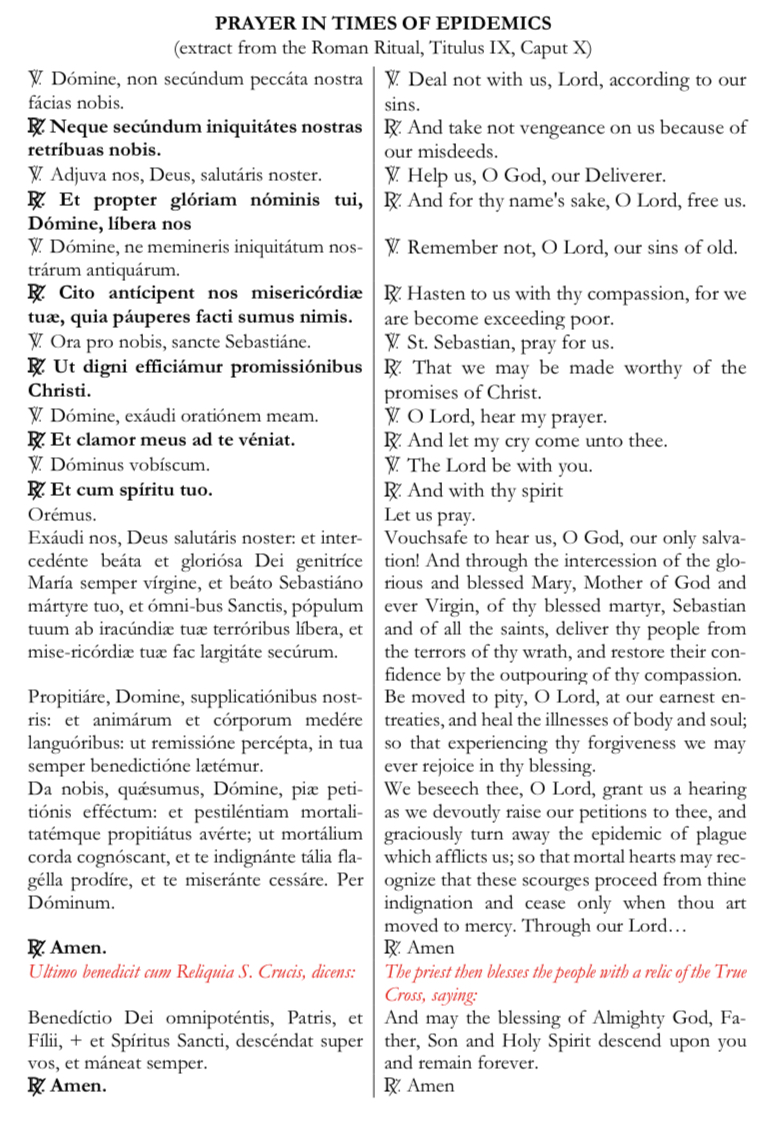