Can You Get Sick From Communion?

The short answer is yes.  Below will be a story of a priest who was poisoned from the wine during Mass. But first here is what St. Thomas Aquinas says about it. “If it be discovered that the wine has been poisoned, the priest should neither receive it nor administer it to others on any account, lest the life-giving chalice become one of death.” Summa Theologica IIIa Q83 a.6, ad3. (Thanks to OnePeterFive for sharing the tweet by Joseph Shaw)

How many would call St. Thomas a heretic for that?  During this time of anxiety over the COVID-19 (whether or not it is going to kill many or very few is not the topic of this) many dioceses are ending public Masses (priests should say Private Masses as you do not need a crowd in the nave for a priest to say Mass… sadly many priests are not taught that) so many faithful are upset.  Yes, prudence is needed but also fortitude so the priests should still be out there giving sacraments to the sick and dying especially, offering private Masses and leading processions.  Hopefully, they are not locking their doors and hiding in the rectory.

Here is a brief account of a priest being poisoned during Mass.

Two years after Garcia Moreno was murdered, Archbishop Ignacio Checa y Barba was killed for standing up to the Masonic and liberal government that had taken over. 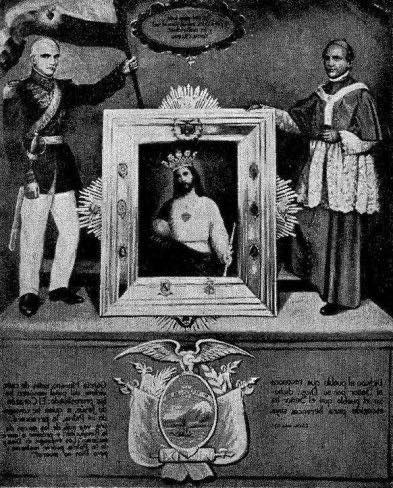 Here is an account by Marian T. Horvat, Ph.D. on the event:

On the morning of March 30, 1877, Archbishop José Ignacio Checa y Barba was celebrating the solemn liturgy of Good Friday. After drinking the wine from the Sacred Chalice, he ordered one of the Canons assisting at the service to take away the wine because it tasted bitter and should not be used the next day for Mass.

The ceremony concluded, he exited the Cathedral by a side door and walked the short distance to the Episcopal Palace to take his lunch. He was already sweating profusely, with nausea and an unsteady step. Upon entering the Palace, he fell to the floor in acute pain, overtaken by convulsions and stomach contractions.

“I’ve been poisoned!” he exclaimed, and called for a Priest to absolve him. He told the doctor who had been summoned, “I am poisoned. I took a very bitter wine from the Chalice and I feel a terrible fire burning my entrails.”

Then he called out, “My sons, help me! Help me! I am dying!” These were his last words. His face became livid, foam came from his lips, and a few minutes later he was dead. He was 47 years old and had been Archbishop of Quito for nine years.

In the autopsy, performed shortly after his death, a large amount of strychnine was found in his body. It had been surreptitiously placed in the holy vessel containing the wine. The scheme could not have been more insidious, carried out during the Good Friday liturgy commemorating the death of Our Lord Jesus Christ.

The message to the Clergy and people was clear: The enemies of the Church had eliminated the Prelate who had become an obstacle for instigating the anti-clerical program the liberal government wanted to install in Ecuador.

For more on this please visit the article here

Horvat writes about finding their remains.

On April 8, a day he still recalls with joy, Dr. Salazar, accompanied by the Mother Superior and sisters as witnesses, entered the Convent Church with a workman. His method was simple. Knocking on the columns with his hands, he found one in the lower choir with a hollow telltale ring about five feet up the column, signaling an interior opening. The workman opened it to reveal a cavity two feet deep and 15 inches high.

Inside was a light colored wood box, and on it were these handwritten words: February 21, 1913, the Heart of Archbishop of Quito His Excellency Ignatius Checa. In the box was a flask with the embalmed heart of the poisoned Archbishop and an official document signed by Archbishop Federico González Suárez describing the contents. The heart, drained of blood, has a whitish color and is marked by a black spot, a sign of the poison that killed the Archbishop.

You can venerate his heart today.  More on the finding of his remains is found here

During this time, pray more, pray better, read more, go to adoration & if you cannot get in then pray outside the doors.  Offer spiritual communions every hour.  When the new hour starts say an Ave and do a spiritual communion (St Francis de Sales did one every 15 minutes).  Read scripture.  Use the sacramentals.  Pray, hope, and do not worry.  These are the times that try men’s souls.  I am not fan of Thomas Paine.  He was a blasphemer and wasn’t a fan of Christianity but these words can be used for us today. Substitute “Church” for “country”

THESE are the times that try men’s souls. The summer soldier and the sunshine patriot will, in this crisis, shrink from the service of their country; but he that stands it now, deserves the love and thanks of man and woman. Tyranny, like hell, is not easily conquered; yet we have this consolation with us, that the harder the conflict, the more glorious the triumph.

4 thoughts on “Can You Get Sick From Communion?”