Devotion to The Maria Bambina

Devotion to The Maria Bambina 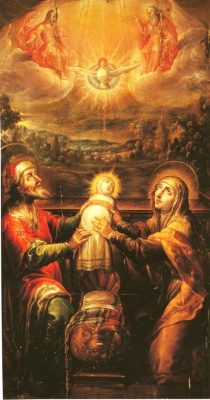 The Italian words “Maria Bambina” mean “Baby Mary.” Although the Holy Childhood of the Blessed Virgin, under the image of Our Lady as an infant, is honored in Mexico, Poland and Italy, relatively few Catholics in the United States know of this devotion. Several saints, including St. John Eudes, St. Joseph Cupertino and St. Padre Pio loved to contemplate the Blessed Mother as a baby. Reflecting on Our Blessed Mother as an infant and child will enrich your love and devotion to her as it did for these saints. As the perfect disciple of Jesus Christ, Our blessed Mother imitated Our Lord in all of His virtues. She imitated, in advance, the virtues of Our Lord’s Holy Childhood.

The simulacrum (image) was modeled in wax in 1735 by Sister Isabella Chiara Fornari (1697-1744), superior of the Poor Clare Sisters in Todi, Italy. Life size waxen images of both the Infant Jesus and the Infant Mary were widely venerated during the counter-reformation (16th century). Bishop Alberico Simonetta brought the waxen image of Maria Bambina to Milan on his return to his native town in 1738. A year or so after his death the Capuchin sisters of the Monastery of St. Maria degli Angeli obtained from his brother the original Maria Bambina. These sisters were entrusted with the image because they were dedicated to the education of the youth and to the teaching of Catholic doctrine. The Capuchin Sisters soon became fervent devotees of the mystery of the Nativity of Mary. 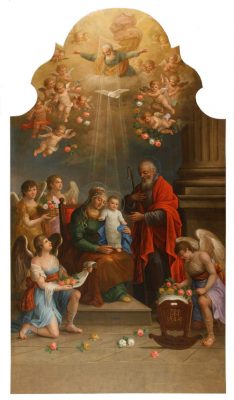 During the suppression of religious congregations under Emperor Joseph II and Napoleon in 1810, the image was in the custody of Sister Barbara Viazzoli, the last Capuchin Sister who had the image in her keeping. She took it with her to the ex-monastery of the Canonichesse Lateranensi in Via dell’ Annunciato where some sisters lived together in private. Upon her death it was given to the pastor of the St. Marco Church, Fr. Luigi Bosisio who in turn entrusted it to Mother Superior Teresa Bosio of the Sisters of Charity at the Ciceri Hospital in 1842. On April 24,1876 the waxen image was brought to its current location at the Motherhouse of the Sisters of Charity.

During this time, devotion to Maria Bambina was mostly limited to the sisters and novices within the religious community. The image was usually exposed in the novitiate and moved to the chapel only on the Nativity of Mary (September 8th) and during the Octave (8-day period of observance including the feast day and the 7 following days). Time and events left their mark on the wax. The face became discolored and unattractive, so much so that “it was more likely to extinguish devotion than to awaken it.” It was then removed from the Novitiate and was placed in a “large chest of drawers”. Each year, it was taken from the chest of drawers and brought to the chapel and displayed only on the Nativity of Mary and during the Octave.

Beginning on September 9, 1884 Maria Bambina rewarded those who had devotion to her. Sister Josephine Woinovich was bedridden and in unbearable pain due to paralysis of her arms and feet. On the 8th of September she begged the Mother General Nazari to bring the image of Maria Bambina to the infirmary to remain near her overnight. The following morning Mother General was inspired to take Maria Bambina, so old, worn, and gray to the other sick sisters in the infirmary so that they could venerate Our Lady’s image. In the infirmary was a devout novice, Giulia Macario, who was unable to move because of her serious illness. With ardent faith, she took the likeness of the Child Mary into her arms and tenderly pleaded with Maria for the grace to regain her health. Immediately she was miraculously cured.

After this miracle, the venerated simulacrum was kept in Mother General Nazari’s room. On October 18, 1884, the Feast of the Motherhood of Mary, Maria Bambina, dressed anew and placed in a beautiful cradle, was carried in a solemn manner and placed between two candelabra in a room on the first floor as its provisional chapel. There the sisters would stop to spend time in prayer on the single bench provided. In the following months, Sister Crocifissa Mismetti and Sister Giuseppa Woinovich were miraculously cured through the intercession of Maria Bambina. Many graces and miracles come from devotion to Maria Bambina. Sister Josephine Woinovich, the sister who originally had asked the Mother General to bring the Baby Mary to the infirmary, also recovered. That is why these Sisters of Charity have become known as the Sisters of Maria Bambina.

On January 16, 1885, the Sisters started noticing an amazing transformation in the image of Maria Bambina which changed from the former dull yellow and gray color to warm flesh hues while its features were becoming so lovely as to make it look like the face of a living baby. From the preface of a booklet published, one comes to know that the “Santa Madonnina [Madonnina – an affectionate diminutive meaning little Madonna] was famous in the city” and that “whole crowds hastened to the simulacrum to venerate the childhood of the Blessed Virgin Mother and obtain from her extraordinary graces.” This same image of Maria Bambina is the one venerated today at the Motherhouse in Milan. 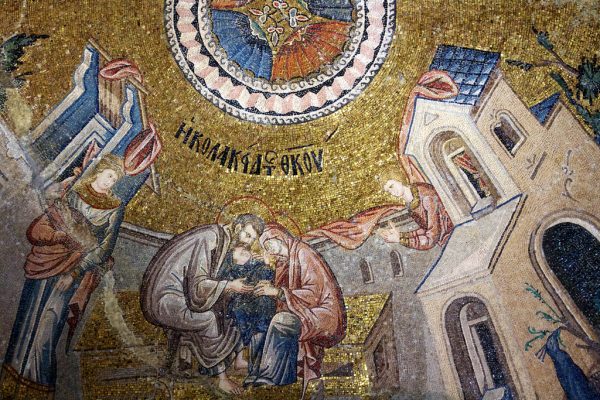 On September 8, 1888 Mother General Clementina Lachmann carried Maria Bambina to the new chapel. Mother General Nazari died in January 1888 without seeing the completion of the chapel she had in mind. Though it was to be a real shrine, the Archbishop of Milan was concerned that pilgrims visiting the chapel was not suited to the Sisters’ retired style of life. However, Maria Bambina had “jealously desired to be inside the Mother House.” The chapel was then open to the public every day from 9:00 AM to 4:00 PM for the people who came from afar to venerate the image.

On May 31, 1904 the image was solemnly crowned by Cardinal Ferrari and on September 9, 1909 Mother Superior Ghezzi obtained from St. Pope Pius X, that a plenary indulgence be gained on September 8 in all the Chapels of the Sisters of Charity. In subsequent years an arch confraternity of Maria Bambina and the “League of the Innocent” were founded. It became the custom to give newly married couples a small wax image of Maria Bambina as a wedding gift. The devotion to Maria Bambina spread from the Milan area to the whole of Italy.

Our Lady also told, to St. Bridget, that when pregnant women would sanctify the evening of the day of her birth by fasting and reciting, with devotion, 9 times the Hail Mary, in honor of the 9 months she had spent in her mother’s womb, and when they frequently who renew this exercise of piety, during the course of their pregnancy, and on the eve of their delivery, by approaching the sacraments with piety, she would bring those prayers before God, and obtain for them a healthy birth even if the conditions were difficult.

During World War II, On October 24, 1942, the Mother House was hit by incendiary bombs. In February, 1942 Mother General Reali had the image carried to a safe place on Via Maggianico. During the days of August 15th and 16th, 1943 with the constant bombing, the shrine and Mother House fell into ruins. However, the destruction of the shrine did not deter the sisters and the people of Milan from celebrating the Feast of the Nativity of Mary on the ruins. On September 4, 1945, Maria Bambina was returned to Milan. After a three day celebration in Her honor, at a nearby chapel of the Visitation, she was provisionally installed in a chapel in the home for the sick at Via Mercalli, which functioned as a temporary Mother House while the current Mother House was under construction. On November 18, 1953 she was taken to the new shrine and on November 21, 1953 the new shrine was consecrated by Cardinal Schuster. Each year on the Feast of the Nativity of Mary, the Sisters touch small pieces of cotton to the miraculous image. These pieces of cotton are then distributed as sacramentals to those who have a devotion to Maria Bambina.

3 thoughts on “Devotion to The Maria Bambina”