The Martyrdom of Ss. Timothy and Maura (3 May) – Till Death Do Us Part

The Martyrdom of Ss. Timothy and Maura

At a time when the Roman emperors maintained an unholy power during a period of great persecution, many martyrs, both male and female, through their witness in many a place proved faithful to Christ. In those years, there was a blessed Timothy of the Penapeian countryside, who held the honourable position of a reader: for he was fervent in the faith and interpreted the holy books for the people. He devoted himself to persuading many to convert from paganism to the Lord. On account of this he was brought to the magistrate of the Thebaid called Arianus. This happened soon after he had consummated his marriage. 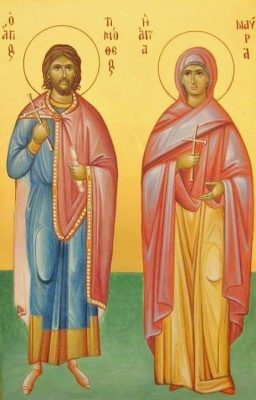 When he was asked for his name and rank, he answered: “My name is Timothy and I am a reader.” The magistrate replied: “And how have you not read the emperors’ law, which orders that those who do not offer sacrifices to the gods are to be executed?” Timothy answered: “Those who have the spirit of Christ do not follow a single word of these laws. But by carefully reading the word in the sacred books, they keep the Law.” The magistrate replied: “Give your books to me as well, so that I may grasp their power.” Timothy answered: “Who would betray his own children to robbers to be slaughtered? But when I converse with these books, I delight above the pleasure of children.” Arianus replied: “Take heed, in case your stubbornness bring you harm. But if you offer a sacrifice to the gods, everything will be forgiven.” Timothy answered: “Since I am a Christian, I honour no other god but the true One.” 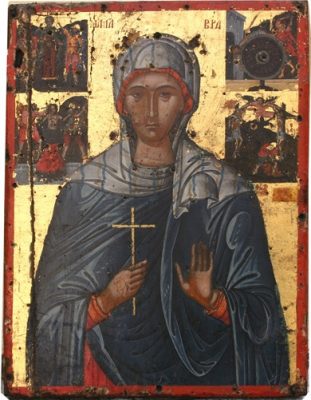 Thereupon, the magistrate became angry, ordered that hot iron spits be thrust in his ears, and said: “Such punishments await those who refuse to obey royal decrees.” And from the fire’s steam and the raging flame the pupils of his eyes leapt out. Then he ordered that his ankles be tied to a wheel and having tied his hands behind him, he had a cloth put in his mouth and had him hanged upside down. Since Timothy continued to give thanks to the Lord during his suffering, the magistrate ordered for his wife, Maura, to be brought forth: for he had learned that Timothy was newlywed and only twenty days had passed since they got married. 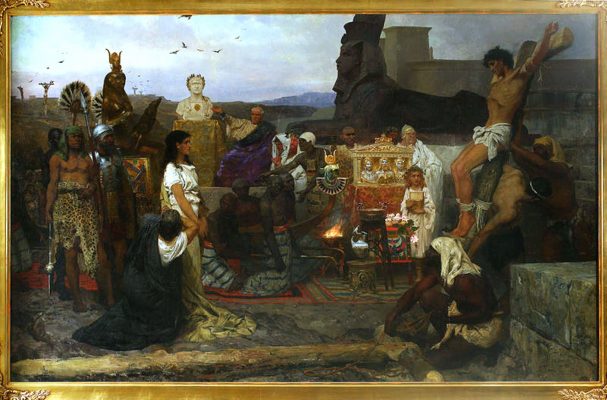 Arianus spoke in secret to Maura: “See, your irrational husband, has decided to die and leave you a widow. Go to him; advise him to offer sacrifices to the gods and be set free.” After these words, he persuaded Maura and she left. The crying Maura started wooing the saint with words, but Timothy saw through her schemes and loathsomely replied: “Truly after you left the house, you have conspired with the devil. Are you not aware, oh wretched woman, of what you are advising? Instead, you should die together with me for Christ and live unto eternity.”

Through the martyr’s words, Maura came immediately to her senses. She returned to the magistrate exclaiming: “Oh tyrant! Place me beside my most god-loving husband, because we are both Christian and choose to die for Christ.” Then the magistrate ordered her hair to be pulled out, and the fingers on which she wore rings cut off and thrown away. He also had a cauldron filled with water and heated and then ordered that she be thrown in it. Seeing her rejoicing as if in a bath, Arianus stood up and approached, and thinking that the cauldron was not properly heated, told her: “Pour some (of the water) over my hands.” She did it, and immediately the skin peeled off from the magistrate’s hands. Consumed by anger, he had her taken out (of the cauldron), commanded that her mouth be filled with burning coal and had her body scorched with lit torches. 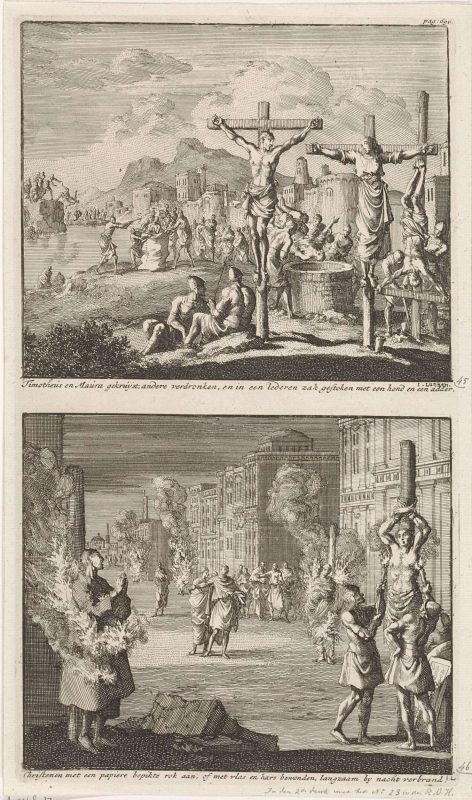 The magistrate was startled by the steadfastness of the saints. So, he ordered the two of them to be crucified facing each other. Upon his orders, they crucified Timothy and Maura face to face. There they remained on the crosses alive for nine days. For, the servants of lawlessness did nothing else to help them die more quickly but only bound them to the crosses. Both husband and wife reassured each other to endure with encouraging words whilst they remained capable of speaking. When Maura is said to have been tempted, she addressed Timothy: “Pray, my lord, for the devil exhausts me with foul words and apparitions.” Upon Timothy’s tearful prayers, the evil delusional force of the enemy pulled back. And the angels showed Maura, who appeared to be in a state of ecstasy, the joy she was to receive. As they revealed the exceeding and awesome glory, the angels cried: “This is the glory of your husband, for he became your guide to salvation.” Maura narrated everything she saw to her husband. Many people were present, including her mother together with Timothy’s father, who was a priest. When Timothy and Maura could no longer speak, they continued to pray in their minds and by moving their lips. And so, they delivered their souls giving thanks to the Lord, to whom be glory and power, now and ever and unto the ages of ages. Amen. 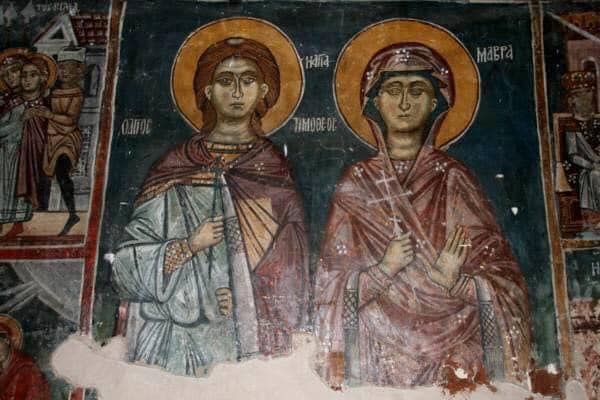 4 thoughts on “The Martyrdom of Ss. Timothy and Maura (3 May) – Till Death Do Us Part”