From the section in Christmas after Compline 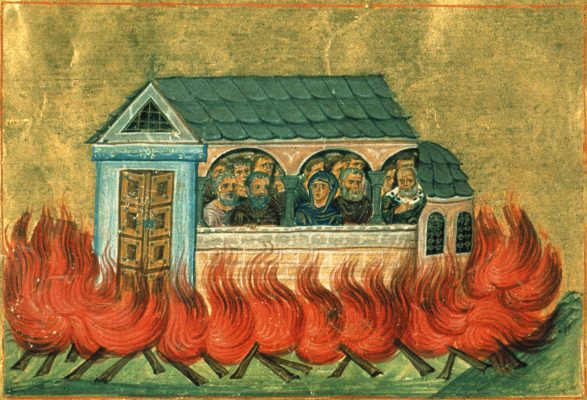 ​
Let us give the holy Martyrs a thought, whose memory is offered to our veneration by the Church in her Martyrology of this Christmas season. Diocletian and his colleagues in the Empire had recently published the famous edict of persecution, which waged against the Church the fiercest war she has ever sustained. The edict was torn down from the Emperor’s palace at Nicomedia by one of the Christians, who paid for this holy daring by a glorious martyrdom. The faithful of the same city were ready for the combat, and feared not to brave the Emperor’s power by continuing to frequent their Church, which was condemned to be pulled down.

Christmas Day came, and several thousands of them had assembled there, in order to celebrate, for the last time within those walls, the Nativity of our Savior. Being informed of it, the Emperor became furious, and sent one of the officers of his court to order the Church doors to be fastened, and a fire to be enkindled on each side of the building. This being done, the clang of trumpets was heard, and then a herald’s voice proclaiming to the faithful, in the Emperor’s name, that they who wished to save their lives would be permitted to leave the Basilica, on the condition of their offering incense on an altar of Jupiter, which had been placed near the door; but that otherwise, all were to be left a prey to the flames. One of the Christians thus answered, in the name of the whole assembly: “We are all of us Christians; we honor Christ as the one only God and King; and we are all ready to lay down our lives for him on this Day.” Where upon the soldiers were commanded to set fire to the Church. In a very short time, it was one immense mass of flames, whence was offered to the Son of God — who deigned to begin on this same day the human life he had assumed — the generous holocaust of these thousands of lives, laid down as witness to his having come into this world. Thus was glorified, in the year 303, Emmanuel, who had come from Heaven to dwell among us. Let us, after the example of the Church herself, join our homage to the Babe of Bethlehem with that offered him by these courageous Christians, whose fame the Liturgy will perpetuate even to the end of time.

Once more let us visit in spirit the dear Cave, where Mary and Joseph are loving and nursing and adoring the Divine Infant. Let us, too, adore him, and ask his blessing. St Bonaventure, with an unction worthy of his seraphic soul, thus expresses the sentiments which a Christian should have on this Day, when admitted to the Crib of Jesus: “Do thou also kneel down — thou hast delayed too long. Adore the Lord thy God, and then reverence his Mother, and salute, with much respect, the saintly old man Joseph. After this, kiss the feet of the Infant Jesus, laid as he is on his little bed, and ask our Lady to give him to thee, or permit thee to take him up. Take him into thine arms, press him to thy heart, and look well at his lovely face, and reverently kiss him, and show him confidently the delight thou takest in him. Thou mayest venture on all this, because it is for sinners that he came, that he might save them: it was with sinners that he so humbly conversed, and at last gave himself to sinners, that he might be their food. I say, then, that his gentle love will permit thee to treat him as affectionately as thou pleasest, and will not call it too much freedom, but will set it down to thy love.” (Meditations on the Life of Christ, by St Bonaventure.) 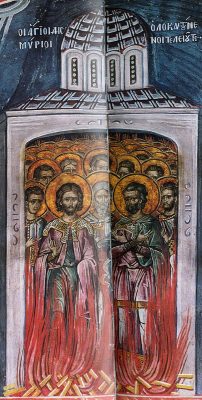 The Holy 20,000 Martyrs of Nicomedia – Commemorated on December 28 9in the Byzantine Calendar)

The Holy 20,000 Martyrs of Nicomedia: At the beginning of the fourth century the emperor Maximian (284-305) gave orders to destroy Christian churches, to burn service books, and to deprive all Christians of rights and privileges of citizenship. At this time the bishop of the city of Nicomedia was St Cyril, who by his preaching and life contributed to the spread of Christianity, so that many members of the emperor’s court were also secret Christians.

The pagan priestess Domna was living in the palace at that time. Providentially, she obtained a copy of the Acts of the Apostles and the Epistles of St Paul. Her heart burned with the desire to learn more about the Christian teaching. With the help of a young Christian girl, Domna went secretly to Bishop Anthimus (Cyril’s successor) with her faithful servant, the eunuch Indes. St Anthimus catechized them, and both received holy Baptism.

Domna began to help the poor: she gave away her valuables with the assistance of Indes, and she also distributed food from the imperial kitchen. The chief eunuch, who was in charge of provisions for the imperial household, found out that Domna and Indes were not eating the food sent them from the emperor’s table. He had them beaten in order to find out why they did not partake of the food, but they remained silent. Another eunuch informed him that the saints were distributing all the emperor’s gifts to the poor. He locked them up in prison to exhaust them with hunger, but they received support from an angel and did not suffer. St Domna feigned insanity so she wouldn’t have to live among the pagans. Then she and Indes managed to leave the court, and she went to a women’s monastery. Abbess Agatha quickly dressed her in men’s clothing, cut her hair and sent her off from the monastery.

During this time the emperor returned from battle and ordered that a search be made for the former pagan priestess Domna. The soldiers sent for this purpose found the monastery and destroyed it. The sisters were thrown into prison, subjected to torture and abuse, but not one of them suffered defilement. Sent to a house of iniquity, St Theophila was able to preserve her virginity with the help of an angel of the Lord. The angel led her from the brothel and brought her to the cathedral.

At this time the emperor cleared the city square to offer sacrifice to the pagan gods. When they began sprinkling the crowd with the blood of the sacrificial animals, Christians started to leave the square. Seeing this, the emperor became enraged, but in the middle of his rantings a great thunderstorm sprang up. People fled in panic, and the emperor had to retreat to the palace for his own safety.

Later Maximian went to the church with soldiers and told them they could escape punishment if they renounced Christ. Otherwise, he promised to burn the church and those in it. The Christian presbyter Glycerius told him that Christians would never renounce their faith, even under the threat of torture. Hiding his anger, the emperor exited the church, and a short time later commanded the presbyter Glycerius be arrested for trial. The executioners tortured the martyr, who did not cease to pray and to call on the Name of the Lord. Unable to force St Glycerius stop confessing Christ, Maximian ordered him to be burned to death.

On the Feast of the Nativity of Christ in the year 302, when about 20,000 Christians had assembled at the cathedral in Nicomedia, the emperor sent a herald into the church. He told the Christians that soldiers were surrounding the building, and that anyone who wished to leave had to offer sacrifice to the pagan gods. Anyone who defied the emperor would perish when the soldiers set fire to the church. All those present refused to worship the idols.

As the pagans prepared to set fire to the church, Bishop Anthimus, baptized all the catechumens and communed everyone with the Holy Mysteries. All 20,000 of those praying died in the fire. Among them were the abbess Agatha and St Theophila who had been saved from the den of iniquity by a miracle. Bishop Anthimus, however, managed to escape the fire [while later he was martyred for Christ, and he is celebrated September 3]. 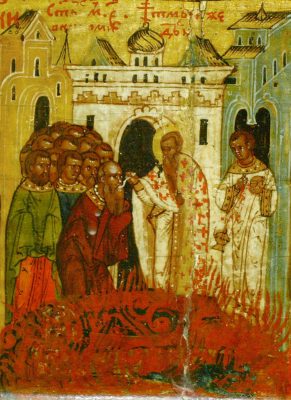 Maximian thought that he had exterminated all the Christians of Nicomedia. He soon learned that there were many more, and that they would confess their faith and were prepared to die for Christ. The emperor wondered how to deal with them. At his command they arrested the regimental commander Zeno, who was openly criticizing the emperor for his impiety and cruelty. Zeno was fiercely beaten and finally beheaded. They jailed the eunuch Indes, formerly a priest of the idols, for refusing to participate in a pagan festival.

The persecution against Christians continued. Dorotheus, Mardonius, Migdonius the deacon and others were thrown into prison. Bishop Anthimus encouraged them by sending letters to them. One of the messengers, the Deacon Theophilus, was captured. They subjected him to torture, trying to learn where the bishop was hiding. The holy martyr endured everything, while revealing nothing. Then they executed him and also those whom the bishop had addressed in his letter. Though they were executed in different ways, they all showed the same courage and received their crowns from God.

For weeks, St Domna concealed herself within a cave and sustained herself by eating plants. When she returned to the city, she wept for a long time at the ruins of the church, regretting that she was not found worthy to die with the others. That night she went the sea shore. At that moment fishermen pulled the bodies of the martyrs Indes, Gorgonius and Peter from the water in their nets.

St Domna was still dressed in men’s clothing, and she helped the fishermen to draw in their nets. They left her the bodies of the martyrs. With reverence she looked after the holy relics and wept over them, especially over the body of her spiritual friend, the Martyr Indes.

After giving them an honorable burial, she did not depart from these graves so dear to her heart. Each day she burned incense before them, sprinkling them with fragrant oils. When the emperor was told of an unknown youth who offered incense at the graves of executed Christians, he gave orders to behead the youth. The Martyr Euthymius was also executed along with Domna. 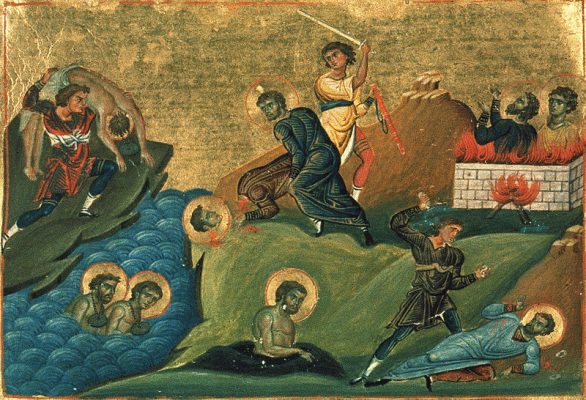 A divine army, a holy city, a people surrounded by the Lord, you were shown, O 20,000 martyrs, for being refreshed with His love, you completed your struggle by fire. But entreat the Lord, O wise ones, that mercifully, we be granted the great mercy.

Kontakion – Tone 1
Their souls strengthened by faith, the twenty thousand martyrs accepted their suffering by fire, and cried out to You, the One born of the Virgin: “Like gold, myrrh, and frankincense, the gifts of the Persian kings, receive our whole burnt offering, O Eternal God.”
(http://oca.org/FStropars.asp?SID=13&ID=103664)

Trophy-bearing phanalnx of athletes, and holy lot, O 20,000 Champions, gathered from every generation and every age, you were shown by God.