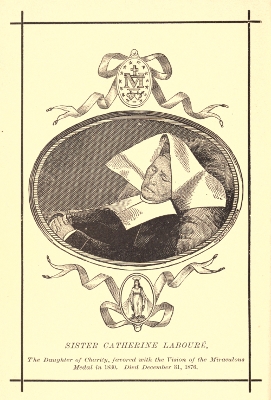 SISTER CATHERINE LABOURÉ,
The Daughter of Charity, favored with the Vision of the Miraculous Medal in 1830.
Died December 31, 1876.

TRANSLATED FROM THE FRENCH,

TO: The Most Compassionate Virgin Mary, mother of god, conceived without sin.

Oh Mary, conceived without sin, Virgin incomparable, august Mother of Jesus, thou who hast adopted us for thy children, and who hast given us so many proofs of thy maternal tenderness, deign to accept this little book, feeble token of our gratitude and love!

Oh! may it be instrumental in attracting and attaching inviolably to thee, the hearts of all who read it!

O Mary, conceived without sin, pray for us who have recourse to thee!

In conformity with the decree of Pope Urban VIII, we declare that the terms miracle, revelation, apparition and other expressions of a similar nature here employed, have, in our intention, no other than a purely historical value, and that we submit unreservedly the entire contents of this book to the judgment of the Apostolic See.

PREFACE OF THE AMERICAN PUBLISHER.

Since the hour when the Beloved Disciple took the Blessed Virgin to his own, the followers of her Divine Son have always cherished a reverential affection for her above all other creatures. They have regarded her as the ideal of all that is true and pure and sweet and noble in the Christian life, and they have honored her as the most favored of mortals, the greatest of saints, the masterpiece of the Almighty. The peculiar veneration paid to her by the Apostles, was caught up by the first Christians, who regarded her with awe because of her great dignity; and when she died, her memory was held in benediction. But death could not sever her from those who, in the person of St. John, had been given to her for her children. She still lived for the Church. From the time when the faithful took refuge in the Catacombs to the fifth century, when the Council of Ephesus solemnly sanctioned the homage paid to her as the Mother of God, her intercession was often invoked; and from that day, devotion towards her has increased until our own age, when the nations of the earth unite to proclaim her Blessed.

Often has Mary given signal proofs of the pleasure she takes in the devotion of her clients and of the power she possesses to grant their petitions. Graces asked through her mediation have been suddenly obtained; wonders in the way of cures and conversions have been wrought at her shrines; disasters have been averted; plagues have been made to cease; and, to crown all her favors, apparitions have occurred, in which she has shown herself, radiant with the lustre of Heaven, to her loyal servants; and, in some instances, she has left something like the scapular, the Miraculous Medal and the fount in the grotto of Lourdes, as memorials of her visit.

These manifestations of her maternal solicitude have of late been more frequent, more renowned, and more efficacious than ever. As the end draws near and the dangers increase, her anxiety for the sanctification of her own bursts its bonds and urges her to find new ways to the hearts of men. Among the most recent of these demonstrations, the Miraculous Medal is one of the most remarkable. How it originated, how rapidly and widely it has circulated, and how gloriously it has fulfilled its mission, are told in this book. A more interesting and edifying history could not easily have been written. To all children of Mary, in America as elsewhere, it will be welcome, and for them this edition has been prepared by

PREFACE TO THE FRENCH EDITION

The eighth and last edition of THE HISTORY OF THE MIRACULOUS MEDAL, extending up to the year 1842, has for a long time been out of print. More than once efforts have been made to have a new edition published, but until now they have failed. The recent death of the Sister who was favored with the Blessed Virgin’s confidence, has again excited a general desire for the work; for many persons are eager to learn the origin of the medal, and others hope to get the full particulars of it. For these reasons, the present edition has been undertaken.

Believing that it would gratify our readers, we have placed at the beginning of the book a biographical sketch of the privileged Sister, Catherine Labouré, and to it we have added some notes concerning M. Aladel, her Director, who was the author of the previous editions.

These editions of the History presented but a very condensed account of the apparition of the Blessed Virgin in 1830; for serious reasons induced M. Aladel to suppress many things. He feared especially to attract attention to the humble daughter who had transmitted Heaven’s orders, and who, it was best, should remain unknown to the end of her life.

Now, these fears are no longer an obstacle, and we are permitted to publish, for the edification of the faithful, all that the Sister revealed, at least, all that we still possess of these communications. At the time of the last edition, M. Aladel could understand but imperfectly the import of the vision of the medal, but certain events of subsequent occurrence, have placed this important revelation in a clearer light, and fully established its connection with the past and the future. We have endeavored to show the designs of Providence, by proving that the apparition of 1830 was not an isolated fact; that it marked the end of a disastrous period for the Church and society; that it was the beginning of a new era, an era of mercy and hope; that it was a preparation for the definition of the Immaculate Conception as a dogma of faith; in fine, that it was the first of a series of supernatural manifestations, which have greatly increased devotion to the Blessed Virgin, insomuch, that our age may justly be styled the age of Mary.

We have judged it advisable to omit quite a number of miraculous occurrences related in the preceding editions, and substitute for them others not less authentic, but more recent, thus demonstrating that the medal is as efficacious in our days, as it was at the time of its origin.

Table of Engravings of the Miraculous Medal