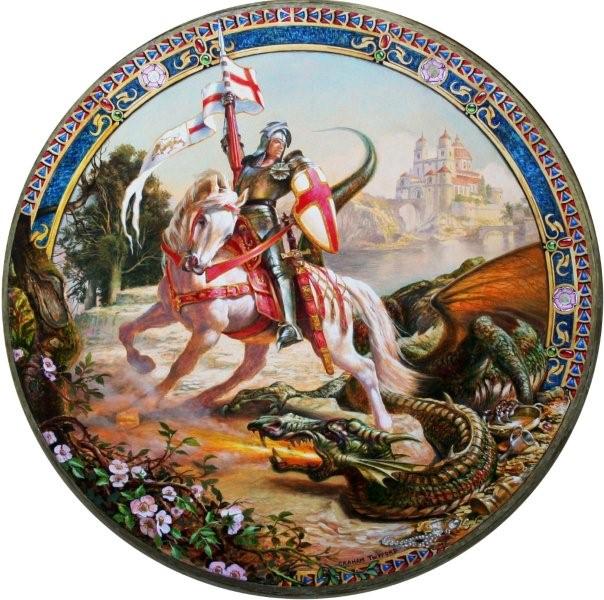 Clad in his bright coat of mail, mounted on his war steed, and spearing the dragon with his lance, George, the intrepid champion of our Risen Jesus, comes to gladden us today with his feast. From the East, where he is known as the great Martyr, devotion to St. George soon spread in the Western Church, and our Christian armies have always loved and honored him as one of their dearest patrons. His martyrdom took place in Paschal Time; and thus he stands before us as the guardian of the glorious sepulcher, just as Stephen, the Protomartyr, watches near the crib of the Infant God. 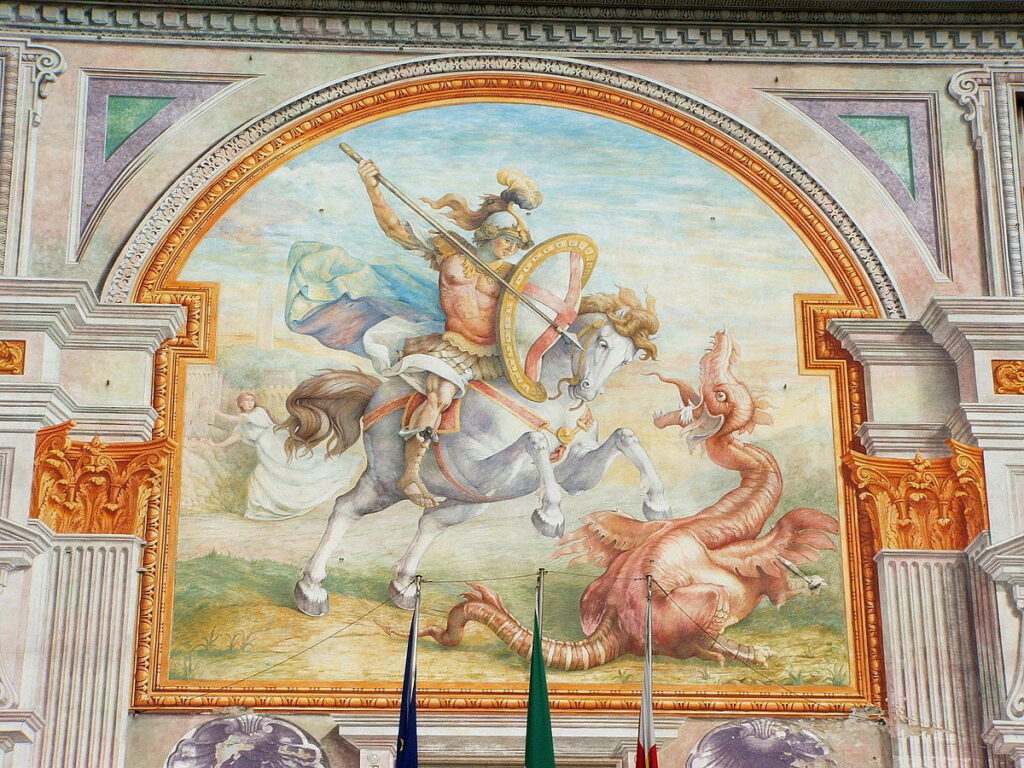 The Roman Liturgy gives no lessons on the life of St. George, but in their stead, reads to us a passage from St. Cyprian on the sufferings of the martyrs. This derogation from the general rule dates from the fifth century. At a celebrated Council held in Rome in the year 496, Pope St. Gelasius drew up, for the guidance of the faithful, a list of books which might or might not be read without danger. Among the number of those that were to be avoided, he mentioned the Acts of St. George as having been compiled by one who, besides being an ignorant man, was also a heretic. In the East, however, there were other Acts of the holy martyr, totally different from those current in Rome; but they were not known in that city. The cultus of St. George lost nothing in the holy city by this absence of a true legend. From a very early period, a church was built in his honor; it was one of those that were selected as Stations, and give a Title to a Cardinal; it exists to this day and is called Saint George in Velabro (the Veil of Gold). 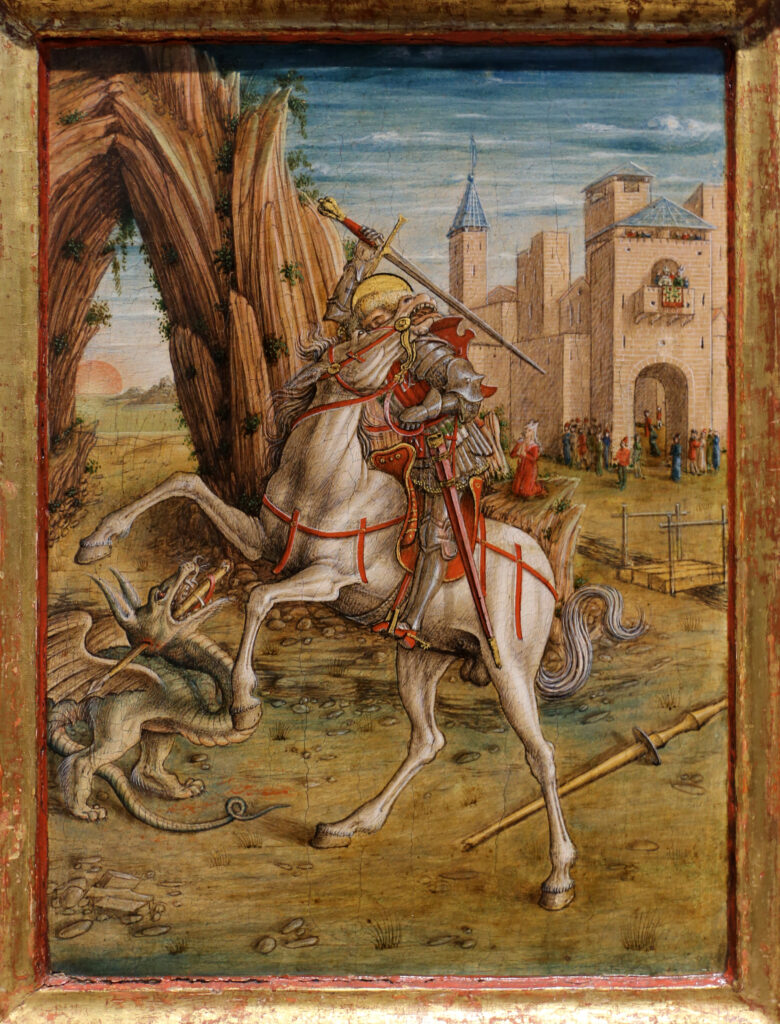 The Bollandists were in possession of several copies of the forbidden Acts; they found them replete with absurd stories, and, of course, they rejected them. Father Papebroch has given us other and genuine Acts written in Greek, and quoted by St. Andrew of Crete. They bring out the admirable character of our martyr, who held an important post in the Roman army during the reign of the Emperor Diocletian. He was one of the first victims of the great persecution and suffered death at Nicomedia. Alexandra, the Emperor’s wife, was so impressed at witnessing the Saint’s courage that she professed herself a Christian, and shared the crown of martyrdom with the brave soldier of Christ.

As we have already said, devotion to St. George dates from a very early period. St. Gregory of Tours gives us several proofs of its having taken root in Gaul. St. Clotilde had a singular confidence in the holy martyr, and dedicated to him the Church of her dear Abbey of Chelles. But this devotion became more general and more fervent during the Crusades, when the Christian armies witnessed the veneration in which St. George was held by the Eastern Church, and heard the wonderful things that were told of his protection on the field of battle. The Byzantine historians have recorded several remarkable instances of the kind; and the Crusaders returned to their respective countries publishing their own experience of the victories gained through the Saint’s intercession. The Republic of Genoa chose him for its patron; and Venice honored him as its special protector, after St. Mark. But nowhere was St. George so enthusiastically loved as in England. Not only was it decreed in a Council held at Oxford, in the year 1222, that the feast of the Great Martyr should be observed as one of obligation; not only was the devotion to the valiant soldier of Christ encouraged throughout Great Britain by the first Norman Kings; but there are documents anterior to the invasion of William the Conqueror which prove that St. George was invoked as the special patron of England even so far back as the ninth century. Edward III did but express the sentiment of the country when he put the Order of the Garter, which he instituted in 1330, under the patronage of the warrior Saint. In Germany, King Frederic III founded the Order of St. George in the year 1468. 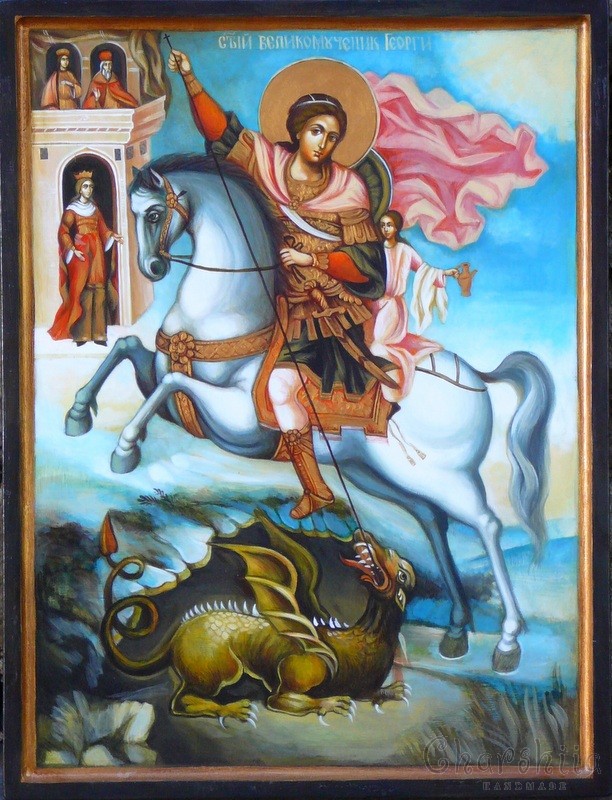 St. George is usually represented as killing a dragon; and where the representation is complete, there is also given the figure of a princess, whom the Saint thus saves from being devoured by the monster. This favorite subject of both sacred and profane art is purely symbolical, and is of Byzantine origin. It signifies the victory won over the devil by the martyr’s courageous profession of faith; the princess represents Alexandra, who was converted by witnessing the Saint’s heroic patience under his sufferings. Neither the Acts of St. George nor the hymns of the Greek Liturgy allude to the martyr’s having slain a dragon and rescued a princess. It was not till after the fourteenth century that this fable was known in the West; and it arose from a material interpretation of the emblems with which the Greeks honored St. George, and which were introduced among us by the crusaders. 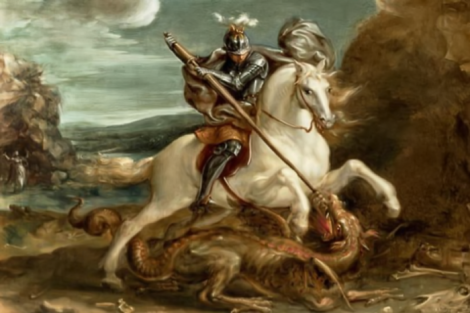 Although, as has been said, the Office of St. George in the Roman Breviary has been taken from the Common of Martyrs in Paschal Time, the following historical lesson has recently been approved for the Dioceses of England: 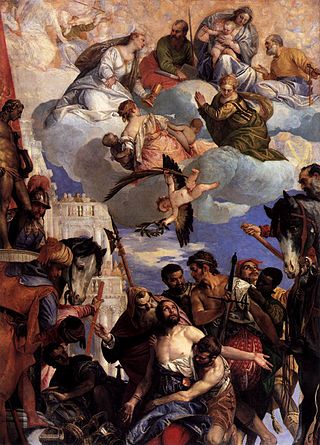 Let us, in honor of our glorious patron, recite the following stanzas, taken from the Menæa of the Greek Church:

Thou, O George, art the glorious type of a Christian soldier. While serving under an earthly monarch, thou didst not forget thy duty to the King of heaven. Thou didst shed thy blood for the faith of Christ; and he, in return, appointed thee protector of Christian armies. Be their defender in battle, and bless with victory them that fight in a just cause. Protect them under the shadow of thy standard; cover them with thy shield; make them the terror of their enemies. Our Lord is the God of Hosts; and he frequently uses war as the instrument of his designs, both of justice and mercy. They alone win true victory who have heaven on their side; and such soldiers, when on the battlefield, seem to the world to be doing the work of man, whereas it is the work of God they are furthering. Hence are they more generous, because more religious, than other men. The sacrifices they have to make, and the dangers they have to face, teach them unselfishness. What wonder, then, that soldiers have given so many martyrs to the Church! 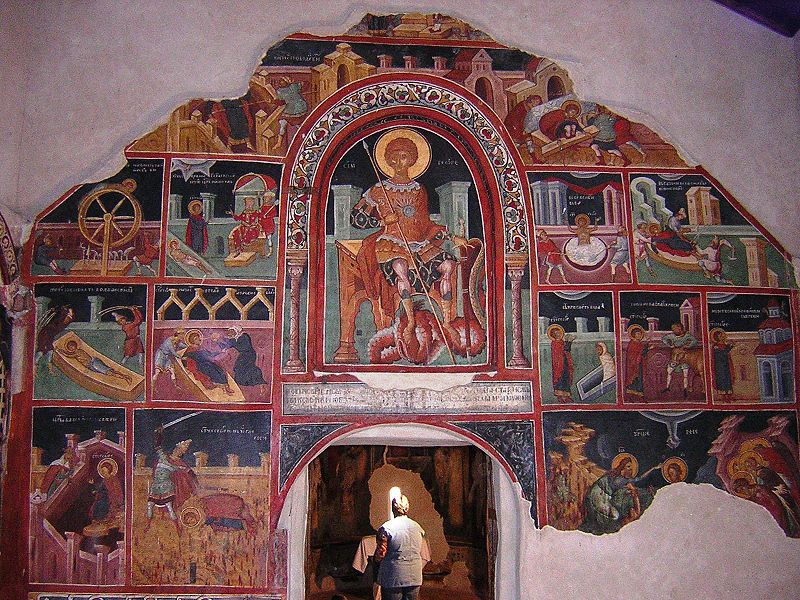 But there is another warfare, in which we Christians are all enlisted, and of which Paul speaks, when he says: Labor as a good soldier of Christ; for no man is crowned, save he that striveth lawfully. That we have thus to strive and fight during our life, the same Apostle assures us in these words: Take unto you the armor of God, that ye may be able to resist in the evil day, and to stand in all things perfect. Stand, therefore, having your loins girt about with truth, and having on the breastplate of justice, and your feed shod with the preparation of the Gospel of peace. In all things taking the shield of faith, wherewith ye may be able to extinguish all the fiery darts of the most wicked one. And take unto you the helmet of salvation, and sword of the spirit, which is the word of God. We, then, are soldiers, as thou wast, O holy martyr! Before ascending into heaven, our divine leader wishes to review his troops; do thou present us to him. He has loaded us with honors, notwithstanding our past disloyalties; we must, henceforth, prove ourselves worthy of our position. In the Paschal Communion which we have received, we have a pledge of victory; how can we ever be so base as to permit ourselves to be conquered! Watch over us, O sainted warrior! Let thy prayers and example encourage us to fight against the dragon of hell. He dreads the armor we wear; for it is Jesus himself that prepared it for us, and tempered it in his own precious Blood; may we, like thee, present it to him whole and entire, when he calls us to our eternal rest! 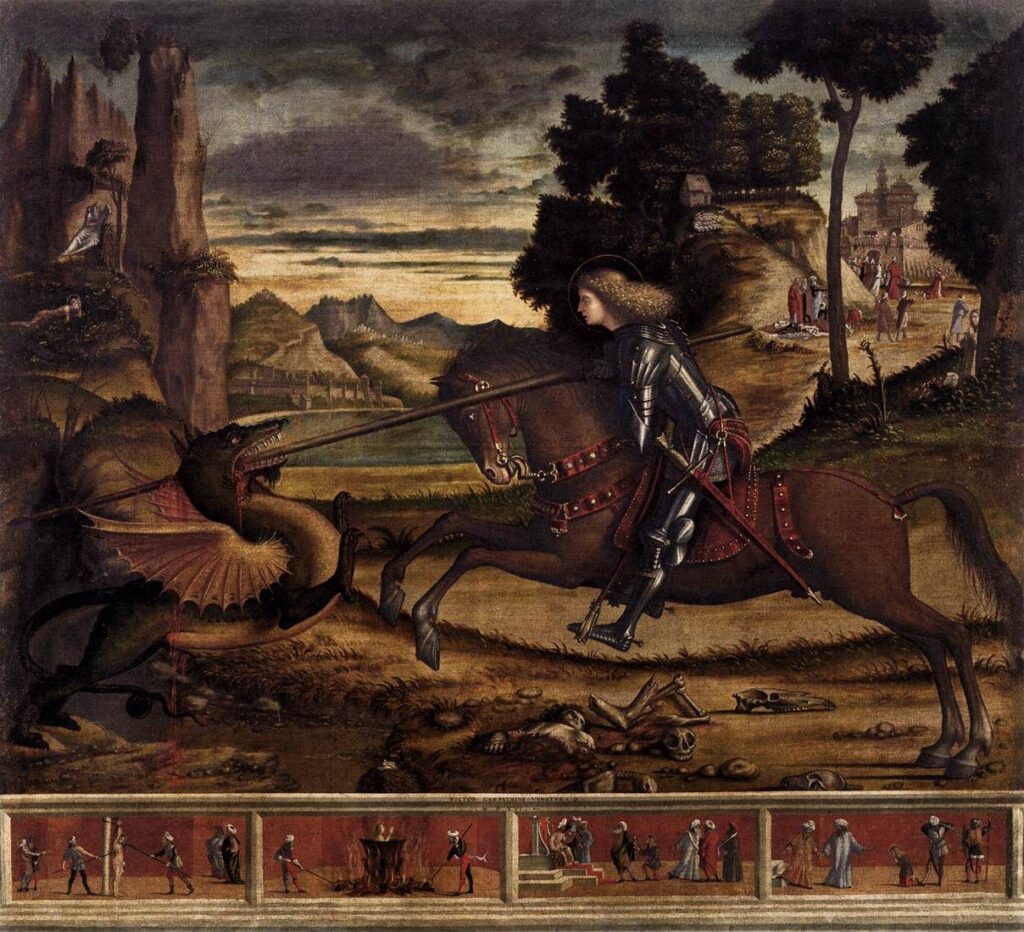 There was a time when the whole Christian world loved and honored thy memory with enthusiastic joy: but now, alas! this devotion has grown cold, and thy feast passes unnoticed by thousands. O holy martyr! avenge this ingratitude by imitating thy divine King, who maketh his sun to rise upon both good and bad; take pity on this world, perverted as it is by false doctrines, and tormented at this very time by the most terrible scourges. Have compassion on thy dear England, which has been seduced by the dragon of hell, and by him made the instrument for effecting his plots against the Lord and his Christ. Take up thy spear as of old; give the monster battle, and emancipate the isle of Saints from his slavish yoke. Heaven and earth join in this great prayer! In the name of our Risen Jesus, aid thine own and once devoted people to a glorious resurrection! 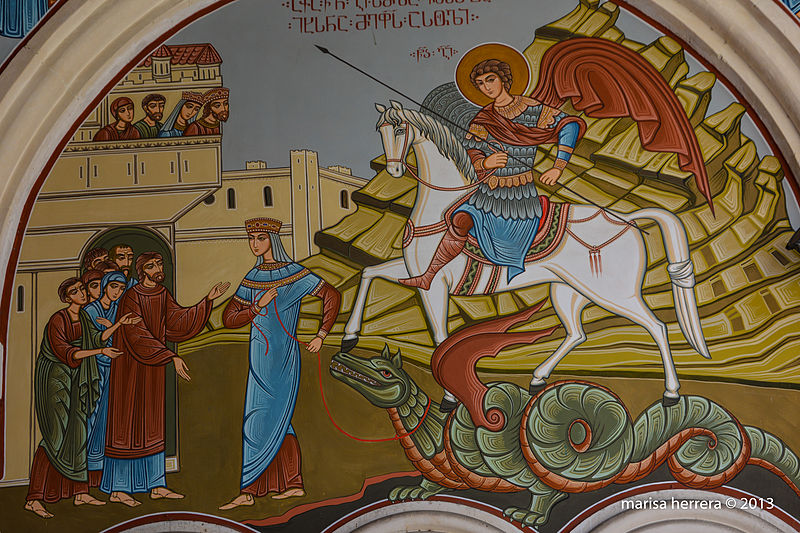