THE THIRD SUNDAY AFTER THE EPIPHANY

We have kept for the end of this volume the five following Sundays, in order not to interrupt the order of the Feasts, which are kept during the forty days of Christmastide; as also, because the variation of Easter Sunday necessitates, almost every year, a different arrangement from that in which they stand in the Missal. Septuagesima often comes in January, and the Feast of the Purification is occasionally later than Quinquagesima Sunday. We were obliged to provide for these changes, and simplify them for the Faithful, by adopting our present plan.

It also happens, that the 3rd and 4th Sundays after the Epiphany, (even in years when they could be kept,) have to be omitted, owing to the occurrence of a Double feast: and feasts of this class are frequent (During the last fifteen days of January. In this case, the Church simply makes a commemoration of the occurring Sunday, at the Collect, Secret, and Post-communion; and the Gospel of the Sunday is read in place of St. John’s, at the end of Mass.

The Sundays of Septuagesima, Sexagesima, and Quinquagesima, take precedence of Double feasts; and, as we have already noticed, the Purification itself is deferred till the following day, if it fall on any of these three Sundays.

Mass.—The Introit represents the Angels of God adoring him on his entrance into this world, as St. Paul explains this passage of the Psalms. The Church celebrates, with David, the gladness of Sion, and the joy of the daughters of Juda.

The third Prayer is one of the following:

This love of our neighbor, recommended to us by the Apostle, is a consequence of that universal brotherhood, which our Savior, by his Birth, brought us from heaven. He came to establish peace between heaven and earth; men, therefore, ought to be at peace one with another. Our Lord bids us not to be overcome by evil, but to overcome evil by good:—and did not he first practice this by coming among us, who were children of wrath, that he might make us children of adoption by his humiliations and his sufferings?

In the Gradual, the holy Church again celebrates the coming of the Emmanuel, and invites all nations, and all the kings of the earth, to come and praise his holy name.

The human race was infected the leprosy of sin: the Son of God touches it by the mystery of the Incarnation, and restores it to health. But he requires that the sick man, now that he is healed, shall go and show himself to the Priest, and comply with the ceremonies prescribed by the law; and this to show that he allows a human priesthood to cooperate in the work of our salvation. The vocation of the Gentiles, of which the Magi were the first fruits, is again brought before us in the faith of the Centurion. A Roman Soldier, and millions like him, shall be reputed as true children of Abraham, Isaac, and Jacob; while they who are the sons of this Patriarch according to the flesh, shall be cast out from the feast chamber into the gloom of blindness; and their punishment shall be given as a spectacle to the whole earth.

Let men, then, saved as he has been by the coming of the Emmanuel, sing a hymn of praise to the power of the God who has wrought our salvation by the strength of his almighty arm. Man had been sentenced to death; but now that he has God for a Brother, he shall not die: he will live: and could he spend his life better than in praising the works of this God that has saved him? 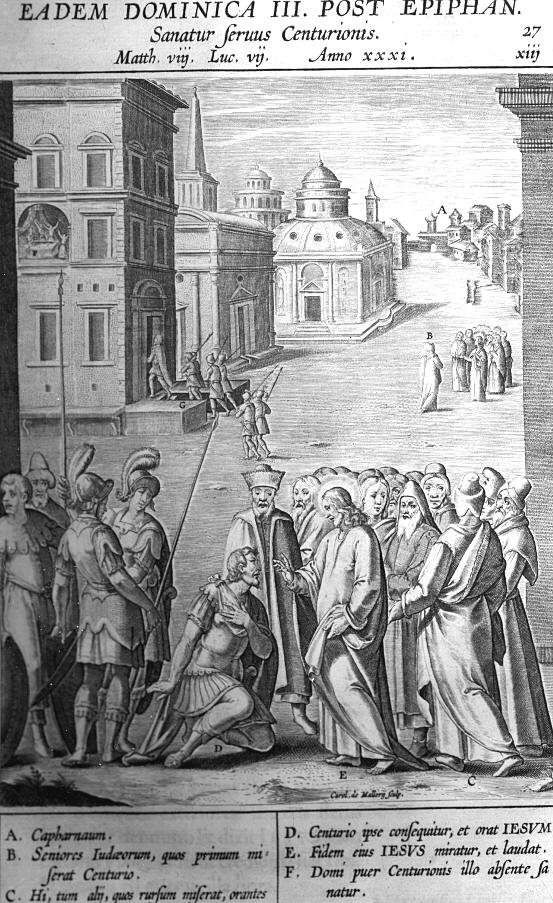 After having distributed the Bread of Life, the Church reminds us how the people were in admiration at the words of Jesus. The children of the Church, initiated into all his Mysteries are, at this moment, enjoying the effects of that ineffable Word, by means of which the Redeemer has changed the bread into his Body, and the wine into his Blood.

The Psalms, Antiphons, Capitulum, Hymn, and Versicle, are given above: Vespers for Sundays and Feasts during Christmas.