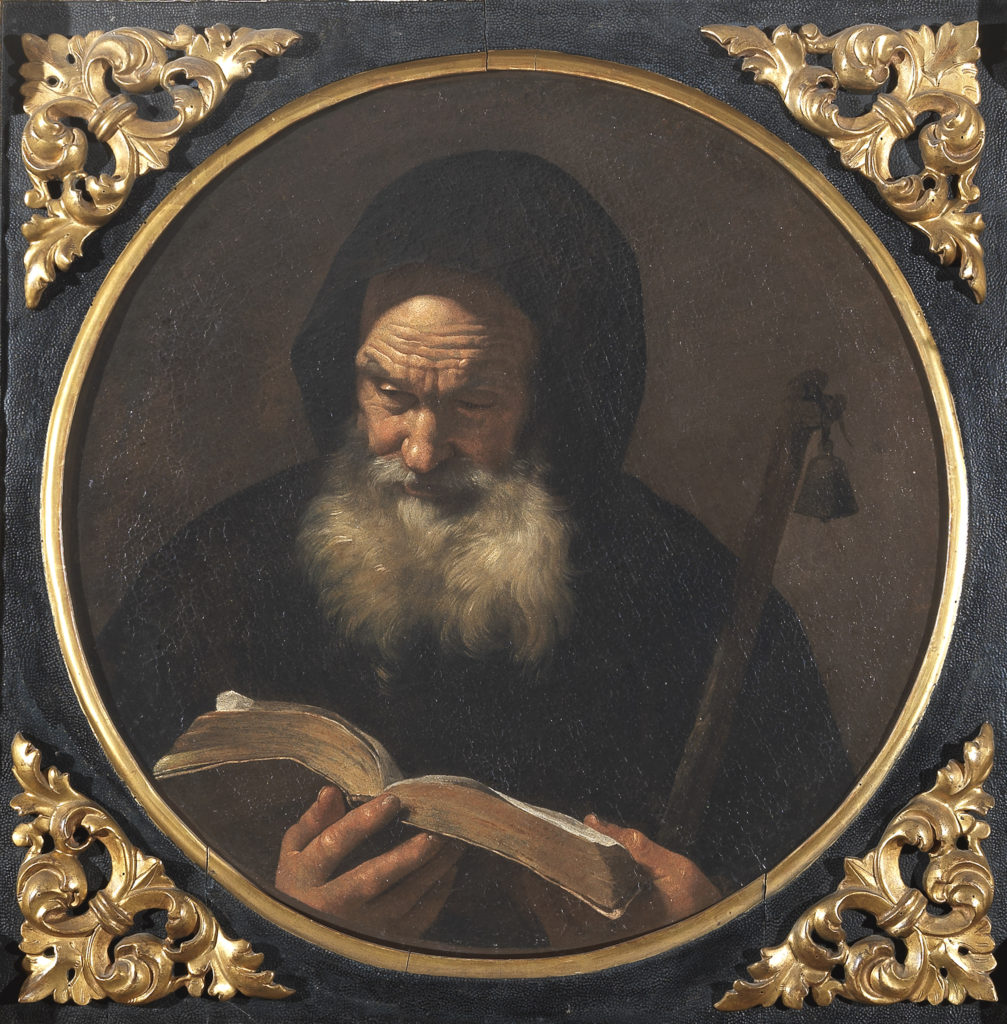 The East and West unite, to-day, in honouring St. Antony, the Father of Cenobites. The Monastic Life existed before his time, as we know from in-disputable testimony; but he was the first Abbot, because he was the first to bring Monks under the permanent government of one Superior or Father.

Antony began with seeking solely his own sanctification; he was known only as the wonderful Solitary, against whom the wicked spirits waged an almost continued battle: but, in course of time, men were attracted to him by his miracles and by the desire of their own perfection ; this gave him Disciples; he permitted them to cluster round his cell; and Monasteries thus began to be built in the desert. The age of the Martyrs “was near its close; the persecution under Dioclesian, which was to be the last, was over as Antony entered on the second half of his course: and God chose this time for organizing a new force in the Church. The Monastic Life was brought to bear upon the Christian world; the Ascetics, as they were called, not even such of them as were consecrated — were not a sufficient element of power. Monasteries were built in every direction, in solitudes and in the very cities; and the Faithful had but to look at these communities living in the fervent and literal fulfillment of the Counsels of Christ, and they felt themselves encouraged to obey the Precepts. The apostolic traditions of continual prayer and penance were perpetuated by the Monastic system; it secured the study of the Sacred Scriptures and Theology ; and the Church herself would soon receive from these arsenals of intellect and piety her bravest defenders, her holiest Prelates, and her most zealous Apostles. 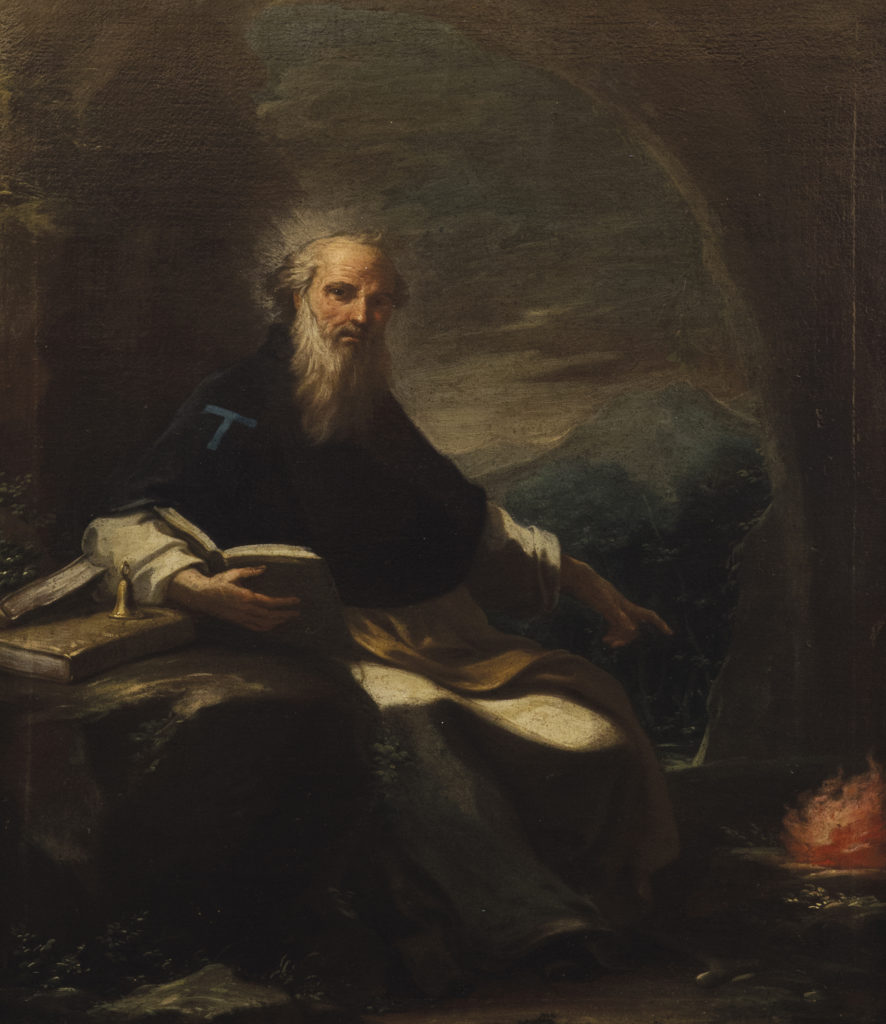 Yes, the Monastic Life was to be and give all this to the Christian world, for the example of St. Antony had given her a bias to usefulness. If there ever were a Monk to whom the charms of solitude and the sweetness of contemplation were dear, it was our Saint; and yet, they could not keep him in his desert, when he could save souls by a few days spent in a noisy city. Thus, we find him in the streets of Alexandria, when the pagan persecution was at its height; he came to encourage the Christians in their martyrdom. Later on, when that still fiercer foe of Arianism was seducing the Faith of the people, we again meet the great Abbot in the same capital, this time, preaching to its inhabitants, that the Word is consubstantial to the Father, proclaiming the Nicene faith, and keeping up the Catholics in orthodoxy and resolution. There is another incident in the life of St. Antony, which tells in the same direction, inasmuch as it shows how an intense interest in the Church must ever be where the Monastic Spirit is. We are alluding to our Saint’s affection for the great St. Athanasius, who, on his part, reverenced the Patriarch of the Desert, visited him, promoted the Monastic Life to the utmost of his power, used to say that he considered the great hope of the Church to be in the good discipline of Monasticism, and wrote the Life of his dear St. Antony. 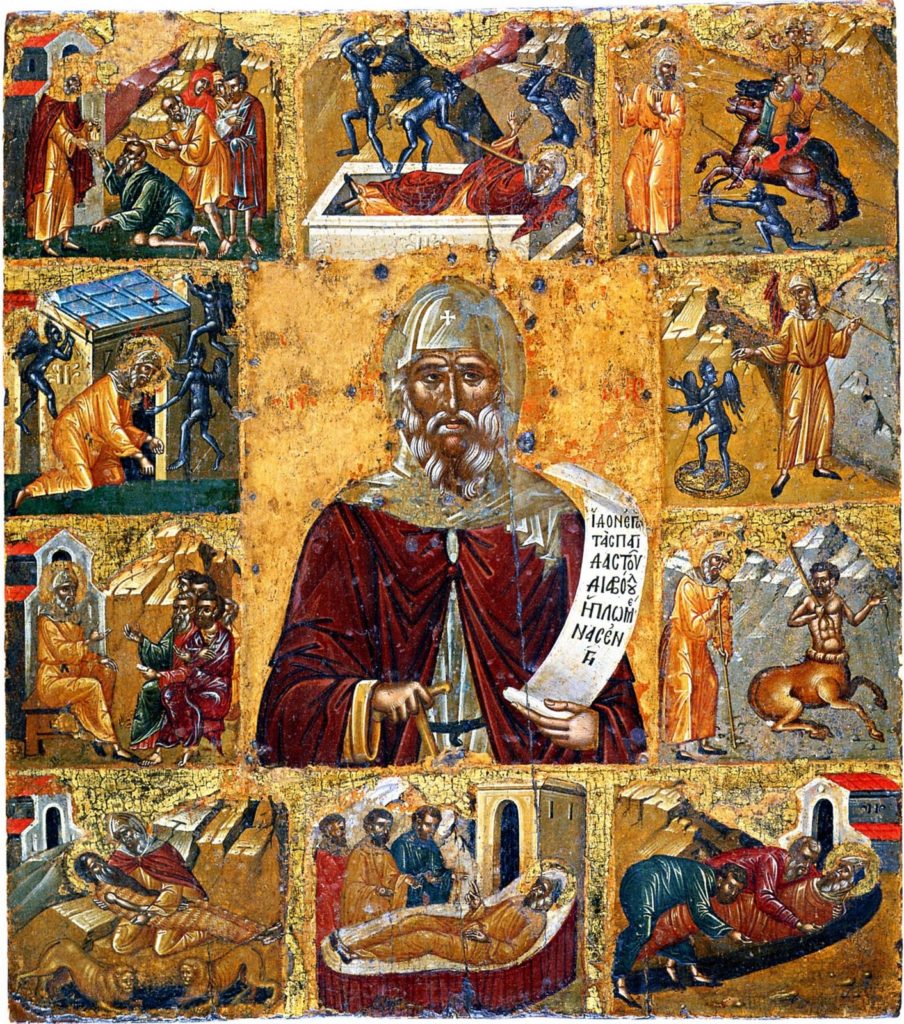 But, to whom is due the glory of the Monastic Institute, with which the destinies of the Church were, from that time forward, to be so closely connected, as that the period of her glory and power was to be when the monastic element flourished, and the days of her affliction were to be those of its decay? Who was it that put into the heart of Antony and his disciples the love of that poor and unknown, yet ever productive, life? It is Jesus, the humble Babe of Bethlehem. To him, then, wrapt in his swaddling-clothes, and yet the omnipotent God, be all the glory! It is time to hear the account of some of the virtues and actions of the great St. Antony, given by the Church in her Office of his Feast.

The Churches of the West, during the Middle-Ages, have left us several Sequences in honour of St. Antony. They are to be found in the ancient Missals. As they are not, by any means, remarkable as liturgical pieces, we shall content ourselves with inserting only one, omitting the three which begin: Alone Confessor; — In hac die lætabunda; — Antonius humilis. 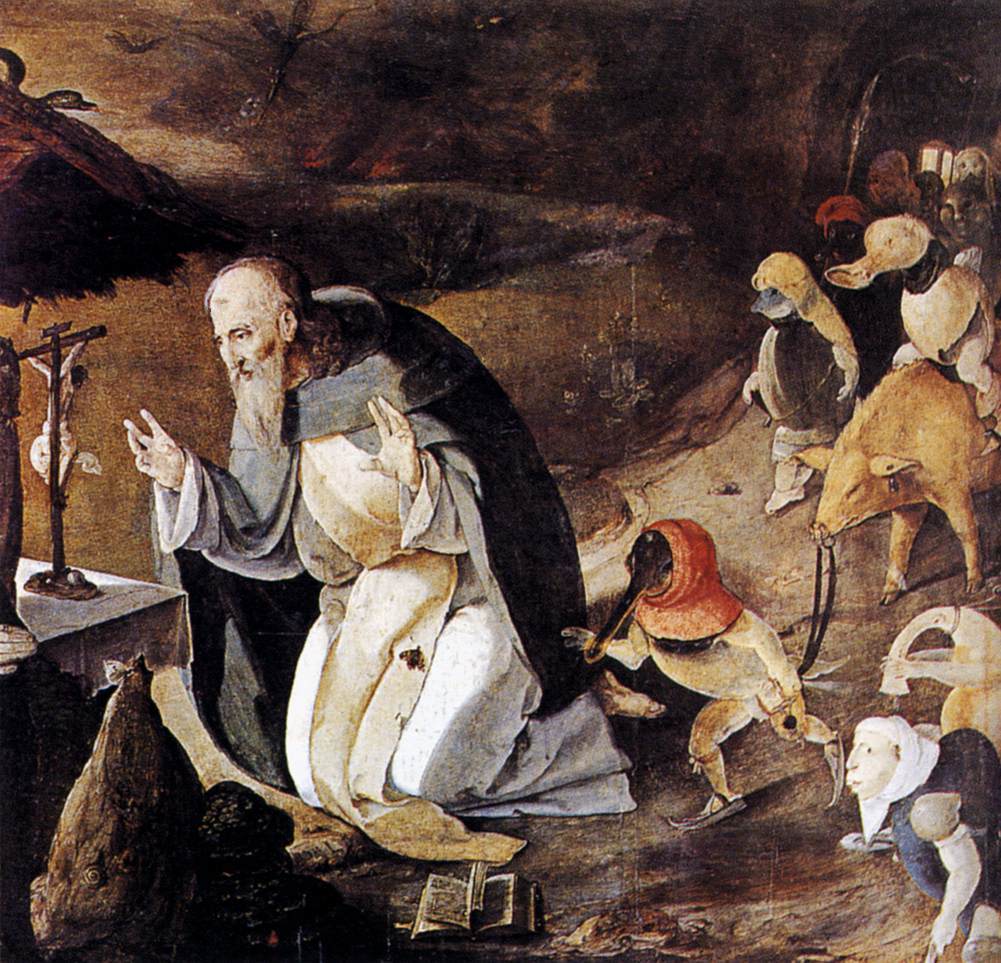 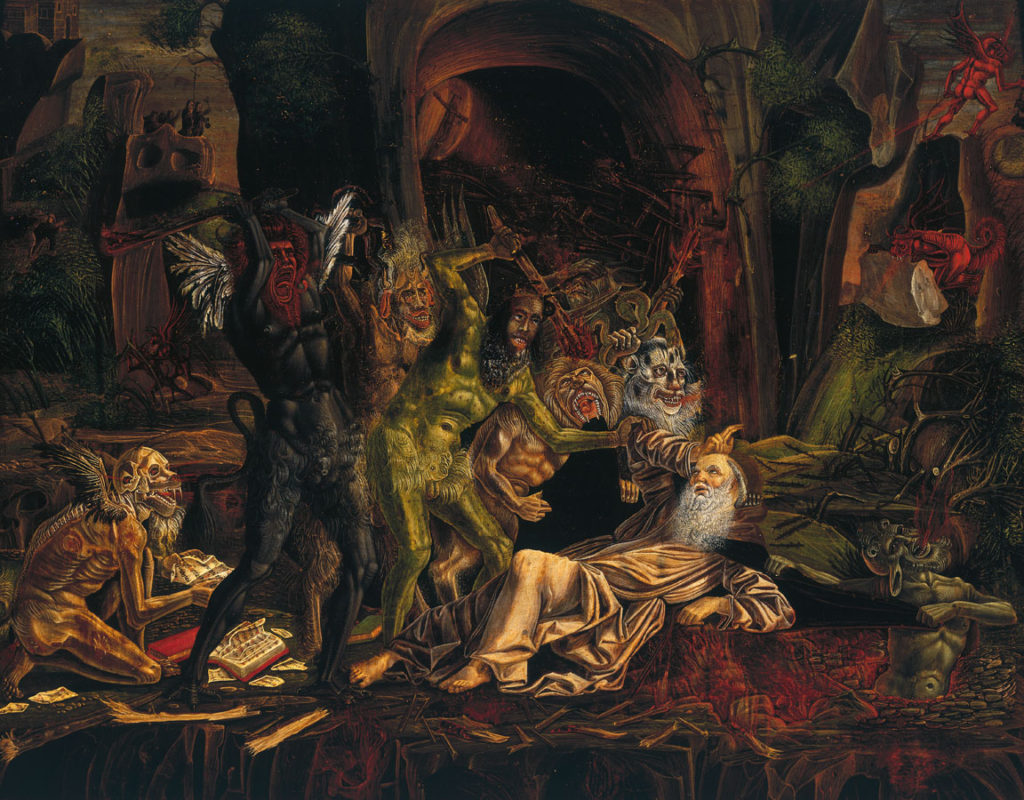 The Greek Church is enthusiastic in her praises of St. Antony. We extract the following stanzas from her Menæa.

We unite, great Saint! with the Universal Church, in offering thee the homage of our affectionate veneration, and in praising our Emmanuel for the gifts he bestowed upon thee. How sublime a life was thine, and how rich in fruit were thy works ! Verily, thou art the Father of a great people, and one of the most powerful auxiliaries of the Church of God. We beseech thee, therefore, pray for the Monastic Order, that it may re-appear in all its ancient fervour; and pray for each member of the great Family. Fevers of the body have been often allayed by thy intercession, and we beg for a continuance of this thy compassionate aid — but the fevers of our soul are more dangerous, and we beg thy pity and prayers that we may be delivered from them. Watch over us, in the temptations, which the enemy is unceasingly putting in our way; pray for us, that we may be vigilant in the combat, prudent in avoiding dangerous occasions, courageous in the trial, and humble in our victory. The angel of darkness appeared to thee in a visible shape; but he hides himself, and his plots from us; here again, we beg thy prayers, that we be not deceived by his craft. May the fear of God’s judgments, and the thought of eternity, penetrate into the depth of our souls. May Prayer be our refuge in every necessity, and Penance our safe-guard against sin. But above all, pray that we may have that, which thou didst counsel above all — the Love of Jesus — of that Jesus, who, for love of us, deigned to be born into this world, that so he might merit for us the graces wherewith we might triumph — of that Jesus, who humbled himself even so far as to suffer temptation, that so he might show as how we were to resist and fight. 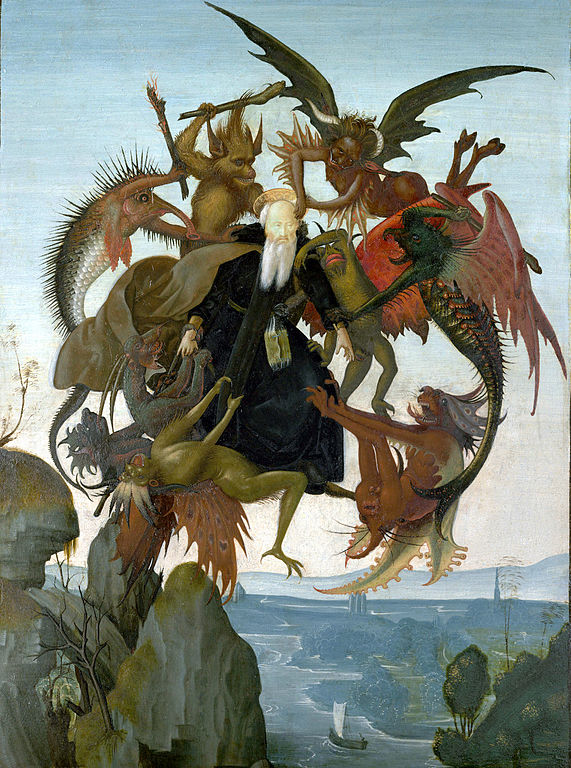