July 1- The Octave Day of St John the Baptist

The Church unites on June the 24th in one same glad celebration, the memory both of the Birth of the Precursor and of his Circumcision, surrounded as it was by prodigies, related in the Gospel of the feast itself. But, properly speaking, this is the day whereon these wonders were operated, according to the words of the Gospel: “It came to pass that on the Eighth Day the child was circumcised.” By placing on the morrow of this Eighth Day the celebration of Mary’s visit to her cousin Elizabeth, the Church seems to insinuate, besides, that Our Lady, who had been staying in Zachary’s house during the last three months, prolonged her stay and her tender care of the infant and his mother up to this date. The babe that three months ago, at her first arrival, had leaped as though fain to force the prison of the maternal womb, seemed at the moment of his birth to spring towards her; she received him into her arms, and pressed him to her breast wherein the Son of God still lay reposing. She gave herself entirely to him during these eight days; for she knew they would be the only ones in which the Friend of the Bridegroom would taste here below, although without seeing him, the intimate presence of him unto whom his whole heart turned. Save the solemn moment of his Baptism, the sublime majesty of which would hold in subjection every sentiment in the soul of the Precursor but that of self-annihilation and of adoration, John is never to behold (excepting once or twice at a distance) the Well-Beloved he has come to announce. Profound mystery this of plan divine! John is never to know the Bridegroom, never to enjoy our Jesus, save in Mary.

Nevertheless, even tomorrow must the farewell be; even tomorrow the desert is to open before him; a desert of the soul, more terrific a thousand times than that which affects the outward senses. His flight from the world to the desert of Judea, far from being a trial to John, will be rather a solace to this infant soul for whom earth was already too narrow. In the wilderness, at least, the air is pure, heaven seems ready to open, and God gives answer to the soul that calls upon him. Let us then not be astonished that scarcely is John born than he searches for solitude, and passes almost at once from his mother’s breast to the desert wilds. There was no childhood for the man who three months previous to his birth had attained, at one bound, to the plenitude of the age of Christ; no need of human master had he whom heaven had undertaken to instruct, who knew both the past and the future, in God (lines 216-217 of Poema vi.), and whose own plenitude of knowledge, transmitted by him to his parents, had turned them also into prophets. Better far than Elizabeth had he entered into the meaning of Our Lady in her Magnificat; even on this day he quite comprehends Zachary hailing him as Prophet of the Highest, in the Benedictus: and from whom, save from the Word Himself, could the Voice of the Word have received the science of language? Gifted with the full use of his will, what progress, on the other side, must he not have made, in love, during these three months! The Mother of divine grace neglected nothing in the formation of this natural disposition so singularly favored, where no obstacle opposed the full development of the divine germs. St. Ambrose, whose exquisite delicacy had so wonderfully penetrated into these mysteries, shows us John under Mary’s influence, exercising himself in the several virtues, annointing his limbs like a valiant athlete, and essaying, even from his mother’s womb, the combats which await him. The eight days which have just elapsed for him in the arms of Our Lady have completed the work. His sweet Mistress, whom he is to see no more, may even now bespeak their meeting again, in heaven, he at the left of her Son’s throne, she at the right, according to the tradition of which Christian Art has made itself the faithful interpreter up to our own time.

While awaiting for another six months the birth of the Virgin’s Son, earth is meanwhile in possession of him who is the greatest amongst all that are born of women. No human ken in its highest soarings may touch the summits whereon this child of but eight days holds fixed the gaze of his intelligence; no sanctity may stretch to further limits than his, the heroism of love. Fully enlightened on all the bearings of the approaching farewell, he will not shrink at seeing the Son and the Mother depart on the morrow. Like the divine Spouse himself, he, the Friend of the Bridegroom, is strong enough to have no other food than the accomplishment of the Will of the Father who has sent them both. His soul, filled henceforth with the memory of these days wherein his heart has been throbbing to the pulsations of that of Jesus, while Mary has been clasping him to her breast, will, by its fidelity, despite the distant parting, ever keep up between his own and these two Hearts the sublime concert wherein, during these happy hours, the Eternal Trinity has been listening for the first time to an echo, in the flesh, of Its own harmony. Like to the sunflower, friend of the day-star, which, without quitting earth whereon it is placed, keeps ever turning towards him its wistful corolla, John, from the desert’s midst, will follow in heart and thought every step of Jesus; but yet will he keep restraint upon his soul. With that eagle-glance of his which heretofore espied him in Our Lady’s womb, he will behold him despite all intermediaries, now a child, now grown up to manhood, passing by not far from his solitude; yet never once will the impetuosity of his love carry him away to climb the few hills then separating him from Jesus, and to throw himself at his sacred Feet; never once will the zeal which devours him, the Voice, the Witness of the Word, urge him to anticipate by one moment the hour that Heaven has fixed for him to cry out to the ignorant crowd: “Behold your God, the Lamb that is to save you, the expected Messias!” And when at last, in the fifteenth year of Tiberius Cæsar, he manifests the Bridegroom at the divine command, he, the great Baptist, is not the one to come nigh to Jesus saying: Master, where dwellest thou? nor is he the one that receives the answer: Come and see! To others, yea, even to all others, the happy lot to follow Jesus, to abide with Jesus: but as to John, he thrills indeed at his blissful meeting; yet for his part, he keeps afar off, he disappears even until that day, now fast approaching, when the prison of the adulterous Herod is to become his grave.

“O God!” cries out the gentle St. Francis de Sales, “such an example as this overwhelms my mind with its grandeur.” “Oh! what divine abstinence,” exclaims the Eagle of Meaux, in his turn, “Oh! abstinence more admirable far than all those other abstinences related of St. John the Baptist!” Let us, too, share with the Church in her admiring gladsomeness, while during these days she makes echo to Gabriel’s vioce proclaiming at once the dignity both of the Son of Zachary and of our Savior himself. Let us enter into the enthusiasm wherewith so many fathers and doctors (hailing first of all Mary blessed above all) are loud in their applause of the eulogium given to John by the Word Himself. Let us understand them, when they declare that amongst all men, Christ alone is more exalted than he; that whosoever else is born of woman is inferior to him; that he is the most excellent of all saints; yea, more than saint is he, a demi-god (line 252 of Poema vi.), marking the limit of human merit; so great, in fine, that a greater must necessarily be God (Augustine, Sermo CCLXXXVII). Contemplating a perfection so sublime which surpasses the ken of human intelligence, we cannot be surprised to learn that, according to the doctrine laid down in the works of Gerson, whose authority here is of such great weight, John the Baptist is exalted in heaven above all the choirs of the celestial hosts, and holds the place left vacant by Lucifer at the foot of the throne of God.

Having during this Octave been following with holy Church the teachings which it inspires, we shall conclude this day with the words of Saint Ambrose which compose the last lesson of the Matins Office now in use: “John is his name, writes Zachary, and forthwith his tongue is unloosed. Let us also write these mysteries spiritually, and we shall know how to speak. Let us engrave the Precursor of Christ, not on inanimate tablets, but on our living hearts. For to name John is to announce Christ. Let, then, these two names, John and Jesus Christ, be united upon our lips; and therefrom perfect praise will arise; like to that which issued from the mouth of that priest whose hesitating faith concerning the Precursor had rendered him dumb!” 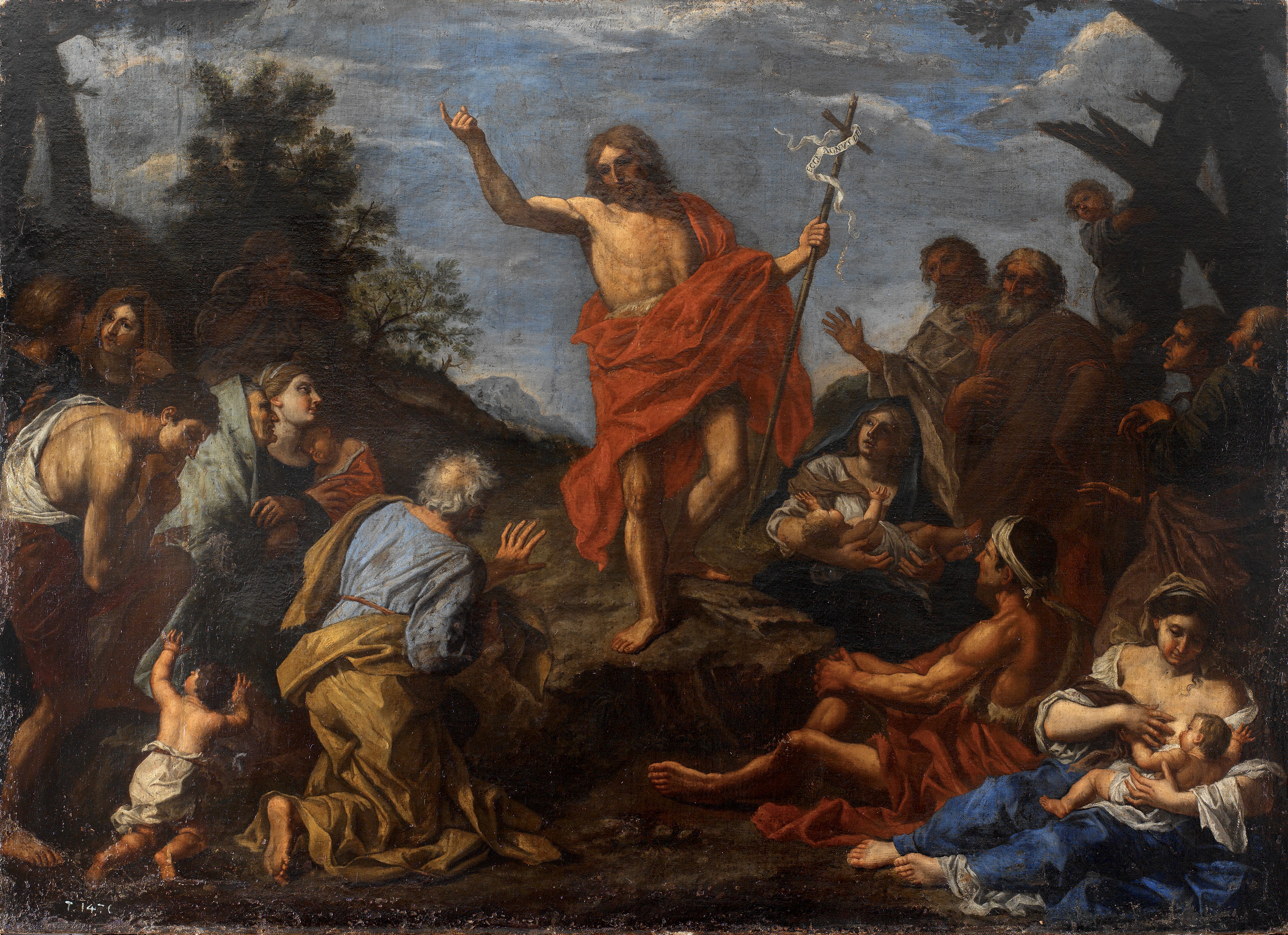 Let us now hear the conclusion of St. Ephrem’s song in which he gives the meeting of the Bridegroom and the Friend of the Bridegroom on the banks of the Jordan. John continues to expose the endless difficulties wherewith his humility inspires him, in order to decline the honor of baptizing the Word made Flesh.