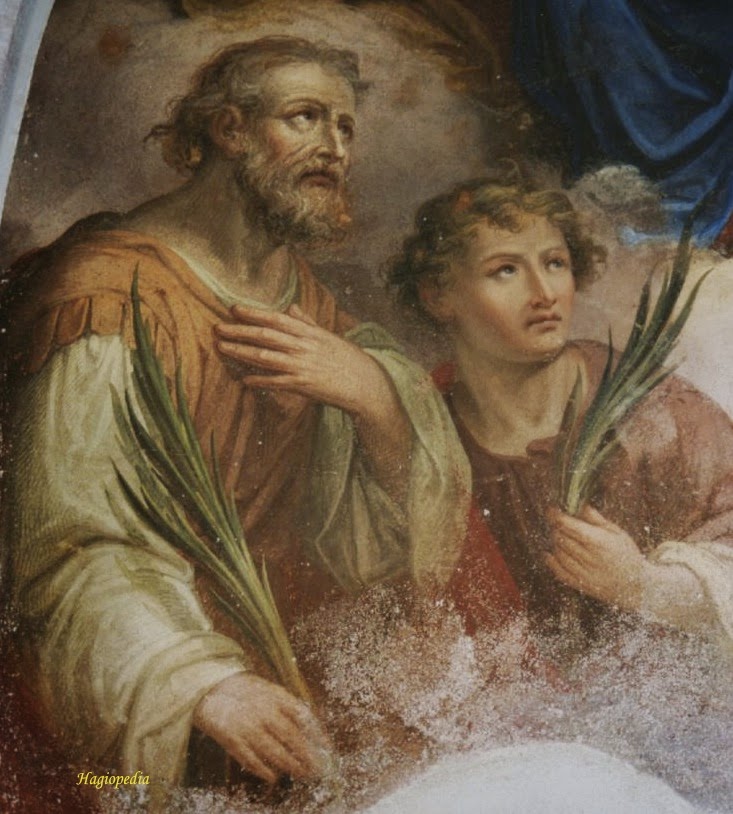 Nazarius and Celsus bring glory to the Church of Milan, by appearing on the cycle today. After lying forgotten for three centuries in the obscure tomb that had received their precious remains in the time of Nero, they now receive the united homage of East and West. It was nine years since the triumphal day when Gervase and Protase, no less forgotten by the city once witness of their combat, had come to console and strengthen an illustrious Bishop who was persecuted for his profession of the Divine consubstantiality of the same Christ who had had all their love and faith. Ambrose, loved by the martyrs, though denied their palm, was soon to receive the white wreath of confession in reward for his holy works, when heaven revealed to him a new treasure, the discovery of which was again “to illustrate the times of his episcopate.” Theodosius was no more; Ambrose was about to die; the barbarians were at the gates. But as if, simultaneous with the threat of imminent destruction of the ancient world, the hour for the first resurrection spoken of by St. John had sounded, the martyrs rose from their tombs to reign a thousand years with Christ on the renovated earth.

That great nation Babylon is fallen, is fallen, which made all nations to drink of the wine of the wrath for her fornication; and in her was found the blood of prophets and of saints, and of all that were slain upon the earth. The great Pope Innocent I, whose memory seems to have been purposely united with that of the martyrs, bears witness to the deluge, wherein, during his Pontificate, pagan Rome at length perished utterly, and made way for the new Jerusalem come down from heaven. Like the ancient Sion, the Rome of the Cæsars would not yield to the offers of that God, who alone could fulfil her desires of immortality. Even since the triumph of the Cross under Constantine, no city of the empire had remained so obstinately given to the worship of idols, or shed so much of that noble blood which might have renewed her youth. And yet after the defeat of her vain idols, God, in his patience, determined to wait a century longer, the last decade of which was a series of salutary threats and merciful interventions, the evident work of the Christ whom she still obstinately repulsed. The incursions of the Goths, allies one day, enemies the next, everywhere spreading anarchy, gave her an opportunity of returning to superstitions which the Christian Emperors had not tolerated; and in her dotage she welcomed the Tuscan soothsayers who had come to help her against Alaric, and allowed them to re-establish the worship of idols. Terrible was her awakening when, on the morning of August 24th, 410, the true God of armies took his revenge; and while the barbarians were engaged in wholesale massacre and pillage, lightning set fire to the town and destroyed the statues in which she had so long placed her confidence and her glory. 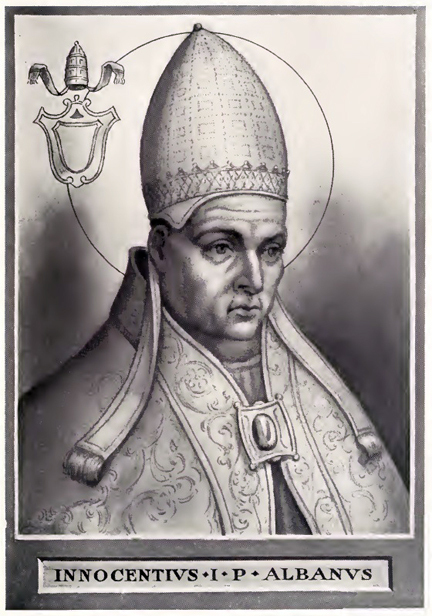 The avengers of God, destroying Babylon, spared the tombs of the two founders of the eternal Rome. On these Apostolic foundations Innocent began to rebuild the holy City. Soon on her seven hills, purified by fire, she rose again, more brilliant than ever, the destined center of the world of mind. It was in the year 417, the last of Innocent’s Pontificate, that St. Augustine, hearing that the Pelagian heresy was condemned, cried out: “Letters have arrived from Rome; the dispute is at an end.” The Councils of Carthage and Milevum, which on this occasion had requested the confirmation of their decree by the Apostolic See, did in this but continue the uninterrupted tradition of the Churches with regard to the supremacy of their Mother and Mistress. This fact is eloquently attested by the holy Pope Victor, who shares with the martyrs the honors of today. His great name calls to mind the Councils of the second century, held by his orders throughout the Church to treat of the celebration of Easter; the condemnation he pronounced, or intended to pronounce, against the Churches of Asia, without any one questioning his right to do so; lastly, the uncontroverted anathemas he hurled against Montanus and the precursors of Arius. 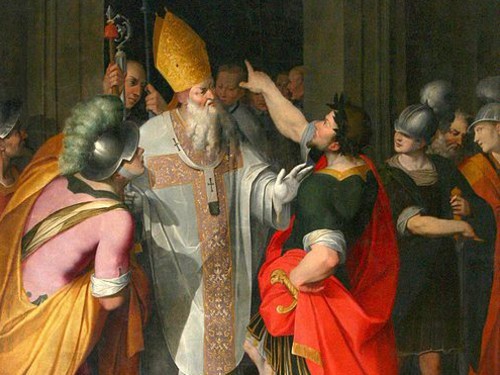 Let us read the notice of our four Saints given in today’s Office:

Glorious Saints, who, either by shedding your blood in the arena or by promulgating decrees from the Apostolic Chair, have exalted the faith of the Lord, bless our prayers. Give us to understand the teaching conveyed by your meeting today on the sacred cycle. We, who are neither martyrs nor pontiffs, may, nevertheless, merit to share in your glory; for the motive which explains your union today must be for us, each in his degree, the cause of salvation: the Apostle tells us that in Christ Jesus nothing availeth but faith that worketh by charity. It is only by that faith for which you labored or suffered that we we wait for the hope of justice, and expect the crown.

O Nazarius, who, leaving all things, didst carry the name of Christ to countries that knew him not; and thou Celsus, who, though a mere child, didst not fear to sacrifice, like him, for Jesus’ sake, thy family, thy country, and thy very life: obtain for us the right appreciation of the treasure of faith, which every Christian is called upon to show to advantage by the confession of good works and of praise. Victor, jealous guardian of that divine praise with regard to the Solemnity of solemnities, and avenger of the Man-God in his divine nature; Innocent, infallible teacher concerning the grace of Christ, and witness, too, of his inexorable justice, teach us to unite confidence with fear, uprightness of belief with the susceptibility a Christian ought to have with regard to his faith, the only foundation of justice and love. Martyrs and Pontiffs, may your united attraction draw us along the straight road which leads to heaven.