Etheldreda, or Audrey, whom the Church offers to our veneration today, was one of the most popular saints among our English forefathers. She was born in the middle of the seventh century, about A. D. 630, at Exning, near Newmarket, in Suffolk, and was the third daughter of Anna, the Christian king of East Anglia. In a meadow outside the village is still shown the brook in which, vassalage tradition tells us, the figure queen and saint was baptized by St Felix, first bishop of Dunwich. Much against her will, for she had vowed herself to the religious life, she was given in marriage to Tondbert, a prince of East Anglia, who bestowed upon her the Ile of Ely as a dowry. He respected her vow, and on his death a short time after, she was married to Ecgfrid, king of Northumbria, with whom she lived twelve years in such a manner as to keep all the while the glory of her virginal integrity, as St Bede, ‘the virgin-mother of many virgins consecrated to God, instructing them by the example of her heavenly life and by her holy admonitions.’ She died on June 23, A.D. 679, in the sixth year of her abbacy, ‘being taken to the Lord in the midst of her own people,’ and, as she had herself ordered, was buried among them in a wooden coffin. During her last illness she was afflicted with a violent pain in her jaw and neck, and was wont to say: ‘I most certainly know that I deservedly bear the weight of this illness on my neck, on which, I remember, when I was very young, I carried the superfluous weight of pearls and jewels. I believe the divine goodness would for the reason have me endure this pain in my neck, that I may be absolved from the guilt of my former vanity, sending me now, instead of gold and precious stones for my neck, this swelling and burning.’

Sixteen years after Etheldreda’s death her sister Sexburga, who had succeeded her as abbess, removed her incorrupt body and placed it in a white marble coffin a relic of ancient Roman art found near the walls of Grantchester (Cambridge). During the ages that followed Etheldreda’s shrine became one of the most famous places of pilgrimage in England, and many were the miracles wrought through the intercession of the virgin-queen. After various translations the white marble tomb containing the saint’s relics was placed in the new presbytery of the Cathedral built in A.D. 1257, and there it remained for two centuries until the overthrow of religion when it was demolished and the relics dispersed. The incorrupt hand of St Etheldreda escaped destruction and is in the possession of the Catholics.

The Roman Breviary gives us the following lessons of the life of the saint.

Etheldreda, daughter of Anna, king of the East Angles, was given in marriage, first, to the prince of the Gervii in the south, and after his death to Ecgfrid, king of the Northumbrians. After she had lived with him for twelve years she still remained a virgin. She obtained from the king by constant entreaty permission to leave the cares of the world and to serve Christ the King. She entered the monastery of Ebba, paternal aunt to the said King Ecgfird, where she took the veil of a nun. After a year she was made abbess of Ely, where she was a mother to the virgins vowed to God by her example and her admonitions not less than by her unfailing love.

She wore only woolen garments and abstained from hot baths, and seldom ate more than once in the day. She suffered from a swelling in the jaw and a pain in the neck, and seven years after she had held the office of abbess, she gave up her soul to God on the twenty-third of June in the year six hundred and seventy-nine. Honorable mention is made of her in the Roman Martyrology. She was succeeded by her sister Sexburga. Sixteen years later her body was found incorrupt and was translated into the church where it became an object of pious veneration to the faithful.

Let us make our prayer to God for the intercession of this glorious virgin-queen in the words holy Church makes use of on this her feast day. ‘O God, who year by year dost gladden us by the festival of blessed Etheldreda thy virgin: mercifully grant that we who admire the splendid examples of her chastity may be helped by her merits.’ 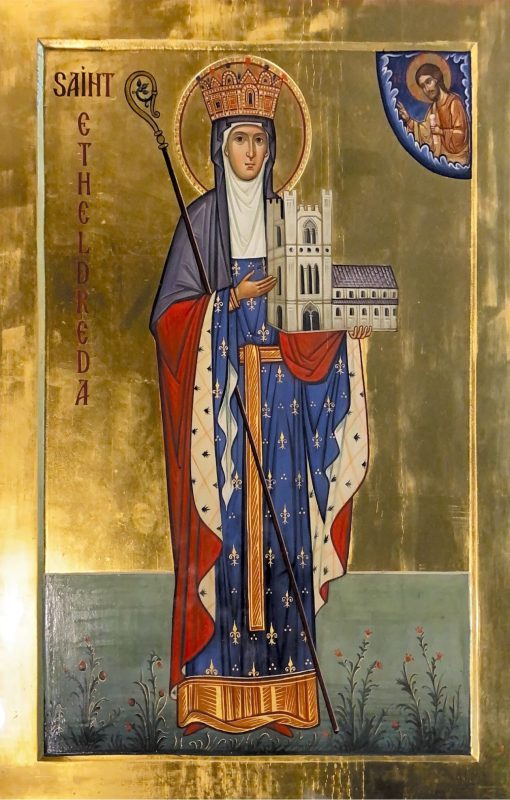