Thursday of the Fourth Week of Lent

The Station is at the Church of Saints Sylvester and Martin, which is one of the most venerable in Rome. It was originally built by Pope St. Sylvester, and still bears his name: but in the 6th century, it was consecrated to St. Martin of Tours. In the 7th century, it was enriched with the relics of Pope Saint Martin, which were brought from Chersonesus, where he died a Martyr, a few years before. This Church was the first Title of St. Charles Borromeo. It was also that of the learned liturgiologist, the Blessed Joseph-Mary Tommasi, whose body is now venerated in this Church, and has been miraculously preserved, even to this day, in a state of incorruption.

In this mysterious event are clustered together all the wonders of the plan laid down by God for the salvation of man. If the Catechumens were instructed in these sublime truths, it would be a disgrace in us to be ignorant of them; therefore, let us be attentive to the teachings of this Epistle. This dead child is the human race; sin has caused its death; but God has resolved to restore it to life. First of all, a servant is sent to the corpse; this servant is Moses. His mission is from God; but of itself, the Law he brings gives not life. This Law is figured by the staff which Giezi holds in his hand, and which he lays upon the child’s face; but to no purpose. The Law is severe; its rule is one of fear, on account of the hardness of Israel’s heart; yet is it with difficulty that it triumphs over his stubbornness; and they of Israel who would be just, must aspire to something more perfect and more filial than the Law of Sinai. The Mediator who is to bring down from heaven the sweet element of charity, is not yet come; he is promised, he is prefigured; but he is not made flesh, he has not yet dwelt among us. The dead child is not risen. The Son of God must himself come down.

Eliseus is the type of this divine Redeemer. See how he takes on himself the littleness of the child’s body, and bows himself down into closest contact with its members, and this in the silence of a closed chamber. It was thus that the Word of the Father, shrouding his brightness in the womb of a Virgin, united himself to our nature, and as the Apostle expresses it, emptied himself, taking the form of a servant, being made in the likeness of men , that they may have life, and may have it more abundantly than when it was given to them at the beginning. Take notice too of what happens to the child, and what are the signs of the resurrection wrought in him. He breathes seven times: the Holy Ghost, with his seven gifts, is to take possession of man’s soul and make it his temple. The child opens his eyes: the blindness of death is at an end. neither must we forget the Sunamitess, the mother of the child: she is the type of the Church, who is praying her divine Eliseus to give her the resurrection of her dear Catechumens, and of all unbelievers who are dwelling in the region of the shadow of death. Let us join our prayers with hers, and beg that the light of the Gospel may be spread more and more, and that the obstacles, made by Satan, and the malice of men to its propagation, may be forever removed.

The Church, both today and tomorrow, gives us types of the Resurrection; it is an announcement of the coming Pasch, and an encouraging sinners to hope that their spiritual death will soon be changed into life. Before entering on the two weeks, which are to be devoted to the commemoration of our Savior’s Passion, the Church shows her children the tender mercies of Him whose Blood is to purchase our reconciliation with Divine Justice. She would have us argue, for our own consolation, that, from such a Savior, we may well hope for pardon. Being thus rid of our fears, we shall be the more at liberty to contemplate the Sacrifice of our august Victim, and compassionate his Sufferings. Let us attentively consider the Gospel just read to us. A heart-broken mother is following to the grave the corpse of an only son. Jesus has compassion upon her; he stays the bearers; he puts his divine hand on the bier; he commands the young man to arise; and then, as the Evangelist adds, Jesus delivered him to his mother. The mother is the Church, who mourns over the death of so many of her children. Jesus is about to comfort her. He, by the ministry of his Priests, will stretch forth his hand over these dead children; he will pronounce over them the great word that gives resurrection; and the Church will receive back into her arms these children she had lost, and they will be full of life and gladness.

Let us consider the mystery of the three resurrections wrought by our Savior: that of the Ruler’s daughter, that of the young man of today’s Gospel, and that of Lazarus, at which we are to assist tomorrow. The daughter of Jairus (for such was the Ruler’s name) had been dead only a few hours: she represents the sinner who has but recently fallen, and has not yet contracted the habit of sin, nor grown insensible to the qualms of conscience. The young man of Naim is a figure of a sinner, who makes no effort to return to God, and whose will has lost its energy: he is being carried to the grave; and but for Jesus’ passing that way, he would soon have been of the number of them that are forever dead. Lazarus is an image of a worse class of sinners. He is already a prey to corruption. The stone that closes his grave, seals his doom. Can such a corpse as this ever come back to life? Yes, if Jesus mercifully deign to exercise his power. Now, it is during this holy Season of Lent that the Church is praying and fasting, and we with her, to the end that these three classes of sinners may hear the voice of the son of God, and hearing, rise and live. The mystery of Jesus’ Resurrection is to produce this wonderful effect in them all. Let us make our humble share in these merciful designs of God; let us, day and night, offer our supplications to our Redeemer, that in a few days hence, seeing how he has raised the dead to life, we may cry out with the people of Naim: A great Prophet is risen up among us, and God hath visited his people!

We offer to our readers this admirable canticle of the Gothic Church of Spain. It is addressed to the Catechumens, who are admitted to Baptism; but here and there, it is applicable to the Penitents, who are soon to be reconciled. 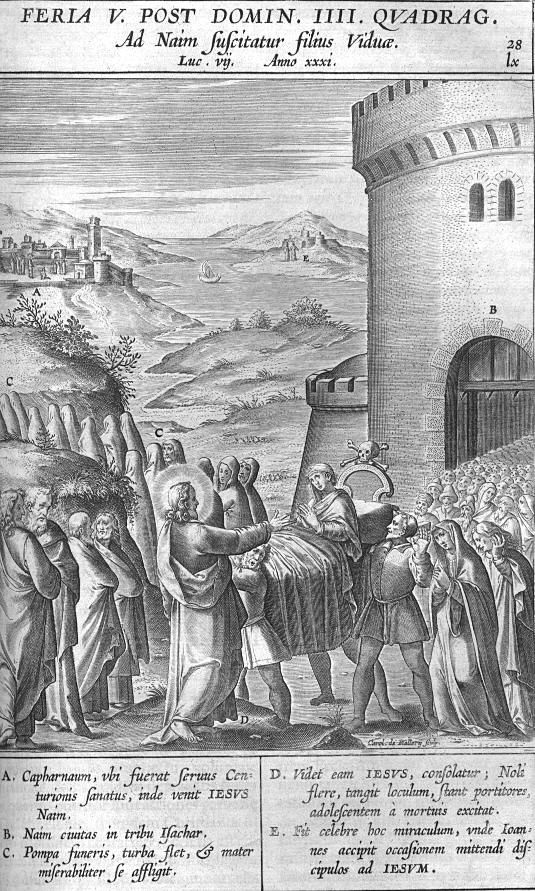