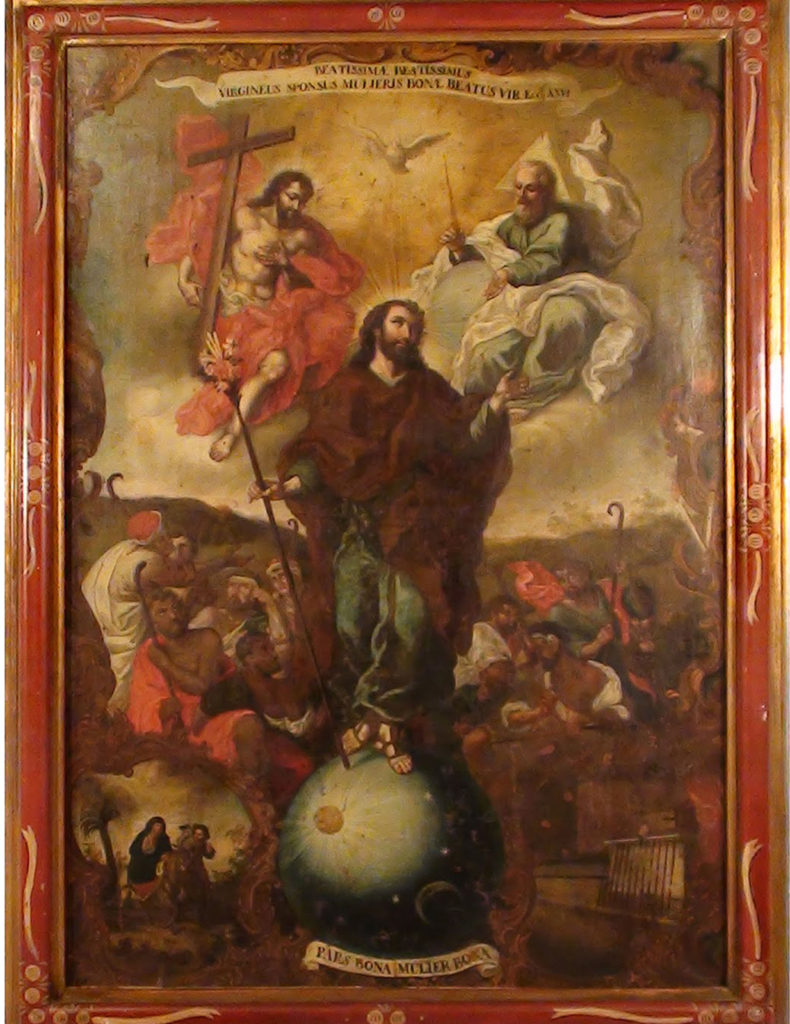 Yesterday, it was the bright Archangel that visited us; today, it is Joseph, the Spouse of Mary, the foster-father of the Son of God, that comes to cheer us by his dear presence. In a few days hence, the august mystery of the Incarnation will demand our fervent adorations: who, after the Angel of the Annunciation, could better prepare us for the grand Feast, than he that was both the confidant and faithful guardian of the divine secret?

The Son of God, when about to descend upon this earth to assume our human nature, would have a Mother; this Mother could not be other than the purest of Virgins, and her divine Maternity was not to impair her incomparable Virginity. Until such time as the Son of Mary were recognised as the Son of God, his Mother’s honour had need of a protector: some man, therefore, was to be called to the high honour of being Mary’s Spouse. This privileged mortal was Joseph, the chastest of men. 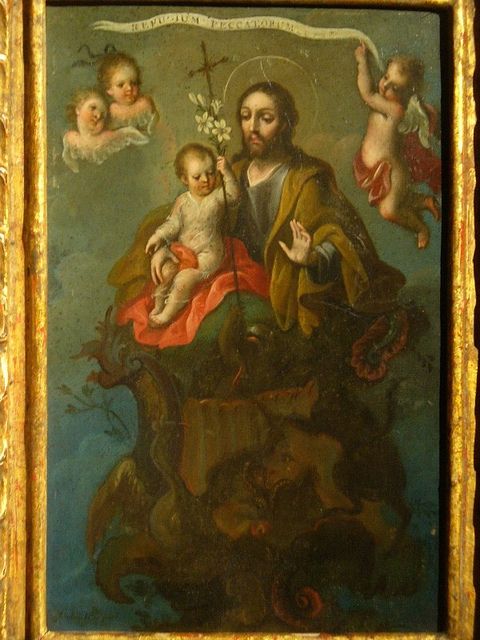 Heaven designated him as being the only one worthy of such a treasure: the rod he held in his hand, in the Temple, suddenly produced a flower, as though it were a literal fulfillment of the prophecy of Isaias: There shall come forth a rod from the root of Jesse, and a flower shall rise up out of his root. The rich pretenders to an alliance with Mary were set aside: and Joseph was espoused to the Virgin of the House of David, by a union which surpassed in love and purity everything the Angels themselves had ever witnessed.

But he was not only chosen to the glory of having to protect the Mother of the Incarnate Word; he was also called to exercise an adopted paternity over the very Son of God. So long as the mysterious cloud was over the Saint of Saints, men called Jesus the Son of Joseph, and the Carpenter’s Son. When our Blessed Lady found the Child Jesus in the Temple, in the midst of the Doctors, she thus addressed him: Thy father and I, sorrowing, have sought thee; and the holy Evangelist adds that Jesus was subject to them, that is, that he was subject to Joseph as he was to Mary. 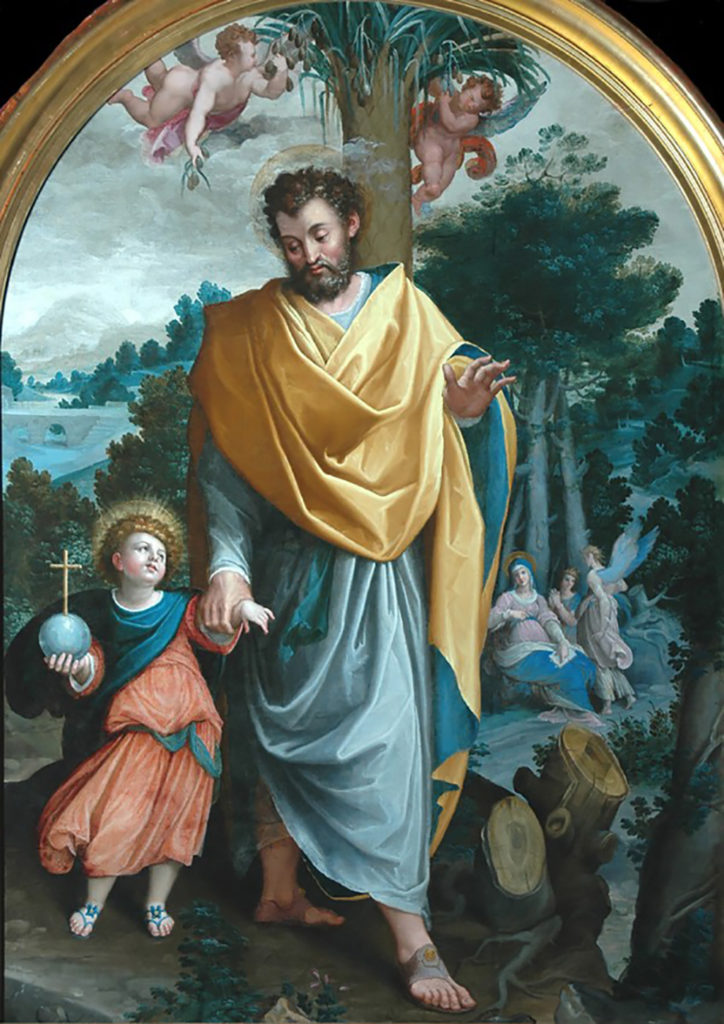 Who can imagine or worthily describe the sentiments which filled the heart of this man, whom the Gospel describes to us in one word, when it calls him the just man? Let us try to picture him to ourselves amidst the principal events of his life: his being chosen as the Spouse of Mary, the most holy and perfect of God’s creatures; the Angel’s appearing to him, and making him the one single human confidant of the mystery of the Incarnation, by telling him that the Virgin Spouse bore within her the fruit of the world’s salvation; the joys of Bethlehem, when he assisted at the Birth of the Divine Babe, honored the Virgin Mother, and heard the Angels singing; his seeing, first the humble and simple Shepherds, and then the rich Eastern Magi, coming to the stable to adore the new-born Child; the sudden fears which came on him, when he was told to arise, and, midnight as it was, to flee into Egypt with the Child and the Mother; the hardships of that exile, the poverty and the privations which were endured by the hidden God, whose foster-father he was, and by the Virgin Spouse, whose sublime dignity was now so evident to him; the return to Nazareth, and the humble and laborious life led in that village, where he so often witnessed the world’s Creator sharing in the work of a Carpenter; the happiness of such a life, in that cottage where his companions were the Queen of the Angels and the Eternal Son of God, both of whom honored and tenderly loved him as the head of the family—yes, Joseph was beloved and honored by the uncreated Word, the Wisdom of the Father, and by the Virgin, the masterpiece of God’s power and holiness.

We ask, what mortal can justly appreciate the glories of St. Joseph? To do so, he would have to understand the whole of that Mystery, of which God made him the necessary instrument. What wonder, then, if this Foster-Father of the Son of God was prefigured in the Old Testament, and that by one of the most glorious of the Patriarchs? Let us listen to St. Bernard, who thus compares the two Josephs: “The first was sold by his brethren, out of envy, and was led into Egypt, thus prefiguring our Savior’s being sold; the second Joseph, that he might avoid Herod’s envy, led Jesus into Egypt. The first was faithful to his master, and treated his wife with honor; the second, too, was the most chaste guardian of his Spouse, the Virgin Mother of his Lord. To the first was given the understanding and interpretation of dreams; to the second, the knowledge of, and participation in, the heavenly Mysteries. The first laid up stores of corn not for himself, but for all the people; the second received the Living Bread that came down from heaven, and kept It both for himself and for the whole world.”

Such a life could not close save by a death that was worthy of so great a Saint. The time came for Jesus to quit the obscurity of Nazareth, and show himself to the world. His own works were henceforth to bear testimony to his divine origin; the ministry of Joseph, therefore, was no longer needed. It was time for him to leave this world, and wait, in Abraham’s bosom, the arrival of that day, when heaven’s gates were to be opened to the just. As Joseph lay on his bed of death, there was watching by his side He that is the master of life, and that had often called this his humble creature, Father. His last breath was received by the glorious Virgin Mother, whom he had, by a just right, called his Spouse. It was thus, with Jesus and Mary by his side, caring and caressing him, that Joseph sweetly slept in peace. The Spouse of Mary, the foster-father of Jesus, now reigns in heaven with a glory which, though inferior to that of Mary, is marked with certain prerogatives which no other inhabitant of heaven can have. 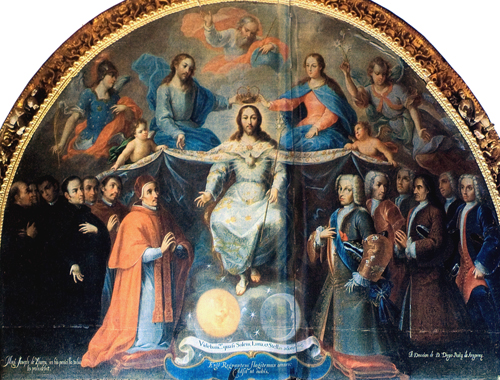 From heaven, he exercises a powerful protection over those that invoke him. In a few weeks from this time, the Church will show us the whole magnificence of this protection; we shall be having a special Feast in honour of the Patronage of St. Joseph. What the Liturgy proposes to us to-day, are his glories and privileges. Let us unite with the Faithful throughout the world, and offer the Spouse of Mary the Hymns, which are this day sung in his praise. 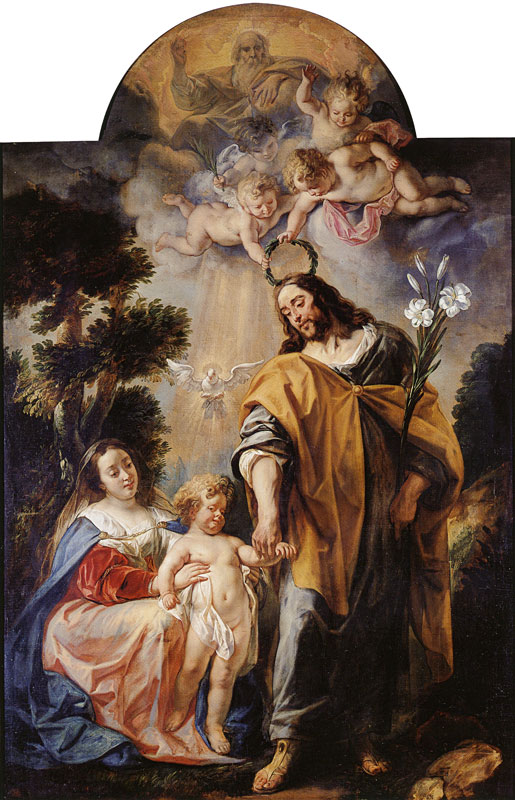 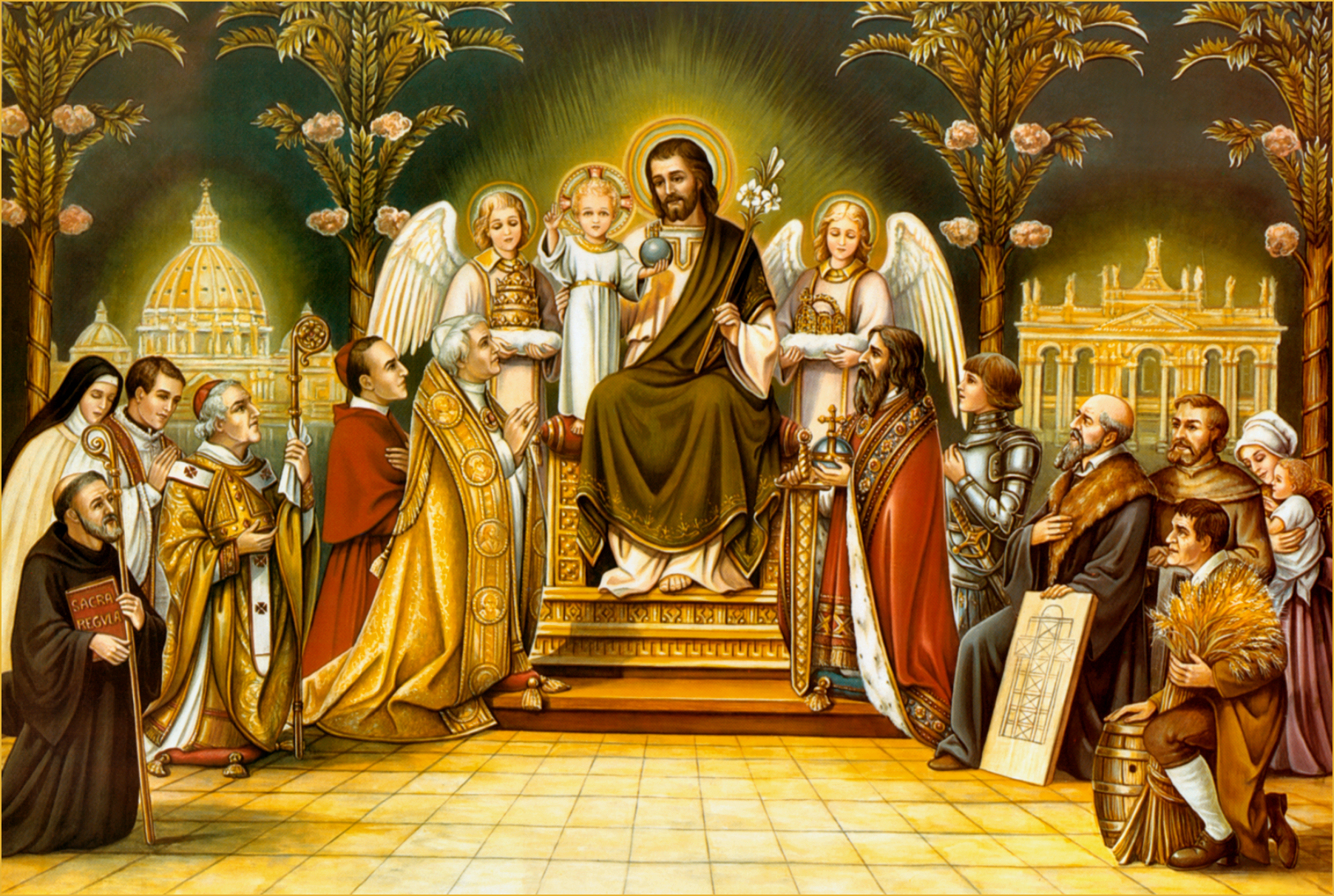 The Greek liturgy, which honors St. Joseph on the Sunday following the Feast of Christmas, thus hymns his praise in the Menæa. 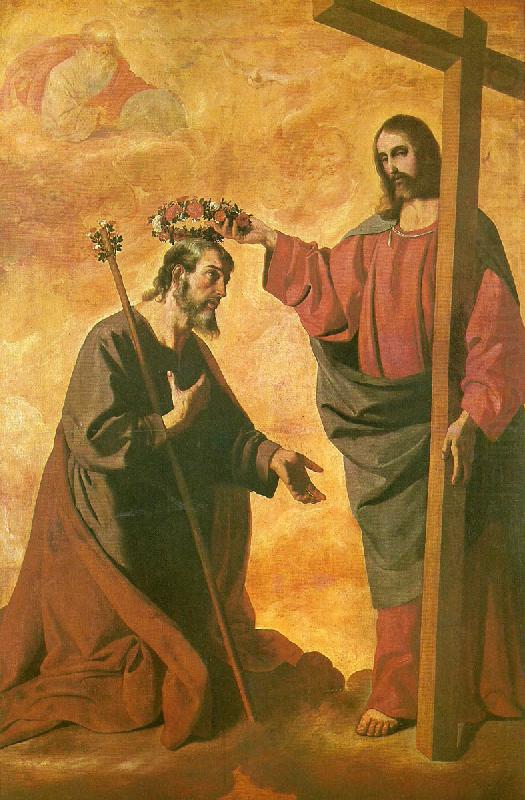 We praise the glorify thee, O happy Saint! We hail thee as the Spouse of the Queen of heaven, and Foster-Father of our Redeemer. These titles, which would seem too grand for any human being to enjoy, are thine; and they are but the expression of the dignities conferred on thee by God. The Church of heaven admires the sublime favors thou hast received; the Church on earth joyfully celebrates thy glories, and blesses thee for the favors thou art so unceasingly bestowing upon her.

Though born of the kingly race of David, thou wast the humblest of men; thy spirit led thee to seek obscurity, and a hidden life was thine ambition: but God chose thee to be an instrument in the sublimest of all his works. A noble Virgin of the same family of David—the object of heaven’s admiration and the glory and hope of the world—yes, this Virgin is to be thy Spouse. The Holy Ghost is to dwell within her as in a most pure tabernacle; it is to thee, the just and chaste, that he entrusts her as an inestimable treasure. Espouse, then, to thyself her whose beauty the very King of heaven so greatly desires.

The Son of God comes down to this earth, that He may live the life of man; He comes that he may sanctify the ties and affections of kindred. He calls thee Father; He obeys thy orders. What strange emotions must have filled thy heart, O Joseph! when, knowing the prerogatives of thy Spouse and the divinity of thy adopted Son, thou hadst to be the head of this Family, which united heaven and earth into one! What respectful and tender love for Mary, thy Blessed Spouse! What gratitude and profound worship of Jesus, who obeyed thee as thy Child! O mysteries of Nazareth! a God dwells among men, and permits Himself to be called the Son of Joseph!

O sublime minister of the greatest of blessings, intercede for us with God made Man. Ask him to bestow Humility upon us—that holy virtue which raised thee to such exalted dignity, and which must be the basis of our conversion. It was pride that led us into sin and made us prefer our own will to that of God: yet will he pardon us if we offer him the sacrifice of a contrite and humbled heart. Get us this virtue, without which there can be no true penance. Pray also for us, O Joseph, that we may be chaste. Without purity of mind and body, we cannot come nigh the God of all sanctity, who suffers nothing defiled to approach him. He wills to make our bodies, by his grace, the temples of his holy Spirit: do thou, great Saint, help us to maintain ourselves in so exalted a dignity, or to recover it, if we have lost it.

And lastly, O Faithful Spouse of Mary! recommend us to our Mother. If she cast a look of pity upon us during these days of reconciliation, we shall be saved: for she is the Queen of Mercy, and Jesus, her Son, will pardon us and change our hearts, if she intercede for us, O Joseph! Remind her of Bethlehem, Egypt, and Nazareth, in all of which she received from thee such marks of thy devotedness. Tell her, that we, also, love and honour thee; and Mary will reward us for our devotion to him that was given her by heaven as her protector and support.