May 10 – Sts Gordian and Epimachus, Martyrs 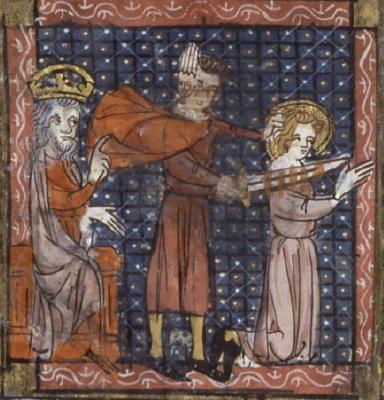 Two fresh Martyrs ascend from our earth on this day, and are admitted to share of Jesus’ glory. Again it is Rome that deputes them to bear her homage to the Conqueror of Death. Gordian was one of the magistrates, under Julian the Apostate, who were commissioned to persecute the Christians. One day, while exercising his office, he suddenly descended from the tribunal, and took his place among the criminals. He was soon called upon to shed his blood for the Faith. His martyrdom, together with that of the illustrious brothers, John and Paul, whose feast we shall keep in June, closes the period of the Pagan Persecutions in the West. The fact of his being buried in the Crypts on the Latin Way awakened the memory of another Martyr, whose Relics, half consumed by fire, had long before been brought thither from Alexandria. His name was Epimachus; and, on this day, the two Martyrs were united inseparably in the devotion of the Faithful. Neither the place nor the period of their combat was the same; but both of them fought for the one cause, and won the same victory. The two Conquerors are buried in Peace in the Eternal City; but He, for whose name they delivered their bodies to death, is mindful of their precious remains. Yet a little while, and he will fulfill, in their regard, the promise he made, when he said: I am the Resurrection and the Life. He that believeth in me, although he be dead, shall live.

Sleep your sleep of Peace, O holy Martyrs! Rest ye a little time, till your fellow-servants and brethren, who are to be slain, even as you, shall be filled up. The number has been added to in every century; but the world is now near its end, and its last period is to be rich in Martyrdom. When the reign of the Man of Sin begins its course, and the final tempest rages against the bark of holy Church, then, O Martyrs of Christ, protect the Christian people, in return for the yearly tribute of honor that it has paid to your venerable names. Pray also for us who are living during these sad times, whose miseries seem like the distant howling of the storm that is to precede the end of the world. Strengthen our hearts, O holy Martyrs! and whatever may be the lot prepared for us by Providence, obtain for us that we may be faithful to Him who would be to us what he has been to you,—the Resurrection and the Life.