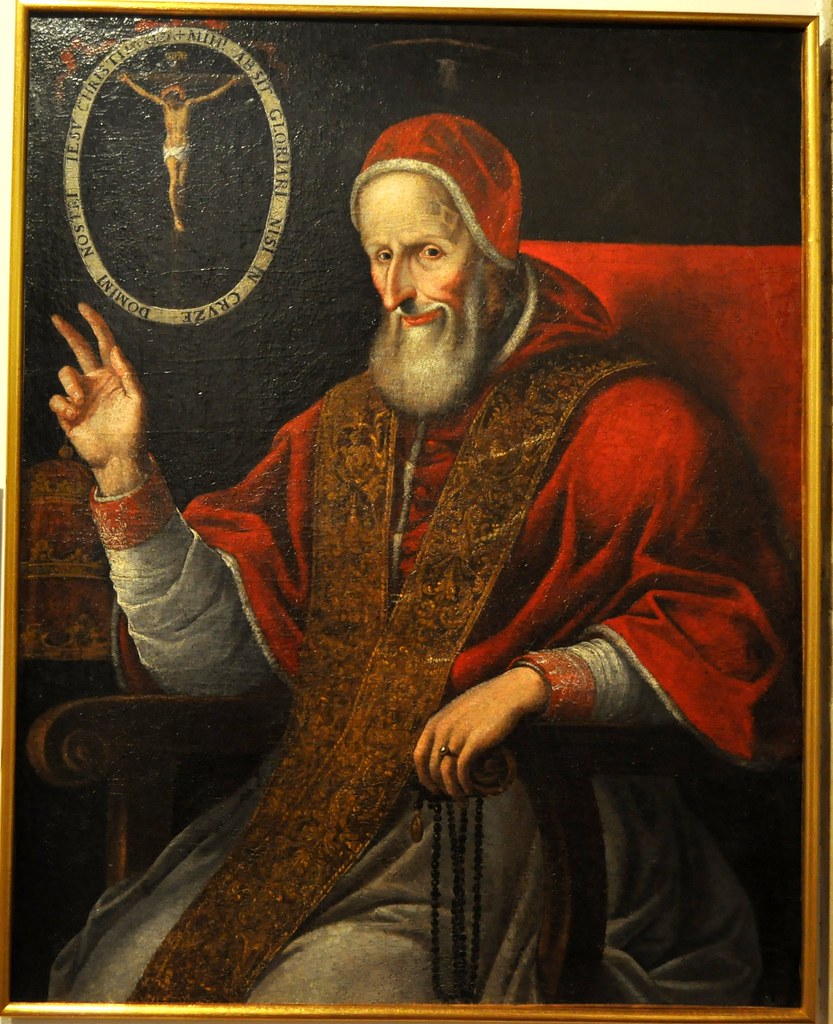 We have already met with the names of several Pontiffs on the Paschal Calendar. They form a brilliant constellation around our Risen Jesus, who, during the period between his Resurrection and Ascension, gave to Peter, their predecessor, the Keys of the kingdom of heaven. Anicetus, Soter, Cauis, Cletus and Marcellinus, held in their hands the palm of martyrdom: Leo was the only one that did not shed his blood in the cause of his Divine Master. Today, there comes before a holy Pope who governed the Church in these latter times; he is worthy to stand amidst the Easter group of Pontiffs. Like Leo, Pius the Fifth was zealous in combating heresy; like Leo, he saved his people from the Barbarian yoke.

The whole life of Pius the Fifth was a combat. His Pontificate fell during those trouble times when Protestantism was leading whole countries into apostasy. Italy was not a prey that could be taken by violence: artifice was therefore used, in order to undermine the Apostolic See, and thus envelope the whole Christian world in the darkness of heresy. Pius, with untiring devotedness, defended the Peninsula from the danger that threatened her. Even before he was raised to the Papal Throne, he frequently exposed his life by his zeal in opposing the preaching of false doctrines. Like Peter the Martyr, he braved every danger, and was the dread of the emissaries of heresy. Placed upon the Chair of Peter, he kept the innovators in check by fear, he roused the sovereigns of Italy to energy, and, by measures of moderate severity, he drove back beyond the Alps the torrent that would have swept Christianity from Europe, had not the Southern States thus opposed it. From that time forward, Protestantism has never made any further progress: it has been wearing itself out by intestine anarchy of doctrines. We repeat it: this heresy would have laid all Europe waste, had it not been for the vigilance of the Pastor who animated the defenders of Truth to resist it where it already existed, and who set himself as a wall of brass against its invasion in the country where he himself was the Master. 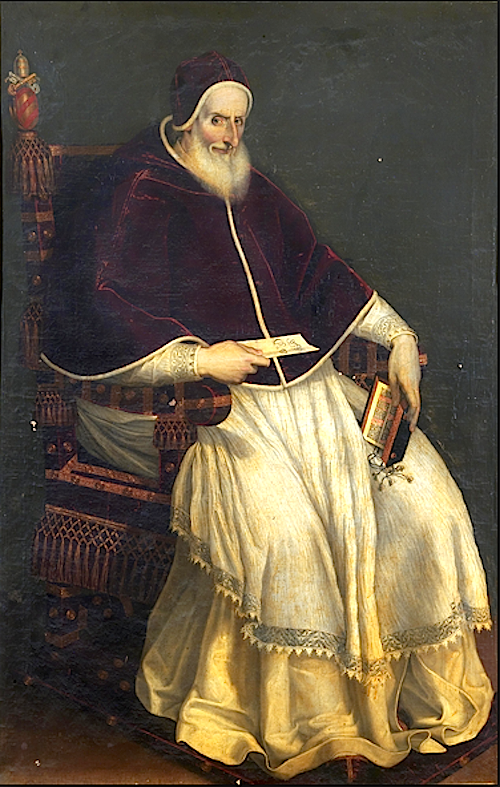 Another enemy taking advantage of the confusion caused in the West by Protestantism, organized an expedition against Europe. Italy was to be its first prey. The Ottoman fleet started from the Bosphorus. Here again, there would have been the ruin of Christendom, but for the energy of the Roman Pontiff, our Saint. He gave the alarm, and called the Christian Princes to arms. Germany and France, torn by domestic factions that had been caused by heresy, turned a deaf ear to the call. Spain alone, together with Venice and the little Papal fleet, answered the Pontiff’s summons. The Cross and Crescent were soon face to face in the Gulf of Lepanto. The prayers of Pius the Fifth decided the victory in favor of the Christians, whose forces were much inferior to those of the Turks. We shall have to return to this important even when we come to the Feast of the Rosary in October. But we cannot omit mentioning today the prediction uttered by the holy Pope on the evening of the great day of October 7th, 1571. The battle between the Christian and Turkish fleets lasted from six o’clock in the morning till late in the afternoon. Towards evening, the Pontiff suddenly looked up towards heaven, and gazed upon it in silence for a few seconds. Then turning to his attendants, he exclaimed, “Let us give thanks to God! The Christians have gained the victory!” The news soon arrived at Rome; and thus, Europe once more owed her salvation to a Pope! The defeat at Lepanto was a blow to the Ottoman Empire from which it has never recovered: its fall dates from that glorious day.

The zeal of this holy Pope for the reformation of Christian morals, his establishing the observance of the laws of discipline prescribed by the Council of Trent, and his publishing the new Breviary and Missal—have made his six years’ Pontificate to be one of the richest periods of the Church’s history. Protestants themselves have frequently expressed their admiration of this vigorous opponent of the so-called Reformation. “I am surprised,” said Bacon, “that the Church of Rome has not yet canonized this man.” Pius the Fifth did not receive this honor till about a hundred and thirty years after his death—so impartial is the Church, when she had to adjudicate this highest of earthly honors even to her most revered Pastors!

Of the many miracles which attested the merits of this holy Pontiff, even during his life, we select the two following. As he was one day crossing the Vatican piazza, which is on the site of the ancient Circus of Nero, he was overcome with a sentiment of enthusiasm for the glory and courage of the Martyrs, who had suffered on that very spot, in the first Persecution. Stooping down, he took up a handful of dust from the hallowed ground, which had been trodden by so many generations of the Christian people since the peace of Constantine. He put the dust into a cloth, which the Ambassador of Poland, who was with him, held out to receive it. When the Ambassador opened the cloth, after returning to his house, he found it all saturated with blood, as fresh as though it had been that moment shed: the dust had disappeared. The faith of the Pontiff had evoked the blood of the Martyrs, which thus gave testimony, against the heretics, that the Roman Church, in the 16th Century, was identically the same as that for which those brave heroes and heroines laid down their lives in the days of Nero. 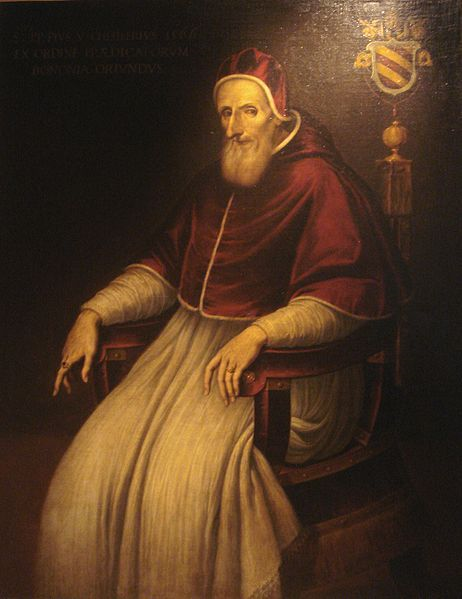 The heretics attempted, more than once, to destroy a life which baffled all their hopes of perverting the Faith of Italy. By a base and sacrilegious stratagem, aided as it was by an odious treachery, they put a deadly poison on the feet of the Crucifix, which the Saint kept in his Oratory, and which he was frequently seen to kiss with great devotion. In the fervor of prayer, Pious was about to give this mark of love to the image of his Crucified Master—when suddenly the feet of the Crucifix detached themselves from the Cross and eluded the proffered kiss of the venerable old man. The Pontiff at once saw through the plot, whereby his enemies would fain have turned the life-giving Tree into an instrument of death.

In order to encourage the Faithful to follow the sacred Liturgy, we will select another interesting example from the life of this great Saint. When lying on his bed of death, and just before breathing his last, he took a parting look at the Church on earth, which he was leaving for that of Heaven. He wished to address a final prayer for the Flock which he knew was surrounded by danger; he therefore recited, but with a voice that was scarcely audible, the following stanza of the Paschal Hymn: “We beseech thee, O Creator of all things! that, in these days of Paschal joy, thou defend thy people from every assault of death!” 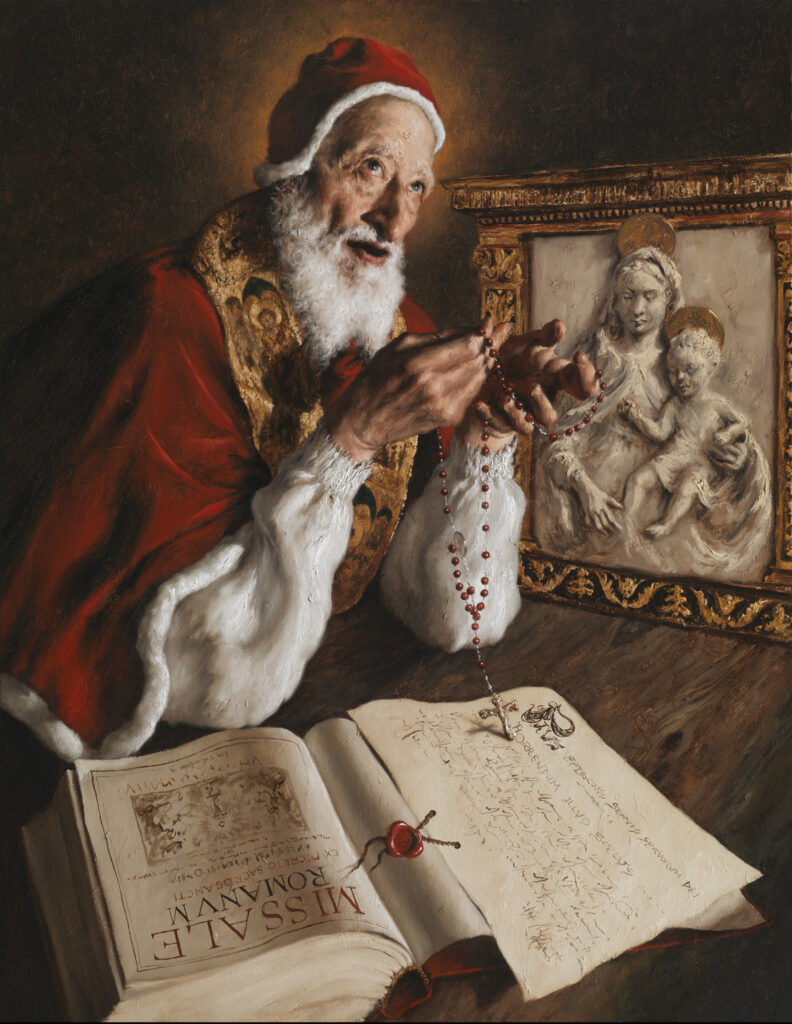 [The Stanza recited by the dying Pontiff was, in the Breviary of his time, as follows:

When the Hymns were corrected under the pontificate of Urban the Eighth, this stanza was totally changed: Ut sis perenne mentibus, &c. The Monastic Breviary has retained the original.] 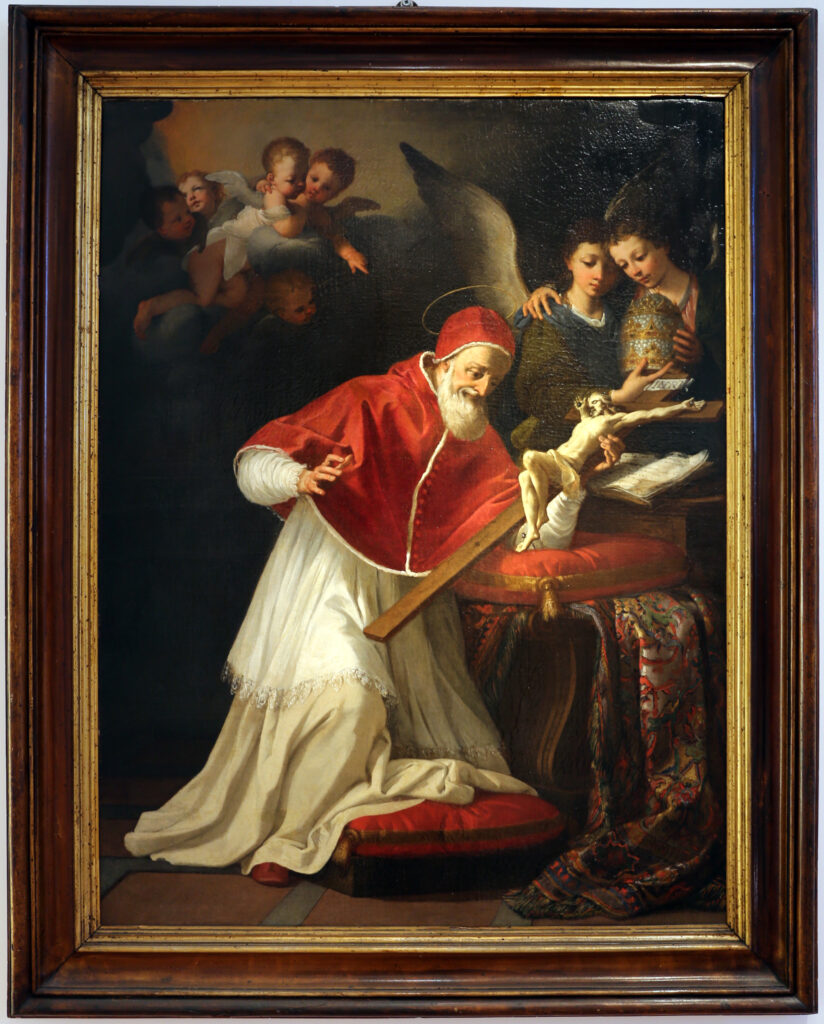 Let us now read the eulogy of this Saintly Pope of modern times, as given in the Divine Office. 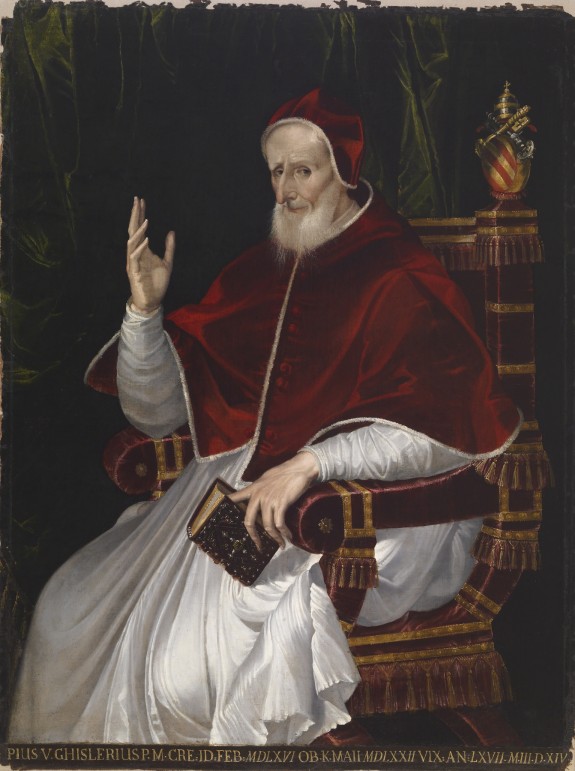 St. Pius is one of the leading glories of the Dominican Order. We find the following Responsories and Hymns in the Breviary of that Order. 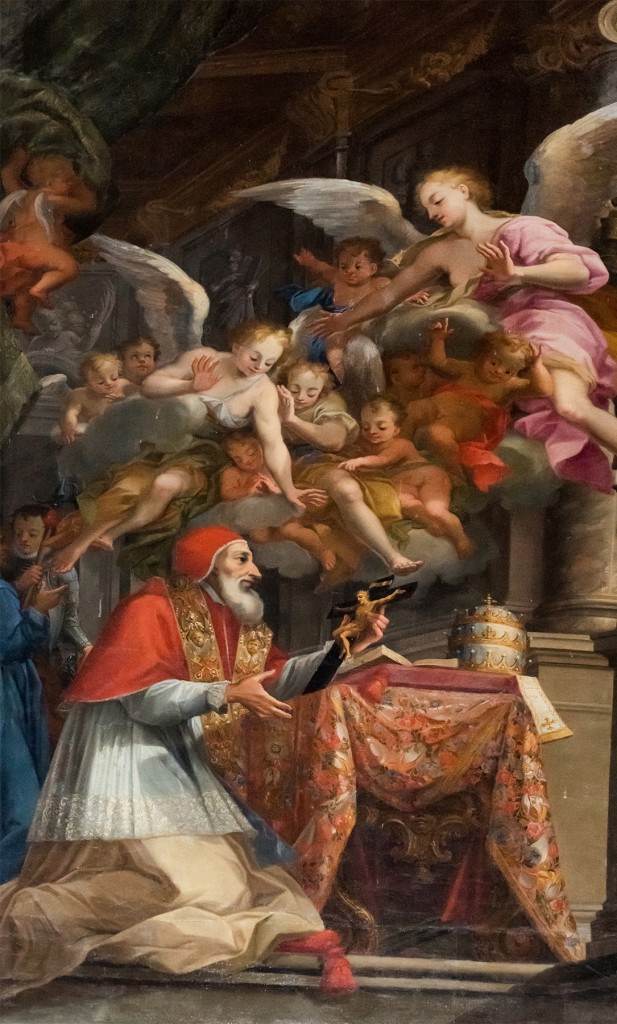 The following Hymn is placed near the tomb of our Saint, in the Church of Saint Mary Major, for the use of those who visit his Shrine. 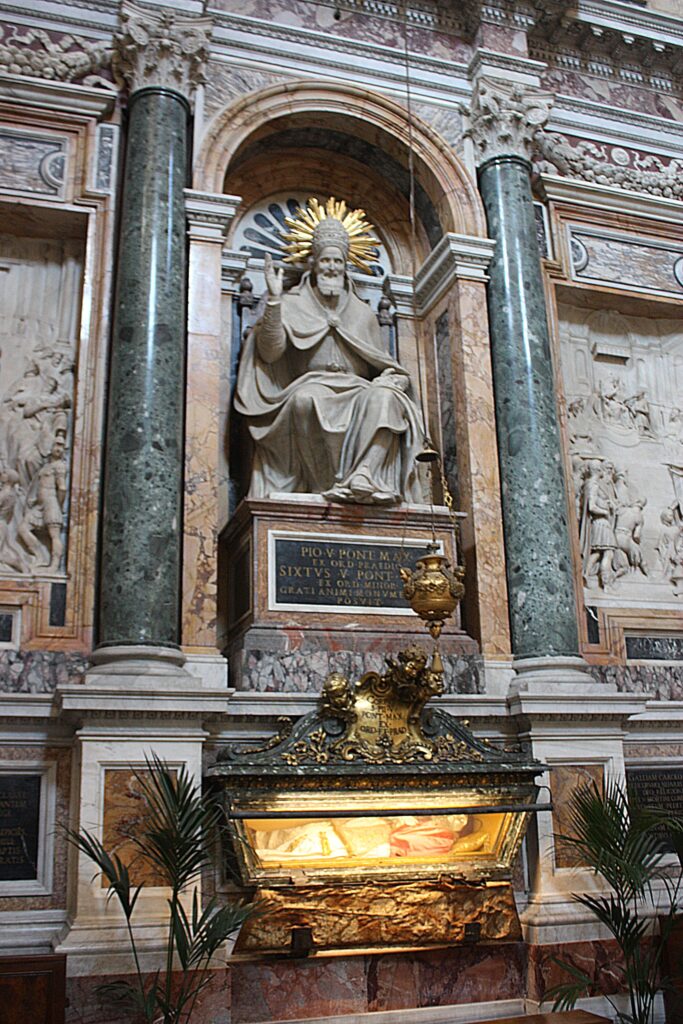 Pontiff of the living God! thou wast, while on earth, the pillar of iron and wall of brass spoken of by the Prophet. Thine unflinching firmness preserved the flock entrusted to thee from the violence and snares of its many enemies. Far from desponding at the sight of the dangers, thy courage redoubled, just as men raise the embankments higher when they see the torrent swell. By thee was the spread of Heresy checked; by thee was the Mussulman invasion repelled, and the haughty Crescent humbled. God honored thee by choosing thee as the avenger of his glory, and the deliver of the Christian people: receive our thanks, and the homage of our humble praise! By thee were repaired the injuries done to the Church during a period of unusual trial. The true reform—the reform that is wrought by authority—was vigorously applied by thy strong and holy land. To thee is due the restoration of the Divine Service, by the publication of the Books of holy Liturgy. And all these glorious deeds were done in the six short years of thy laborious Pontificate!

Hear, now, the prayers addressed to thee by the Church Militant, whose destinies were once in thy hands. When dying, thou didst beseech our Risen Jesus to grant her protection against the dangers which were then threatening her: oh! see the state to which licentious error has now reduced almost the whole Christian world! The Church has nothing left to her wherewith to make head against her countless enemies, save the promises of her Divine Founder; all visible support is withdrawn from her; she has been deprived of everything except the merit of suffering and the power of prayer. Unite, O holy Pontiff, thy prayers to hers, and show how unchanged is thy love of the Flock of Christ. Protect, in Rome, the Chair of thy Successor, attacked as it now is by open violence and astute hypocrisy. Princes and Peoples seem to have conspired against God and his Christ—disconcert the schemes of sacrilegious ambition, and the plots of impiety which would fain give the lie to the word of God. Avert, by thine intercession, the scourged which are threatening Europe, that has become ungrateful to the Church, and indifferent to the attempts made against her to whom they owe all they have. Pray that the blind may see, and the wicked be confounded. Pray that the True Faith may enlighten those numberless souls that call error truth, and darkness light. 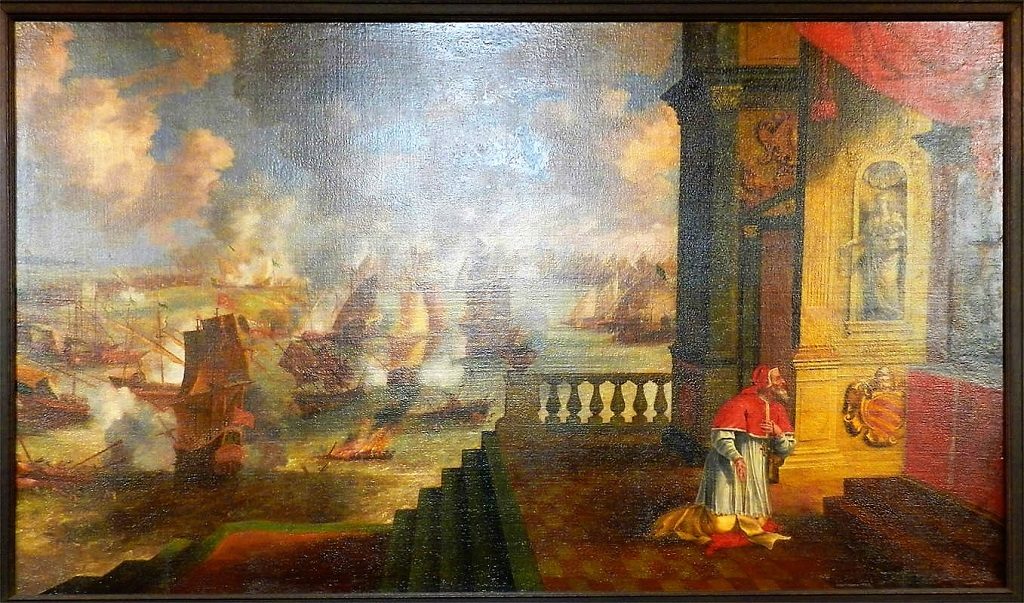 In the midst of this dark and menacing night, thine eyes, O holy Pontiff, discern them that are the faithful sheep of Christ: bless them, aid them, increase their number. Ingraft them to the venerable Tree which dieth not, that so they may not be drifted by the storm. Get them docility to the Faith and traditions of holy Church; it is their only stay amidst the tide of error, which is now threatening to deluge the whole world. Preserve to the Church the holy Order, in which thou wast trained for the high mission destined for thee; keep up within her that race of men, powerful in work and word, zealous for the Faith and sanctification of souls, of which we read in her Annals, and which has yielded Saints such as thyself. And lastly, O Pius, remember that thou wast once the Father of the Faithful: oh! continue to be so, by thy powerful intercession, till the number of the elect be filled up! 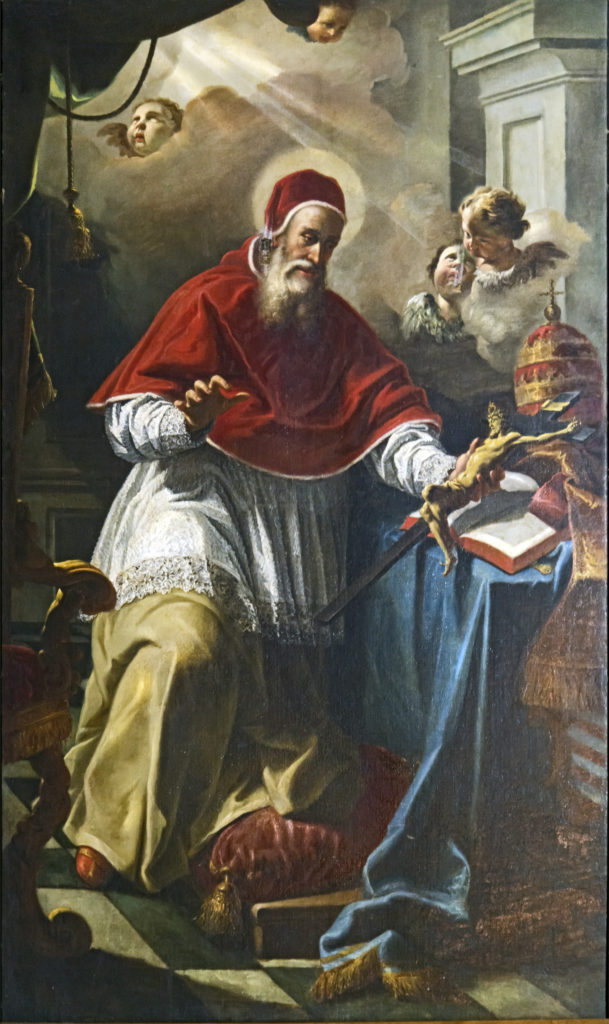