Above a window of the Dominican Church in Cologne, these words could be read since 1300: “This sanctuary was built by Bishop Albert, flower of philosophers and sages, example of customs, illustrious demolition of heresies, scourge of the perverts. Lord welcome him among your Saints ”. Pius XI carried out this vow, canonizing, in an unusual way, Albert the Great with a decretal letter (In Thesauris sapientias, of 16 December 1931), which at the same time declared him a Doctor of the Universal Church. However, the cult of the holy Doctor began shortly after his death and the Holy See approved it, because “the Lord had provided proof of his glory and holiness with numerous miracles”. In the letter cited, the Pope notes precisely this glory and this holiness.

The one, says the Pope, whom the centuries greeted with the name of Magno, really deserved so much praise. He was great in the kingdom of heaven, according to the expression of the Gospel, because he practiced and taught the divine law, because he strictly united science and holiness in himself. “He had naturally, it was said, the instinct for great things. Like Solomon, he implored the gift of wisdom, which intimately unites man to God, opens hearts and raises up the spirit of the faithful. And wisdom taught him to unite an intense intellectual life, a profound interior life, an apostolic life among the richest in fruit, because he was at the same time the initiator of a great intellectual movement, a great contemplative, and a man of action “( P. Garrigou-Lagrange, Vie spirituelle , 1933, p. 50).

He wanted to become a religious saint, introducing prayer to study. However, the study, sanctified by prayer, allowed him to assimilate the most difficult profane questions with extreme ease, to drink from the springs of divine law, in the waters of the healthiest doctrine that he already possessed in his heart. All intent on meditating on the most divine and most philosophical topics, he was nevertheless interested in all the human sciences and brought the light of his genius to them. It is enough to read the titles of his innumerable works to be convinced that no science was alien to him: experimental natural sciences, such as mineralogy, botany, zoology; abstract sciences, such as mathematics, philosophy, metaphysics. His is the merit of having understood the value of Aristotle’s works and of having dispelled the prejudices that the best spirits of the time had against the pagan philosopher. He succeeded in placing him at the service of theology and of the Church, opening the way to his great disciple, Saint Thomas Aquinas.

In him there is an insatiable thirst for knowledge, for truth, an untiring attention in observing natural phenomena, the love of the monuments of ancient wisdom, but above all a religious spirit that made him clearly perceive the admirable wisdom that shines in the creatures. The ultimate and constant goal of Albertus Magnus’s intellectual life was this: to offer the Creator, source of all truth, sum of all beauty, essence of perfection, all that is true and beautiful he would have discovered in pagan science. He “is not only great as a Doctor, but he is also great because he directs the doctrine towards life and soul. He consecrated his knowledge, his knowledge, his whole life to the service of God ”(Revue thomiste, t. XXXVI, p. 231). His theological work is imbued with sweet pity,

Intellectual and contemplative, he was also an apostle: provincial in Germany, bishop of Regensburg, preacher of the Crusade, tireless in eradicating vices, skilled in resolving conflicts, full of zeal for the administration of the sacraments, friend of the poor.

It is no wonder that the ancients said that Albertus the Great was “the wonder of the century”, that they greeted him as “Universal Doctor” and that his posterity admired him “as a wise man, as a diplomat, as a Prince of the Church and above all as a Saint “.

Given the height of his mission, Albertus the Great is not all imitable. However each of us has our mission, however modest it may be. What an example of perfect life this religious man leaves us, humble of heart and great in spirit, who has understood what the Lord asks of him and realizes it with all his faith, confidence and zeal! There is in him a spiritual magnanimity which, with God’s help, tends to the great things that God asks of him (P. Garrigou-Lagrange, ibid.). 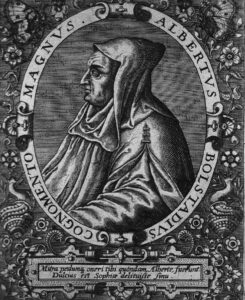 LIFE. – Albert the Great was born around 1206 in Lauingen, Bavaria. After an accurate childhood education, he went to study Law in Padua, there he met Blessed Giordano, Master General of the Preaching Friars and his exhortations led him to enter the Dominican family. He was immediately noted for his tender and filial devotion to the Virgin Mary and for his fidelity in monastic observance. Sent to Cologne to complete his studies, he applied himself so much that he seemed to have penetrated the sciences better than all his contemporaries.

Judged capable of teaching, he was appointed lecturer in Hildesheim, Freiburg, Regensburg, Strasbourg and finally in Paris, where he showed the agreement that exists between faith and reason, between pagan and sacred sciences … The most illustrious of his disciples was St. Thomas Aquinas, who later succeeded him at the Sorbonne.

Returning to Cologne, to direct the general studies of the Order, he was appointed Provincial of Germany and then Bishop of Regensburg. He worked hard for his flock, maintaining the simplicity of life of the religious, but after two years of episcopal government, he resigned in 1263. He then devoted himself to preaching, intervened to pacify princes and bishops, attended the Council of Lyon and died in 1280 By decree of December 16, 1931, Pope Pius XI inscribed him in the number of saints and proclaimed him a Doctor of the universal Church.

Be our intercessor, O Saint Albert, you who, seeking wisdom and virtue from the years of your youth, and carrying the yoke of the Lord joyfully, subjected your thoughts entirely to Christ. Christ wanted to complete your glory in our days, showing you to us as a “luminous torch that lights up the body of the whole Church”, because you worked not for yourself alone, but for all those who seek wisdom. Give us the love of wisdom, which you possessed so perfectly. In an age when science dares to stand up against faith, abandon the Master of all science and fall into materialism, show us that between science and faith, between truth and good, between dogma and holiness there are no oppositions, but instead there is intimate cohesion. ; that the pursuit of Christian perfection does not crush personal genius, the strength of the will. 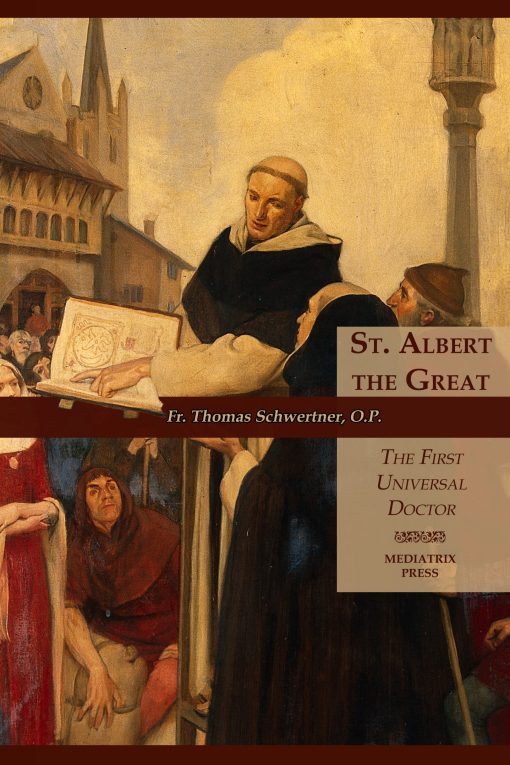 “In an age when all peoples desire peace, but do not agree on how to obtain it, forgetting even the foundations of true peace, which are justice and charity, we turn our eyes to you with confidence. Your whole being reflected the image of Christ, Prince of Peace; you possessed to a high degree the gift of conciliating, by virtue of the authority acquired for your reputation for doctrine and holiness; you have many times successfully collaborated to restore peace between states, princes and individuals. Restore and consolidate peace between us and in us, giving us the love of justice, submission to divine law and the search for the only necessary of God, towards whom we all tend and who alone can truly unite us in a solid and lasting way in this life and in the next ”(Pius XI, loc. cit.).

Devotion to the Madonna.

Finally, communicate to us the ardent devotion to the mystery of the Incarnation and the tender love for the Blessed Virgin that you had and allow us to use your words to say with you: – Be blessed, humanity of my Savior, who in the bosom of a Virgin mother you joined the divinity! Be blessed, sublime and eternal divinity, who wished to descend to us under the veil of our flesh. Be blessed forever you who have been united to a virginal flesh by virtue of the Holy Spirit! I greet you too, O Mary, because in you the divinity, in its fullness, has made its abode; I greet you, because the fullness of the Holy Spirit dwells in you! Blessed be the most pure humanity of the Son who, consecrated by the Father, came out of You. I salute you, O spotless Virginity, now elevated beyond all the choirs of the Angels! Rejoice, Queen of the world, for having been judged worthy of becoming a temple of the most pure humanity of Christ! Rejoice and rejoice, Virgin of virgins, because your most pure flesh served the union of divinity with the holy humanity of Christ.

Rejoice, Queen of Heaven, because your most chaste womb provided a worthy abode for this holy humanity! Rejoice and rejoice, Spouse of the holy Patriarchs, who have been judged worthy to nourish and nurse this holy humanity with your chaste breast! I greet you, fruitful virginity, blessed for ever, who have made us worthy to obtain the fruit of life and the joys of eternal salvation! ”.