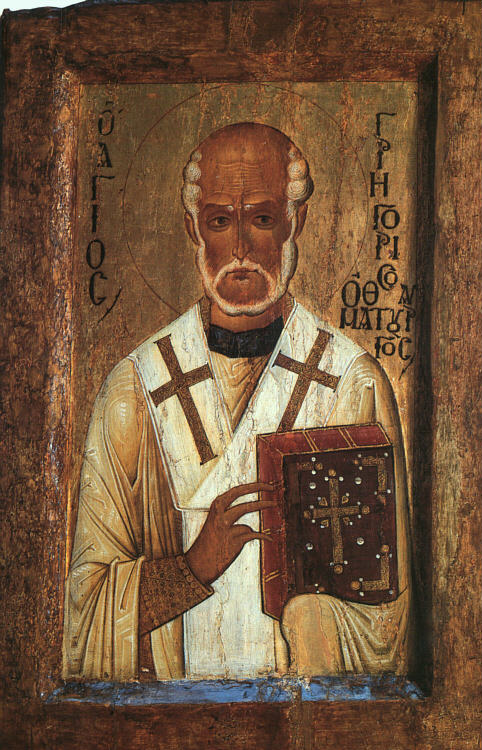 Moses instructed in all the wisdom of the Egyptians, mighty in his words and in his deeds, retired into the desert: Gregory, adorned with the best gifts of birth and nature, brilliant in rhetoric, rich in every science, hid himself from men in the flower of his youth, and hastened to offer to God in solitude the holocaust best pleasing to the Lord. Each was the hope of his race; yet each turned away to lose himself in the contemplation of heavenly mysteries. Meanwhile, the yoke of Pharaoh lay heavy upon Israel; meanwhile, souls were perishing, whom one of Gregory’s burning words might have snatched from the empire of idolatry: was not such flight, then, desertion?

Is it for man to proclaim himself a savior, when Jesus did not arrogate that title to himself? And when evil was rife all around, did the Carpenter of Nazareth do wrong to remain in the shade for thirty years previous to his short period of ministry? O ye teachers of our excited, fevered times, who dream of a new hierarchy among the virtues, and understand divine charity far otherwise than did our fathers: not those are of the race of Israel’s saviors whose ideas concerning social good differ from those of the world’s Redeemer.

Gregory, like Moses, was of that blessed race. His friends and enemies agreed in saying that he resembled the Hebrew legislator in the excellence of his virtue, and in the splendor of the prodigies wrought by his word. Both were actuated by the desire of knowing God, and manifesting him to the men they were called to lead: the fulness of doctrine is the gift most necessary to the guides of the people, and their want of it the greatest penury. I am who am was the answer to Moses’ enquiry; and this sublime formula, confided to him from the midst of the burning bush, authenticated the mission which called him forth from the desert. When Gregory was commanded by God to go out in to the world, the blessed Virgin, of whom the burning bush was a figure, appeared before his dazzled eyes in the dark night when he was praying for light. And St. John, following the Mother of God, let fall from his lips this other formula completing the former for the disciples of the Law of love:

“One only God, Father of the living Word, of that substantial and mighty Wisdom who is the eternal expression of himself; the perfect principle of the only and perfect Son begotten by him. One only Lord, sole-begotten of the Only one; God of God, efficacious Word, Wisdom embracing and containing the world, creative power of all creation, true Son of a true Father. One only Holy Spirit, holding of God his divine existence, revealed to men by the Son of whom he is the perfect likeness, life and life-giving, holy and imparting holiness. The perfect Trinity, immutable, inseparable in glory, in eternity, in dominion.” 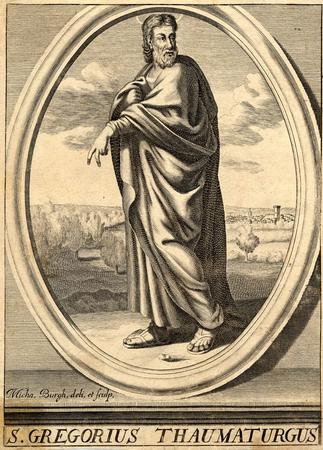 This was the message our Saint was to communicate to his country, the creed that was to bear his name in the Church. By his faith in the most holy Trinity he was to remove mountains, and set limits to the waves, to drive out Satan, and eradicate infidelity from Pontus. When, towards the year 240, Gregory, then bishop, was on his way to Neocæsarea, he saw on all sides the temples of idols, and stopped for the night at a famous sanctuary. In the morning all the gods had taken to flight and refused to come back; but the Saint gave to the priest of the oracle a note thus worded: Gregory to Satan: return. A more bitter defeat awaited the demons; forced to stay their precipitate retreat, they were compelled to witness the ruin of their empire over the souls they had abused. The priest was the first to give himself up to the Bishop, and became his deacon; and soon upon the ruins of the temples everywhere overthrown arose the Church of Christ, the only God.

Happy was that Church, so firmly founded that heresy was powerless against it in the following century, when so many others bowed before the storm of Arianism. On the testimony of St. Basil, the successors of St. Gregory, themselves eminent men, were as an adornment of precious stones, a crown of stars, to the Church of Neocæsarea. Now all these illustrious Pontiffs, says he, considered it an honor to keep up the memory of their great predecessor; they would never suffer that any act, word, or movement other than his, in performing the sacred rites, should prevail over the traditions he had left.

When Clement XII, as we have seen, established in the entire Church the feast of St. Gertrude the Great, he at first decreed that it should be kept on this day, on which it is still celebrated by the Order of St. Benedict. But as the 17th of November had been for long centuries assigned to St. Gregory Thaumaturgus, it seemed unfitting, said Benedict XIV that he who moved mountains should himself be moved from his place by the holy virgin. Accordingly in 1739, the year following its institution, the feast of St. Gertrude was fixed on the fifteenth of this month (moved back a day in 1931 following the canonization of Albert the Great). 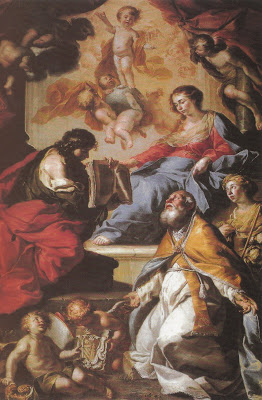 Let us read the brief account of the great Thaumaturgus given in the holy Liturgy.

O holy Pontiff, thy faith, removing mountains and commanding the waves, was a justification of our Lord’s promise. Teach us in our turn to do honor to the Gospel, by never doubting of our Lord’s word and of the help he promises us against Satan, whom the Church points out to us today as the proud mountain that is to be cast into the sea; and also against the overflowing tide of our passions, and the enticements of the world, of which thy writings teach us the vanity. After the victory let us not forget that the succor came to us from heaven; preserve us from ingratitude, which thou didst so detest. We still possess the touching eulogy dictated by thy gratitude towards the illustrious master, to whose teachings, under God, thou didst owe the glorious strength and splendor of thy faith. Here is a precious and practical lesson for all: while praising divine Providence in the man who was his predestined instrument in thy regard, thou didst not forget the homage due to the Angel of God, who had preserved thee from falling into the abyss, during the darkness of infidelity in which thy first years were spent; that heavenly Guardian who, ever watchful in his active, enlightened, persevering devotedness, supplies for our insufficiencies, nourishes and instructs us, leads us by the hand, and secretly arranges for our souls those blessed circumstances and occasions, which transform our life and secure eternal happiness.

How can we sinful creatures sufficiently thank the Author of all good, the infinite Being who gives to man both the holy Angels and the visible intermediaries of divine grace on earth? But let us take courage, for we have as our Head his own Son, his Word who saved our souls, and who rules the universe. He alone, and that without effort, can render to his Father unceasing, eternal thanksgiving, for himself and for us all, without risk of not knowing or of forgetting the least subject of gratitude, without fear of any imperfection in the manner or the magnitude of his praise. To him, then, to the divine Word, we commit as thou didst, O Gregory, the care of perfecting the expression of our gratitude for the unspeakable kindness of our heavenly Father; for the Word is to us, as to thee, the only channel of piety, gratitude, and love. May he give us in these days pastors who will imitate thy works; and may he raise up again the ancient churches of the East, which once received such light from thee! 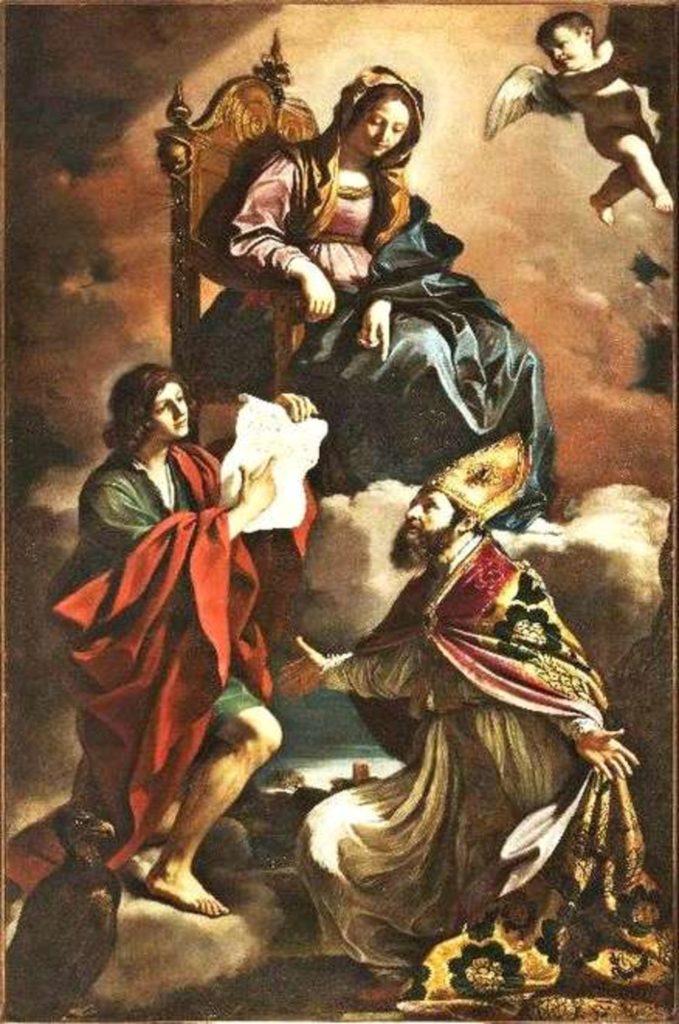