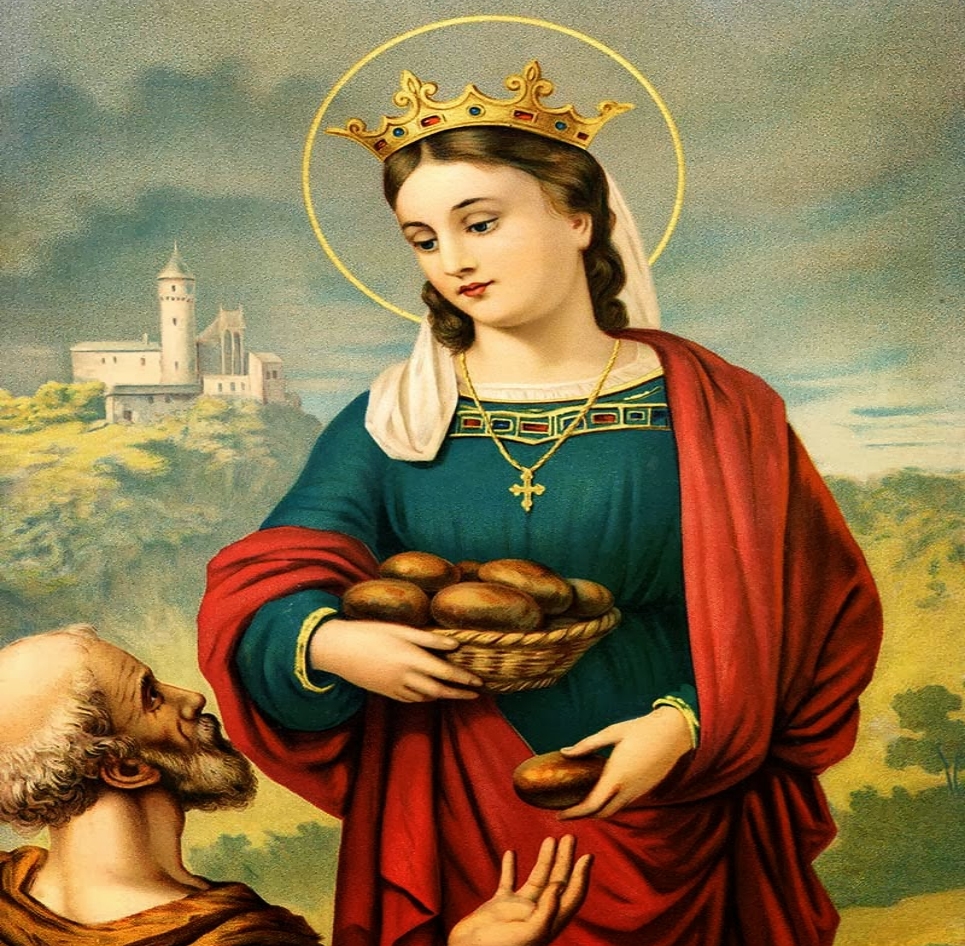 Although the blessed in heaven shine each with his own peculiar glory, God is pleased to group them in families, as he groups the stars in the material firmament. It is grace that presides over the arrangement of these constellations in the heaven of the Saints; but sometimes it seems as if God wished to remind us that he is the sole Author of both grace and nature; and inviting them, in spite of the fall, to honor him unitedly in his elect, he causes sanctity to become a glorious heirloom, handed down from generation to generation in the same family on earth. Among these races, none can compare with that royal line which, beginning in ancient Pannonia, spread its branches over the world in the most flourishing days of Christendom: Rich in virtue and studying beautifulness, as Scripture says, it brought peace into all the royal houses of Europe, with which it was allied; and the many names it has inscribed in the golden book of the blessed, perpetuate its glory.

Among these illustrious names, and surrounded by them as a diamond set in a circle of pearls, the greatest, in the esteem of the Church and of the people, is that of the amiable Saint, who was ripe for heaven at the age of twenty-four years, and who ascended on this day into the company of Stephen, Emeric, and Ladislas. Elizabeth was not inferior to them in manly virtues; but the simplicity of her loving soul added to the heroism of her race a sweetness, whose fragrance drew after her along the path of sanctity her daughter Gertrude of Thuringia, and her relatives Hedwige of Silesia, Agnes of Bohemia, Margaret of Hungary, Cunigund of Poland, and Elizabeth of Portugal.

All the poetry of those chivalrous times appears in the beautiful pages of contemporaneous writers, as they describe to us the innocent child, transplanted like a tender flower from the court of Hungary to that of Thuringia; and her life of devotedness there, with a bridegroom worthy to witness the ecstasies of her lofty but ingenuous piety, and to defend her heroic virtue against her slanderers. To the stewards who complained that during the absence of Duke Lewis she had, in spite of their remonstrances, exhausted the revenues upon the poor, he replied: “I desire that my Elizabeth be at liberty to act as she wishes, provided she leaves me Warteburg and Naumburg.” Our Lord opened the landgrave’s eyes to see transformed into beautiful roses the provisions Elizabeth was carrying to the poor. Jesus crucified appeared in the leper she had taken into her own apartments that she might the better tend him. If it happened that illustrious visitors arrived unexpectedly, and the duchess having bestowed all her jewels in alms was unable to adorn herself becomingly to do them honor, the Angels so well supplied the deficiency that, according to the German chroniclers of the time, it seemed to the astonished guests that the Queen of France herself could not have appeared more strikingly beautiful or more richly attired.

Elizabeth indeed was never wanting to any of the obligations or requirements of her position as a wife and as a sovereign princess. As graciously simple in her virtues as she was affable to all, she could not understand the gloomy moroseness which some affected in their prayers and austerities. “They look as if they wanted to frighten our Lord,” she would say, “whereas he loves the cheerful giver.”

The time soon came when she herself had to give generously without counting the cost. First there was the cruel separation from her husband, Duke Lewis, on his departure for the crusade; then the heart-rending scene when his death was announced to her just as she was about to give birth to her fourth child; and thirdly the atrocious act of Henry Raspon, the landgrave’s unworthy brother, who, thinking this a good opportunity for seizing the deceased’s estates, drove out his widow and children, and forbade anyone to give them hospitality. Then in the very land where every misery had been succored by her charity, Elizabeth was reduced to the necessity of begging, and not without many rebuffs, a little bread for her poor children, and of seeking shelter with them in a pig sty. 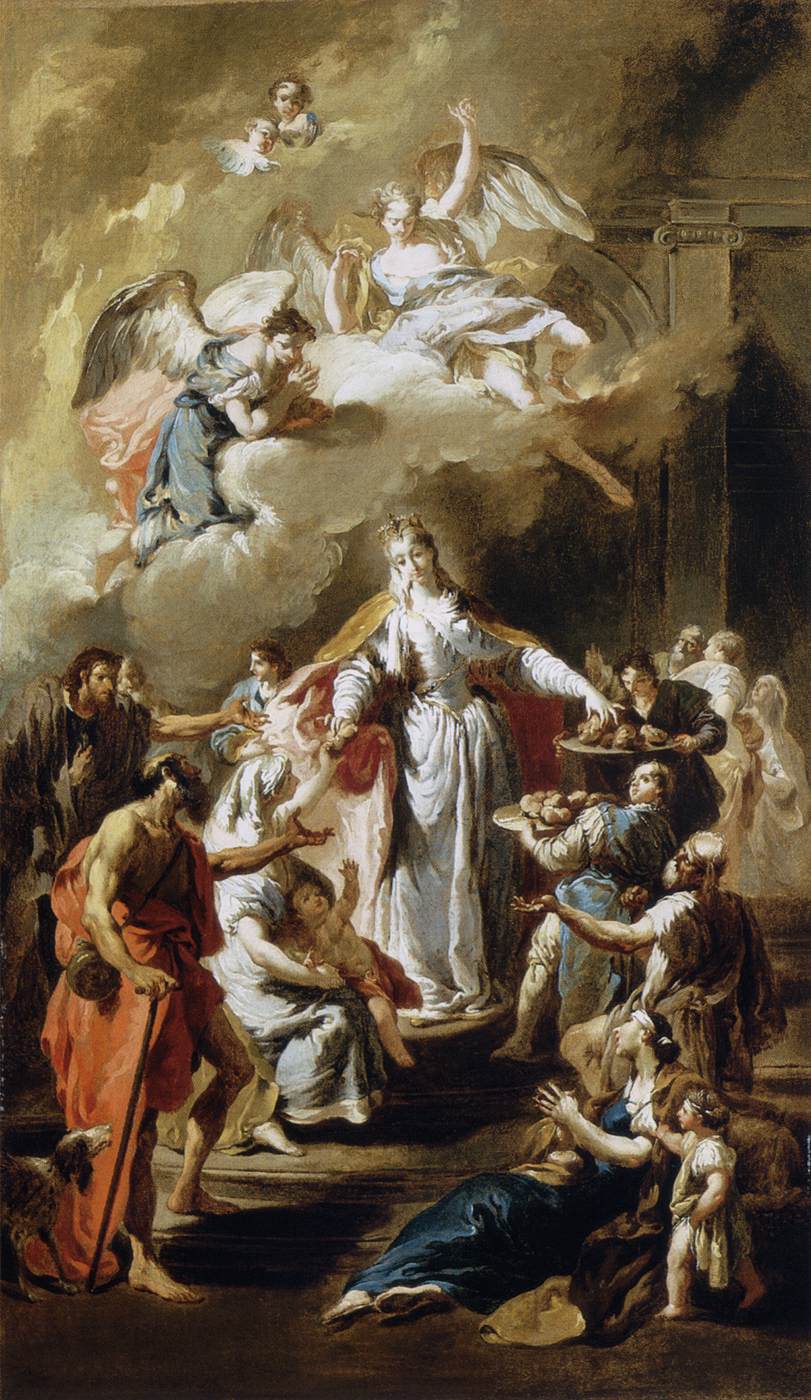 On the return of the knights who had accompanied Duke Lewis to the Holy Land, justice was at length done to our Saint. But Elizabeth, who had become the passionate lover of holy poverty, chose to remain among the poor. She was the first professed Tertiary of the Seraphic Order; and the mantle sent by St. Francis to his very dear daughter became her only treasure. The path of perfect self-renunciation soon brought her to the threshold of heaven. She who, twenty years before, had been carried to her betrothed in a silver cradle, and robed in silk and gold, now took her flight to God from a wretched hovel, her only garment being a patched gown. The minstrels, whose gay competitions had signalized the year of her birth, were no longer there; but the Angels were heard singing, as they bore her up to heaven: The kingdom of this world have I despised, for the love of Jesus Christ my Lord, whom I have seen, whom I have loved, in whom I have believed, whom I have tenderly loved.

Four years later, Elizabeth, now declared a Saint by the Vicar of Christ, beheld all the nations of the holy Empire, with the emperor himself at their head, hastening to Marburg, where she lay at rest in the midst of the poor whose life she had imitated. Her holy body was committed to the care of the Teutonic Knights, who in return for the honor, made Marburg one of the headquarters of their Order, and raised to her name the first Gothic church in Germany. Numerous miracles long attracted the Christian world to the spot.

And now, though still standing, though still beautiful in its mourning, St. Elizabeth’s at Marburg knows its glorious titular only by name. And at Warteburg, where the dear Saint went through the sweetest episodes of her life as a child and as a bride, the great memorial now shown to the traveler is the pulpit of an excommunicated monk, and the ink-stain with which, in a fit of folly or drunkenness, he had soiled the wall, as he afterwards endeavored with his pen to profane and sully everything in the Church of God. 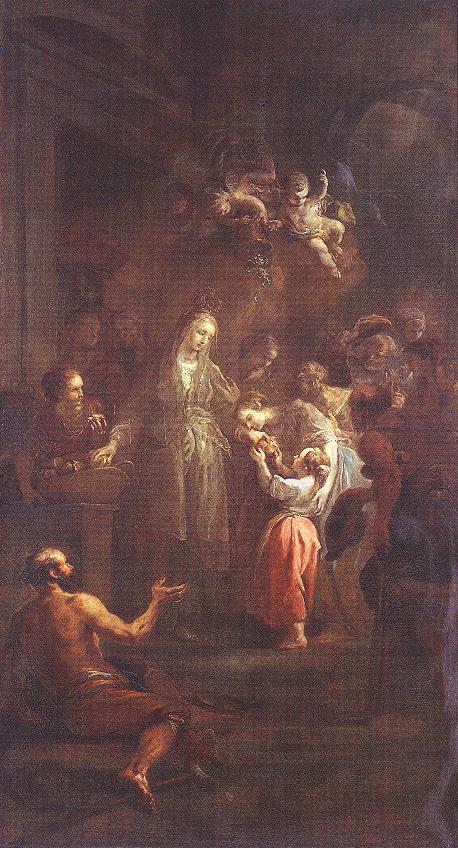 It is time to read the liturgical history of the feast. 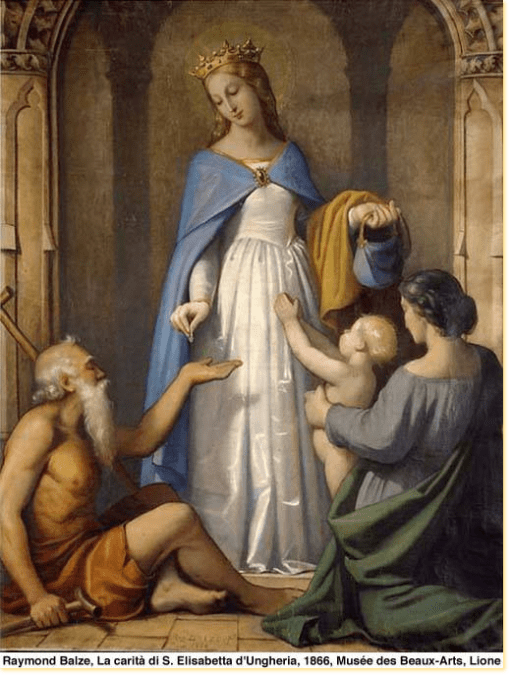 The following Hymn in honor of St. Elizabeth was sung in Germany in the fourteenth century.

What a lesson thou leavest to the earth, as thou mountest up to heaven, O blessed Elizabeth! We ask with the Church, for ourselves and for all our brethren in the faith: may thy glorious prayers obtain from the God of mercy that our hearts may open to the light of thy life’s teaching, so that despising worldly prosperity we may rejoice in heavenly consolations. The Gospel read in thy honor today tells us that the kingdom of heaven is like to a hidden treasure, and to a precious pearl; the wise and prudent man sells as he has, to obtain the treasure or the pearl. Thou didst well understand this good traffic, as the Epistle calls it, and it became the good fortune of all around thee: of thy happy subjects, who received from thee succor and assistance for both soul and body, of thy noble husband, who found an honorable place among those princes who knew how to exchange a perishable diadem for an eternal crown; in a word, of all who belonged to thee. Thou wast their boast; and several among them followed in thy footsteps along the heavenward path of self-renunciation. How is it that others, in an age of destruction, could abjure their title of children of Saints, and draw the people after them to deal so wantonly with the sweetest memorials and the noblest traditions? May our Lord restore to his Church and to thee the country where thou didst experience his love; may thy supplications, united with ours, revive the ancient faith in those branches of thy stock which are no longer nourished with that life-giving sap; and may the glorious trunk continue, in its faithful branches, to give saints to the world. 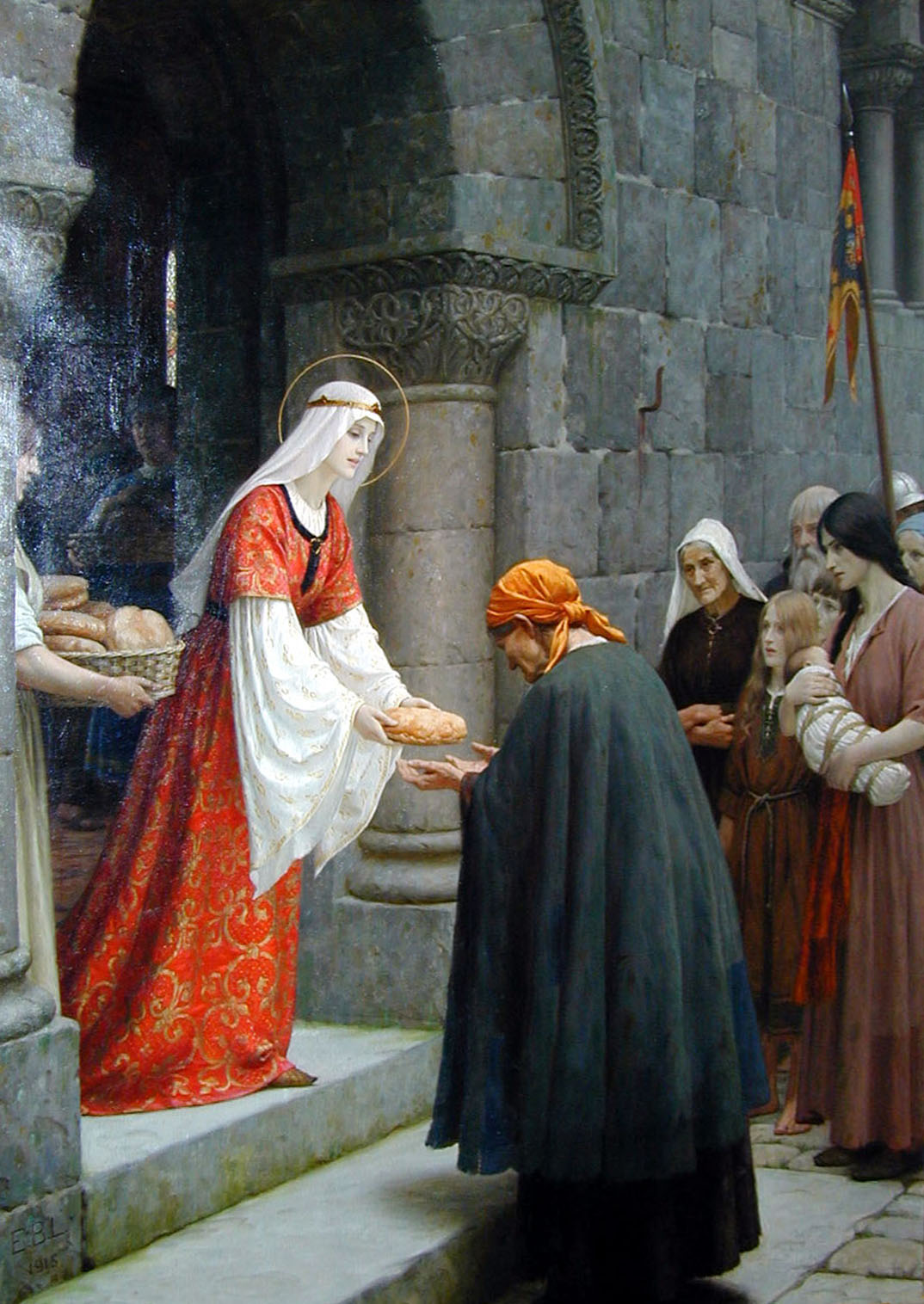 The Church honors today a holy Pope of the persecution times, by name Pontian. Transported by order of the emperor Maximin to an island in the Mediterranean, he there suffered most cruel treatment, which earned him the crown of martyrdom. His second successor, St. Fabian, translated his body to the cemetery of Callixtus. 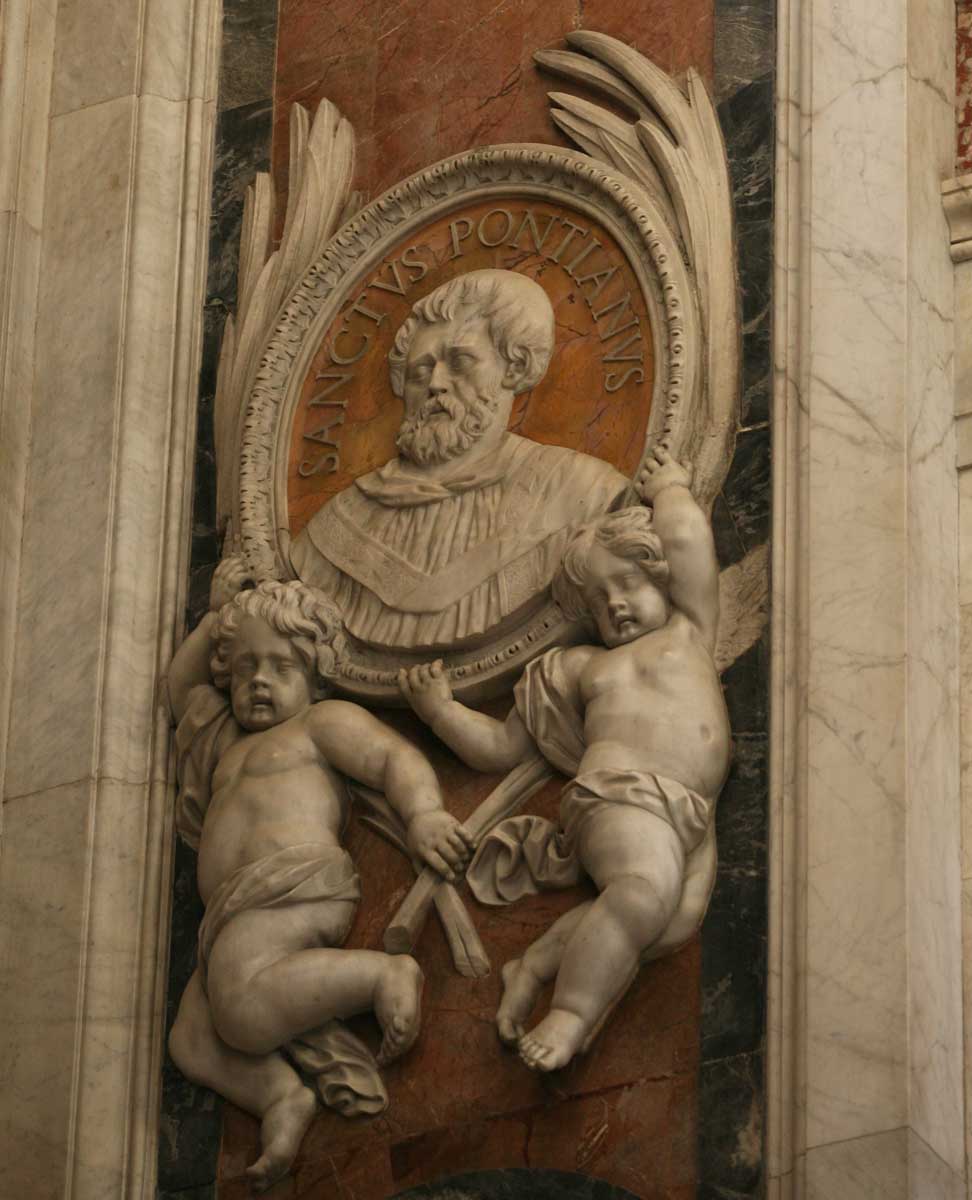