November 21 – The Presentation of the Blessed Virgin Mary

The Presentation is one of the minor solemnities of our Lady, and was inscribed at a comparatively late date on the sacred Cycle; it seems to court the homage of our silent contemplation. The world, unknown to itself, is ruled by the secret prayers of the just; and the Queen of saints, in her hidden mysteries, wrought far more powerfully than the so-called great men, whose noisy achievements fill the annals of the human race.

The East had been celebrating for seven centuries at least (Pitra, Analecta sacra Spicilegio Solesmensi parata i, 275) the entrance of the Mother of God into the temple of Jerusalem , (Menæa, ad. diem hanc.)  when in 1372 Gregory XI permitted it to be kept for the first time (Le Blant, No. 542 “Inscriptions chrétiennes de la Gaule”) by the Roman court at Avignon. Mary in return broke the chains of captivity that had bound the Papacy for seventy years; and soon the successor of St. Peter returned to Rome. The feast of the Visitation, as we saw on July 2nd, was in like manner inserted in the Western Calendar to commemorate the reestablishment of unity after the schism which followed the exile.

In 1373, following the example of the Sovereign Pontiff, Charles V of France introduced the feast of the Presentation into the chapel of his palace. By letters dated the 10th of November 1374, to the masters and students of the college of Navarre, he expressed his desire that it should be celebrated throughout the kingdom: “Charles, by the grace of God king of the Franks, to our dearly beloved: health in him who ceases not to honor his Mother on earth. Among other objects of our solicitude, of our daily care and diligent meditation, that which rightly occupies our first thoughts is that the blessed Virgin and most holy Empress be honored by us with very great love, and praised as becomes the veneration due to her. For it is our duty to glorify her; and we, who raise the eyes of our soul to her on high, know what an incomparable protectress she is to all, how powerful a mediatrix with her blessed Son, for those who honor her with a pure heart … Wherefore, wishing to excite our faithful people to solemnize the said feast, as we ourselves propose to do by God’s assistance every year of our life, we send this Office to your devotion, in order to increase your joy.” (Launoy., Historia Navarre…)

Such was the language of princes in those days. Now just at that very time, the wise and pious king, following up the work begun at Brétigny by our Lady of Chartres, rescued France from its fallen and dismembered condition. In the States then, as well as in the Church, at this moment so critical for both, our Lady in her Presentation commanded the storm, and the smile of the infant Mary dispersed the clouds.

The new feast, enriched with Indulgences by Paul II, had gradually become general when St. Pius V, wishing to diminish the number of Offices on the universal Calendar, included this one among his suppressions. But Sixtus V restored it to the Roman Breviary in 1585, and shortly afterwards Clement VIII raised it to the rank of Double Major. Soon the Clergy and Regulars adopted the custom of renewing their holy vows on this day, whereon their Queen had opened before them the way that leads by sacrifice to the special love of our Lord.

Hearken, O daughter, and see, and incline thy ear, and forget thy people and thy father’s house; and the King shall greatly desire thy beauty. Thus, wording the wishes of the daughters of Tyre, sang the Church of the expectation, on the summit of Mount Moriah; and penetrating the future with her inspired glance, she added: After her shall virgins be brought to the King, her neighbors shall be brought to thee; they shall be brought with gladness and rejoicing: they shall be brought into the temple of the King. Hailed beforehand as beautiful above the sons of men, this King, the most mighty, makes on this day a prelude to his conquests; and even this beginning is wonderful. Through the graceful infant now mounting the temple steps, he takes possession of that temple, whose priests will hereafter vainly disown him: for this child, whom the temple welcomes today, is his throne. Already his fragrance precedes and announces him, in the Mother in whose bosom he is to be anointed with the oil of gladness, as the Christ among his brethren; already the Angels hail her as the Queen whose fruitful virginity will give birth to all those consecrated souls, who keep for the divine Spouse the myrrh and the incense of their holocausts, those daughters of kings who are to form her court of honor. (Psalm 44) 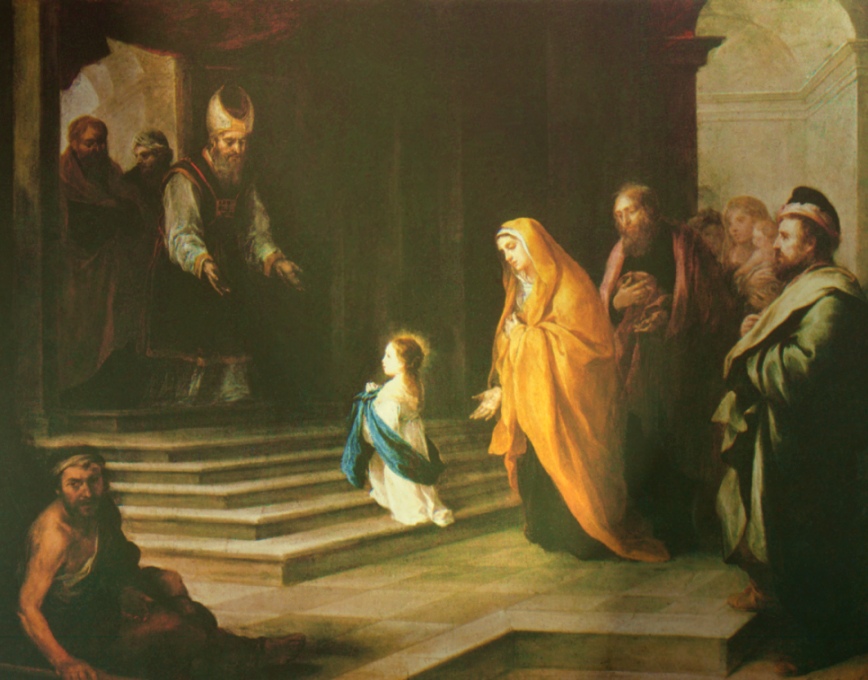 But our Lady’s Presentation also opens new horizons before the Church. On the Cycle of the Saints, which is not so precisely limited as that of the Time, the mystery of Mary’s sojourn in the sanctuary of the Old Covenant is our best preparation for the approaching season of Advent. Mary, led to the temple in order to prepare in retirement, humility, and love for her incomparable destiny, had also the mission of perfecting at the foot of the figurative altar the prayer of the human race, of itself ineffectual to draw down the Savior from heaven. She was, as Saint Bernardine of Siena says, the happy completion of all the waiting and supplication for the coming of the Son of God; in her, as in their culminating point, all the desires of the saints who had preceded her found their consummation and their term. (Bernardine of Siena, Pro festivitatibus V. Mariæ, Sermon 4)

Through her wonderful understanding of the Scriptures, and her conformity, daily and hourly, to the minutest teachings and prescriptions of the Mosaic ritual, Mary everywhere found and adored the Messias hidden under the letter; she united herself to him, immolated herself with him in each of the many victims sacrificed before her eyes; and thus she rendered to the God of Sinai the homage, hitherto vainly expected, of the Law understood, practiced, and made to fructify, in all the fullness that beseemed its divine Legislator. Then could Jehovah truly say: As the rain and the snow come down from heaven and return no more thither, but soak the earth and water it, and make it to spring: … so shall my word be: … it shall not return to me void, but it shall do whatsoever I please. (Isaiah 55:10-11) 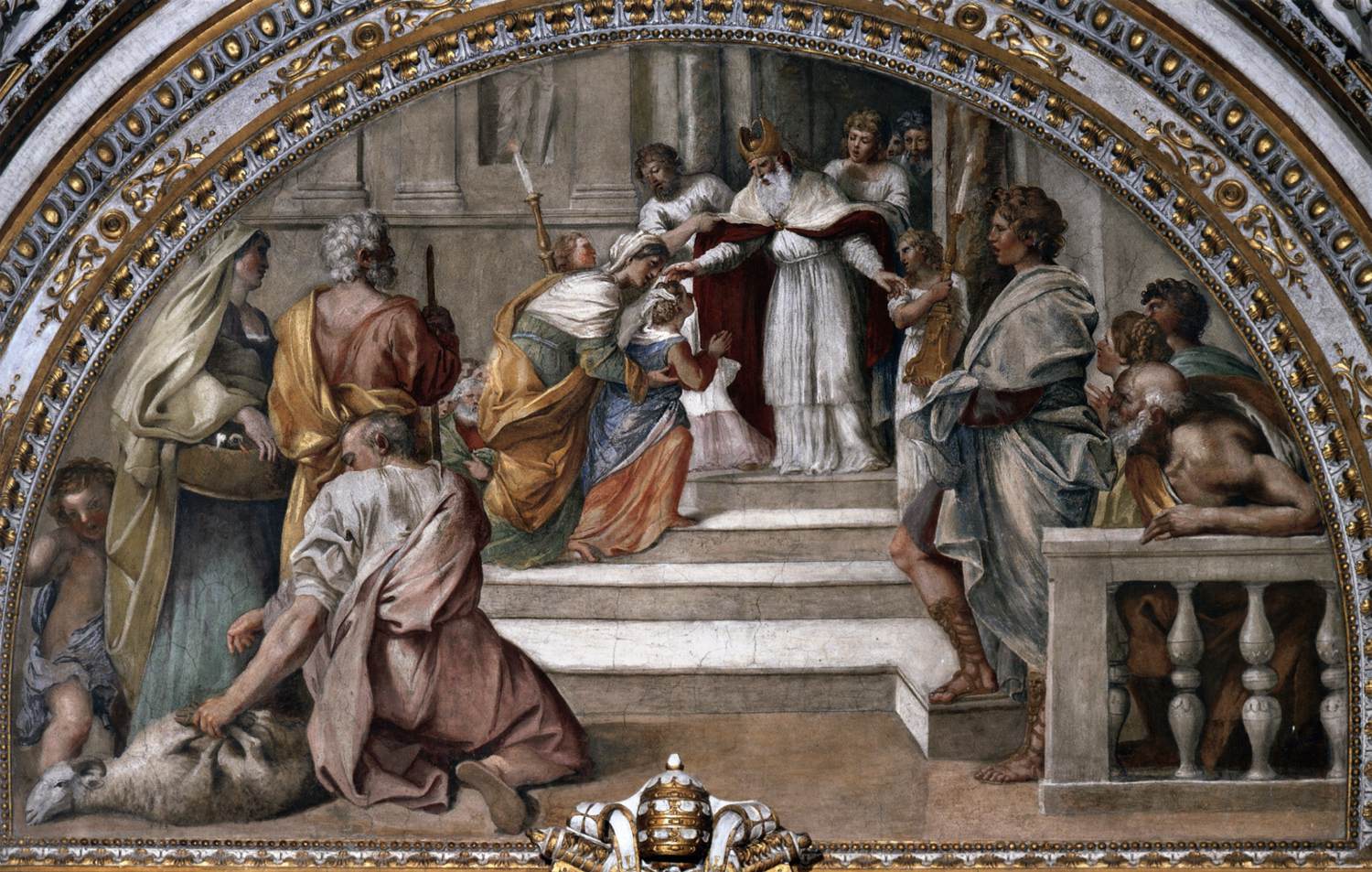 Supplying thus for the deficiencies of the Gentiles as well as of the Synagogue, Mary beheld in the Bride of the Canticle the Church of the future. In our name she addressed her supplications to him whom she recognized as the Bridegroom, without however knowing that he was to be her own Son. Such yearnings of love, coming from her, were sufficient to obtain from the divine Word pardon for the infidelities of the past, and the immorality into which the wandering world was plunging deeper and deeper. (Olier. “Vie intérieure de la très sainte Vierge, Présentation”) How well did this Ark of the New Covenant replace that of the Jews, which had perished with the first temple! It was for her, though he knew it not, that Herod the Gentile had continued the construction of the second temple, after it had remained desolate since the time of Zorobabel; for the temple, like the tabernacle before it, was but the home of the ark destined to be God’s throne; but greater was the glory of the second temple which sheltered the reality, than of the first which contained but the figure.

The Greeks have chosen for the Lessons of the feast the passages of Scripture which describe the carrying of the Ark into the tabernacle of the desert, (Exodus 40) and afterwards into the temple of Jerusalem. (1 Kings 8) The historical Lesson relates the traditions concerning the oblation of the Blessed Virgin by her holy parents to God in the temple, at the age of three years, there to dwell until, after the lapse of twelve years, the mystery of our salvation was to be accomplished in her.

In the sixth century, the emperor Justinian built, in honor of the Presentation, a magnificent church, on the southern part of the platform on which had formerly stood the temple and its annexes. It is now the mosque El-Aksa. 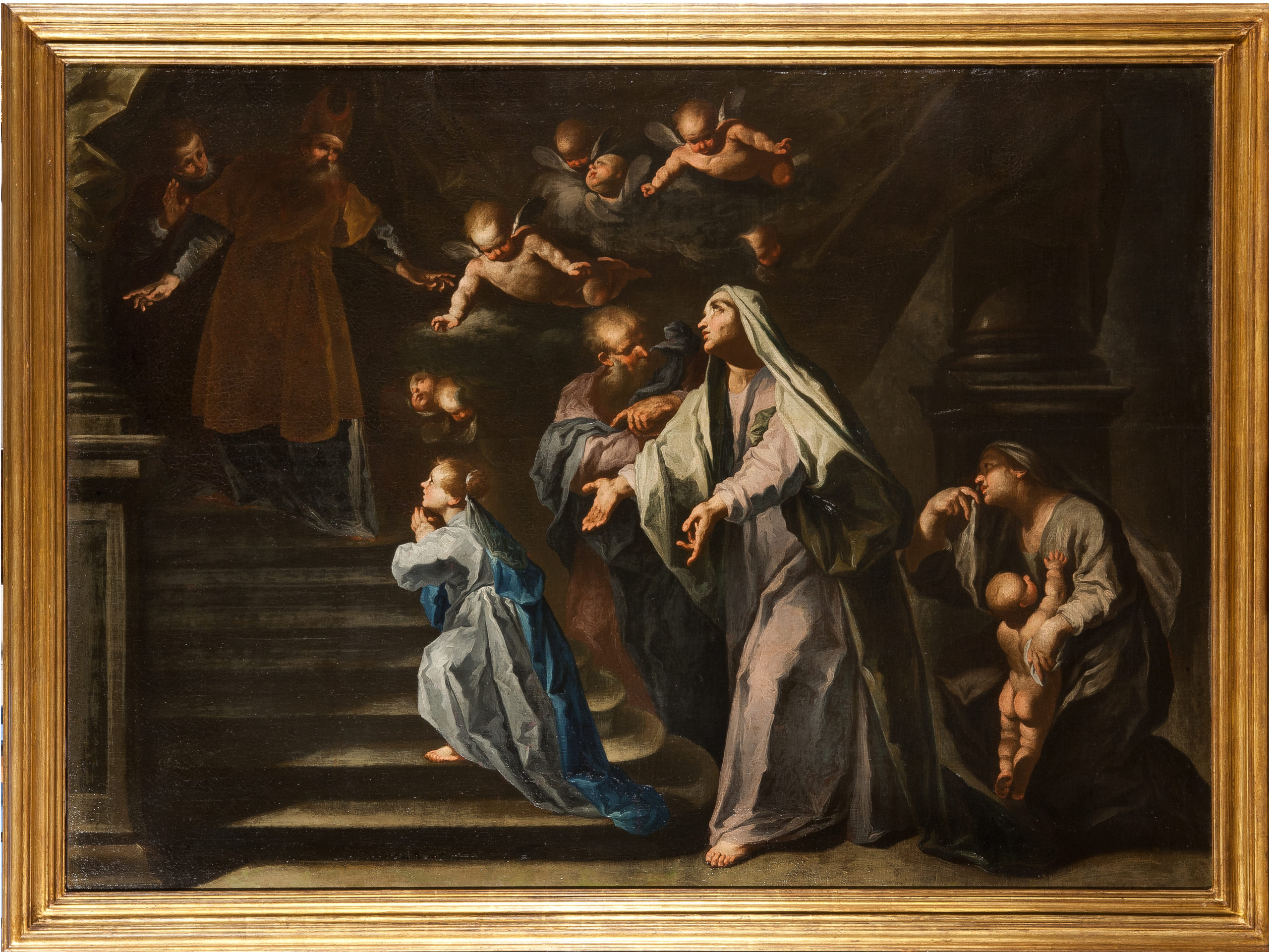 The next century gives us the following strophes, which bear witness to the antiquity of the feast.

In the fifteenth and sixteenth centuries, many churches used to sing on this day the following Prose, composed as an acrostic on the words: Ave Maria, benedico te, Amen. Hail Mary, I praise thee, Amen. 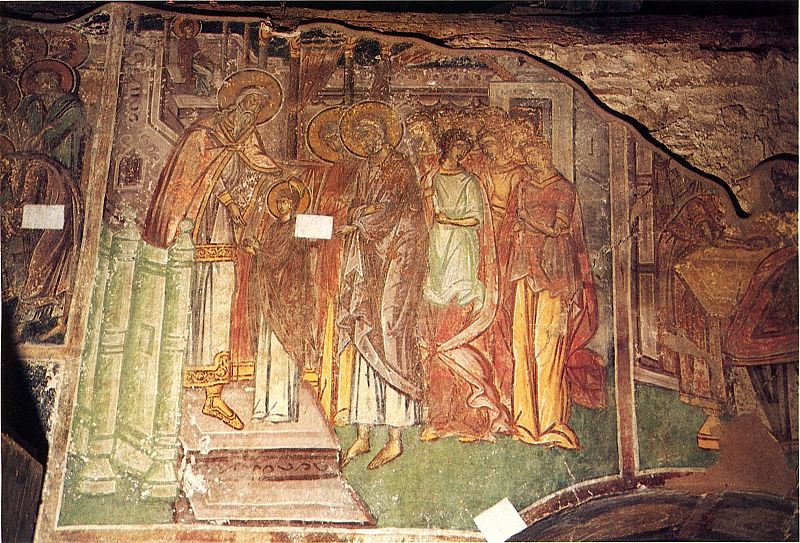 “Congratulate me, all ye that love the Lord, because when I was a little one I pleased the Most High.” Such is the invitation thou addressest to us, O Mary, in the Office chanted in thy honor; and on what feast couldst thou do so more appropriately?

When, even more little in thy humility than by thy tender age, thou didst mount, in thy sweet purity, the steps of the temple, all heaven must have owned that it was henceforth just for the Most High to take his delight in our earth. Having hitherto lived in retirement with thy blessed parents, this was thy first public act; it showed thee for a moment to the eyes of men, only to withdraw thee immediately into deeper obscurity. But, as thou wast officially offered and presented to the Lord, he himself doubtless surrounded by the princes of his court, presented thee not less solemnly to those noble spirits as their Queen. In the fullness of the new light that then burst upon them, they understood at once thy incomparable greatness, the majesty of the temple where Jehovah was receiving an homage superior to that of their nine choirs, and the august prerogative of the Old Testament to have thee for its daughter, and to perfect, by its teachings and guidance during those twelve years, the formation of the Mother of God.

Holy Church, however, declares that we can imitate thee, (Ambrose, de Virginibus, 2) O Mary, in this mystery of thy Presentation, as in all others. Deign to bless especially those privileged souls who, by the grace of their vocation, are even here below dwellers in the house of the Lord: may they be like that fruitful olive enriched by the Holy Spirit, to which St. John Damascene compares thee. (Damascene. de Fide oxthodoxa, 4) But is not every Christian, by reason of his Baptism, an indweller and a member of the Chruch, God’s true sanctuary, prefigured by that of Moriah? May we, through thy intercession, follow thee so closely in thy Presentation, even here in the land of shadows, that we may deserve to be presented after thee to the Most High in the temple of his glory. 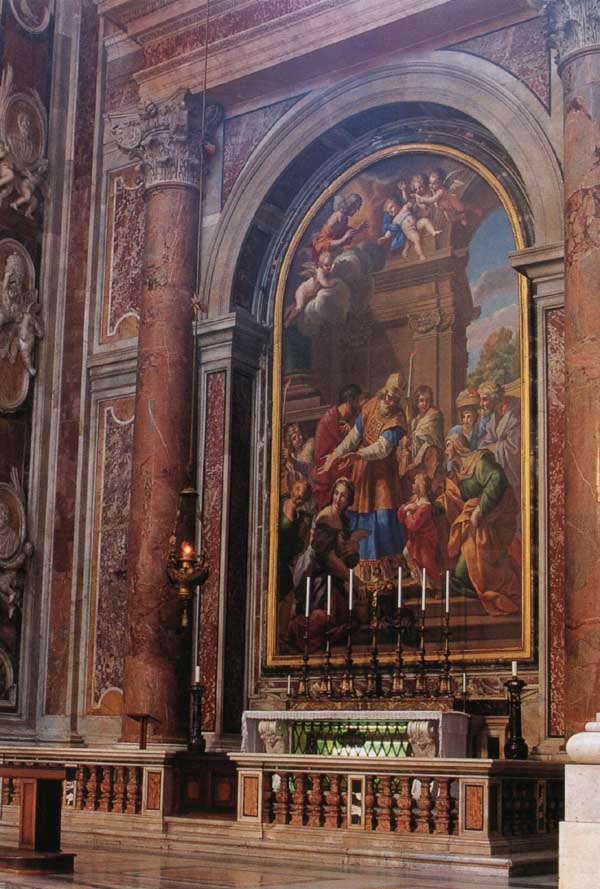