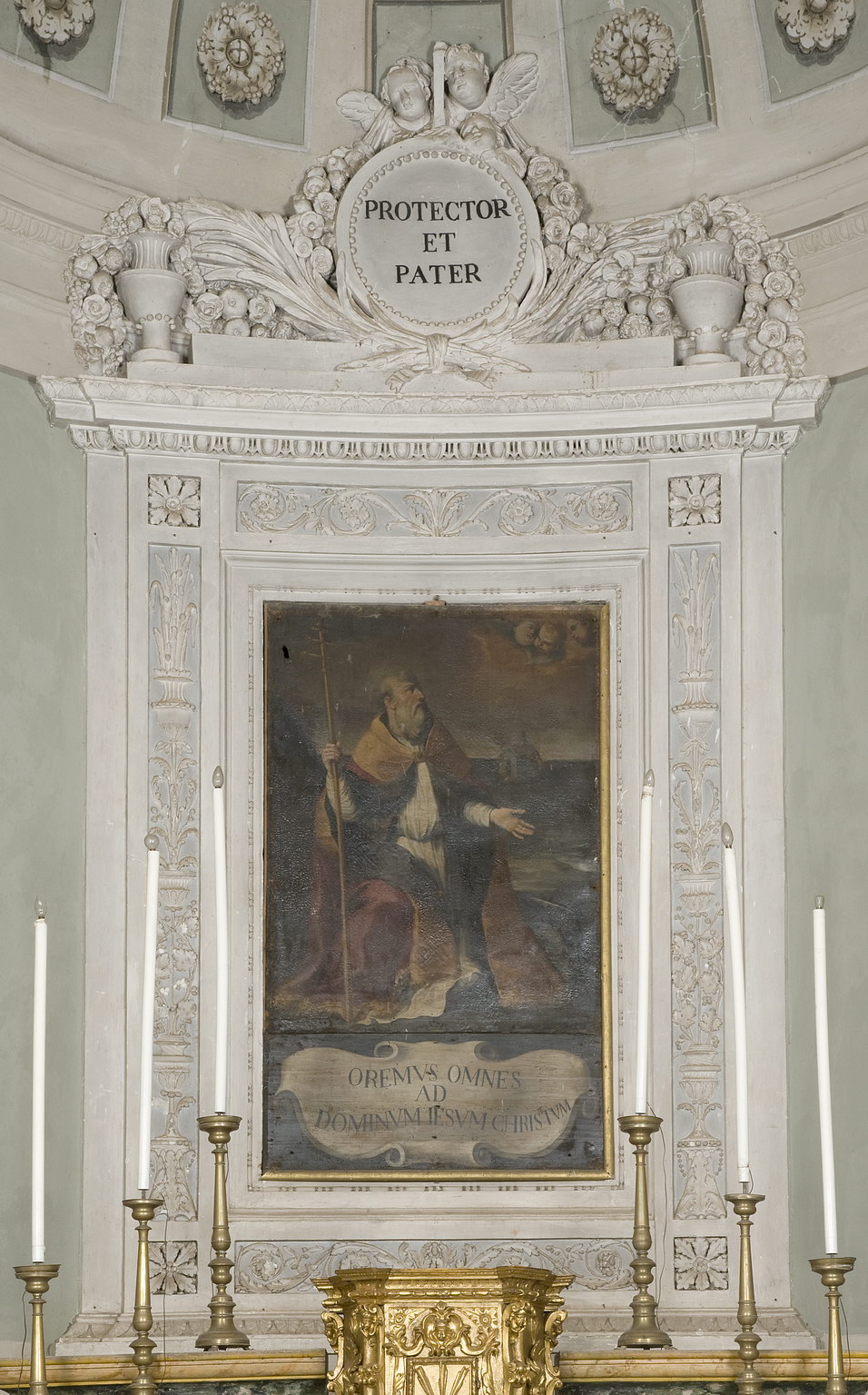 The memory of St. Clement has been surrounded with a peculiar glory from the very beginning of the Roman Church. After the death of the Apostles, he seems to eclipse Linus and Cletus, although these preceded him in the Pontificate. We pass as it were naturally from Peter to Clement; and the East celebrates his memory with no less honor than the West. He was in truth the universal Pontiff, and his acts as well as his writings are renowned throughout the entire Church. This widespread reputation caused numbers of apocryphal writings to be attributed to him, which, however, it is easy to distinguish from his own. But it is remarkable that all the falsifiers who have thought fit to put his name to their own works, or to invent stories concerning him, agree in declaring that he was of imperial descent.

With only one exception, all the documents which attest Clement’s intervention in the affairs of distant churches have perished with time; but the one that remains shows us in full action the monarchical power of the Bishop of Rome at that primitive epoch. The church of Corinth was disturbed with intestine quarrels, caused by jealousy against certain pastors. These divisions, the germ of which had appeared even in St. Paul’s time, had destroyed all peace, and were causing scandal to the very pagans. The Corinthians at last felt the necessity of putting an end to a disorder which might be prejudicial to the extension of the Christian faith; and for this purpose it was requisite to seek assistance from outside. The Apostles had all departed this life, except St. John, who was still the light of the Church. It was no great distance form Corinth to Ephesus, where the Apostle resided: yet it was not to Ephesus but to Rome that the Church of Corinth turned. Clement examined the case referred to his judgment by that Church, and sent to Corinth five commissaries to represent the Apostolic See. They were bearers of a letter, which St. Irenaeus calls potentissimas litteras. It was considered at the time so beautiful and so apostolic, that it was long read in many churches as a sort of continuation of the canonical Scriptures. Its tone is dignified but paternal, according to St. Peter’s advice to pastors. There is nothing in it of a domineering spirit; but the grave and solemn language bespeaks the universal pastor, whom none can disobey without disobeying God himself. These words so solemn and so firm wrought the desired effect: peace was reestablished in the church of Corinth, and the messengers of the Roman Pontiff soon brought back the happy news. A century later, St. Dionysius, Bishop of Corinth, expressed to Pope St. Soter the gratitude still felt by his flock towards St. Clement for the service he had rendered.

Brought up in the school of the Apostles, Clement had retained their style and manner. These are visible in his two Letters to virgins, which are mentioned by St. Epiphanius and St. Jerome, and were found in the eighteenth century translated into Syriac, in a manuscript brought from Aleppo. As St. Caecilia reminded us yesterday, the principle of chastity being vowed to God was, from the very beginning, one of the bases of Christianity, and one of the most effectual means for the transformation of the world. Christ himself had praised the superior merit of this sacrifice; and St. Paul, comparing the two states of life, taught that the virgin is wholly taken up with our Lord, while the married woman, whatever her dignity, is divided. Clement had to develop this doctrine, and he did so in these two letters. Anticipating those great doctors of Christian virginity, St. Athanasius, St. Ambrose, St. Jerome, St. John Chrysostom, St. Augustin, he developed the teachings of St. Peter and St. Paul on this important subject. “He or she,” he says, “who aspires to this higher life, must lead like the Angels an existence all divine and heavenly. The virgin cuts herself off from the allurements of the senses; not only does she renounce the right to their even lawful use, but she aspires to that hope which God, who can never deceive, encourages by his promise, and which far surpasses the natural hope of posterity. In return for her generous sacrifice, her portion in heaven is the very happiness of the Angels.” 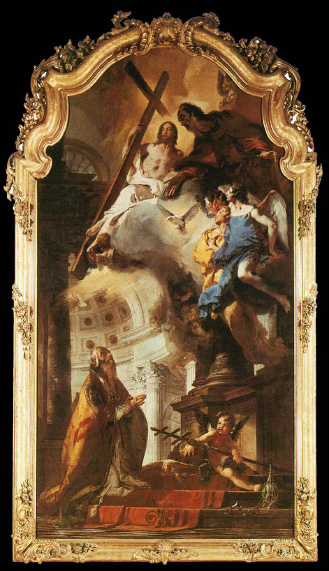 Thus spoke the disciple chosen by St. Peter to set his hand to the task of renovating Rome. It needed no less than this strong doctrine, in order to combat the depraved manners of the Empire. Had Christianity been satisfied with inviting men to honor, as the Philosophers had done, its efforts would have been to no purpose. Stoicism, by exciting great pride, could bring some men even to despise death; but it was utterly powerless against sensuality, which we must own to have been the strongest auxiliary to the tyranny of the Caesars. The ideal of chastity, thrown into the midst of that dissolute society, could alone arrest the ignominious torrent that threatened to submerge all human dignity. Happily for the world, Christian morality succeeded in gaining ground; and, its maxims being followed up by striking examples, it at length forced itself upon the public notice. Roman corruption was amazed to hear of virginity being held in honor and practiced by a great many followers of the new religion; and that at a time when the greatest privileges and the most terrible chastisements could scarcely keep to their duty the six vestals, upon whose fidelity depended the honor and the safety of the city. Vespasian and Titus were aware of the infringements upon their primary duty committed by these guardians of the Palladium; but they considered that the low level at which morals then stood, forbade them to inflict the ancient penalties upon these traitresses.

The time, however, was at hand, when the emperors, the senate, and all Rome, were to learn from the first Apology of St. Justin the marvels of purity concealed within that Babylon of iniquity. “Among us, in this city,” said the Apologist, “there are many men and women who have reached the age of sixty or seventy years; brought up from infancy under the law of Christ, they have persevered to this day in the state of virginity; and there is not a country where I could not point out many such.” Athenagorus, in a memorial presented a few years later to Marcus Aurelius, was able to say in like manner: “You will find among us a multitude of persons, both men and women, who have passed their life up to old age in the state of virginity, having no ambition but to unite themselves more intimately to God.”

Clement was predestined to the glory of martyrdom; he was banished to the Chersonesus on the Black Sea. The Acts, which relate the details of his sufferings, are of very great antiquity; we shall not here enter into discussions concerning them. They tell us how Clement found in the peninsula a considerable number of Christians already transported there and employed in working the rich and abundant marble quarries. The joy of these Christians on seeing Clement is easily conceived; his zeal in propagating the faith in this far-off country, and the success of his apostolate, are no matter for surprise. The miracle of a fountain springing from the rock at Clement’s word, to quench the thirst of the Confessors, is a fact analogous to hundreds of others related in the most authentic Acts of the Saints. Lastly, the apparition of the mysterious Lamb upon the mountain, marking with his foot the spot whence the water was to flow, carries back the mind to the earliest Christian mosaics, on which may still be seen the symbol of the lamb standing on a green hillock. 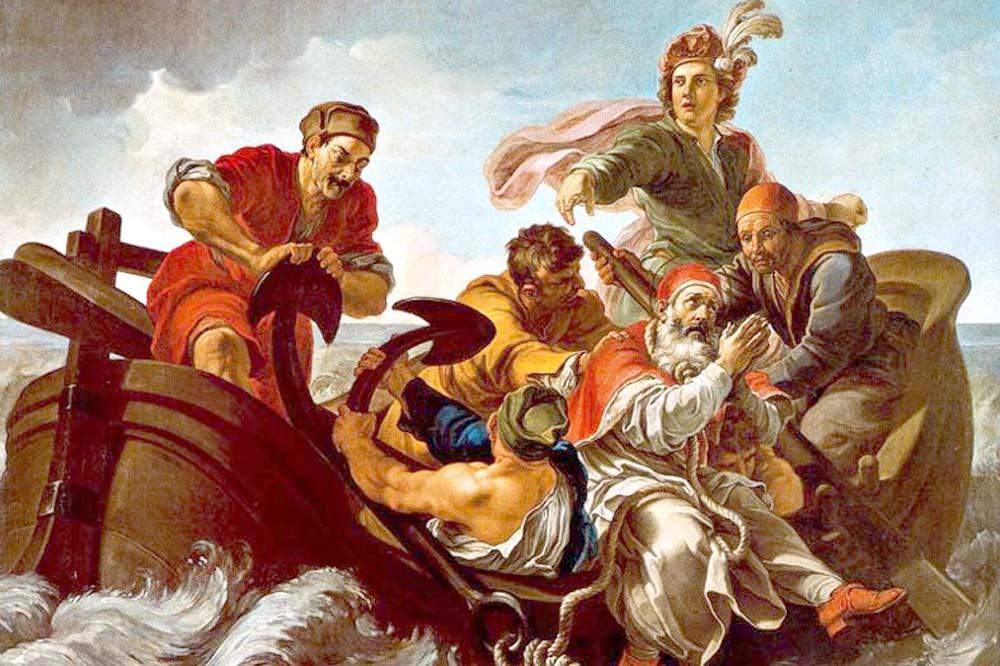 In the ninth century St. Cyril, apostle of the Slavs, discovered near Cherson the precious remains of the martyr-pontiff. Clement was brought back to Rome; and the great church which had hitherto, according to St. Jerome, preserved the memory of his name, henceforth possessed a still richer treasure. The very memory, however, was of great value for science no less than for piety: on the testimony of ancient traditions, this church was built on the site of St. Clement’s old home in the region of Monte Cœlio, which we know from other sources to have been the quarter preferred by the Roman aristocracy of the period. Modern archaeological investigations have discovered beneath the apse of the primitive basilica, and forming a sort of underground Confession or crypt, the rooms of a private dwelling, the style and ornaments of which are of the Flavian period.

It is time to read the liturgical account of the great Pope of the first century. 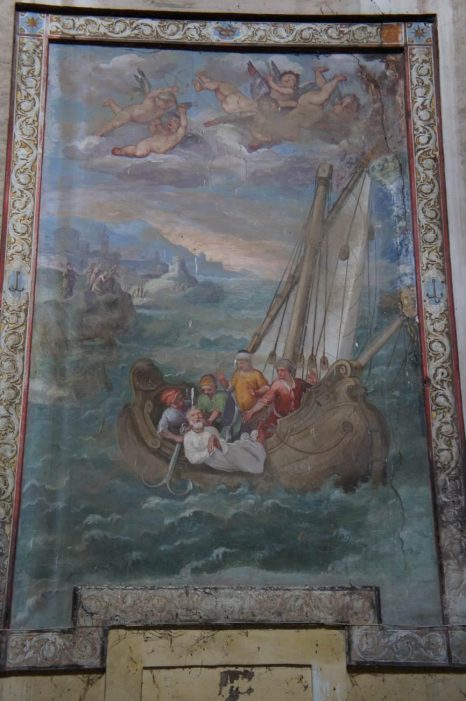 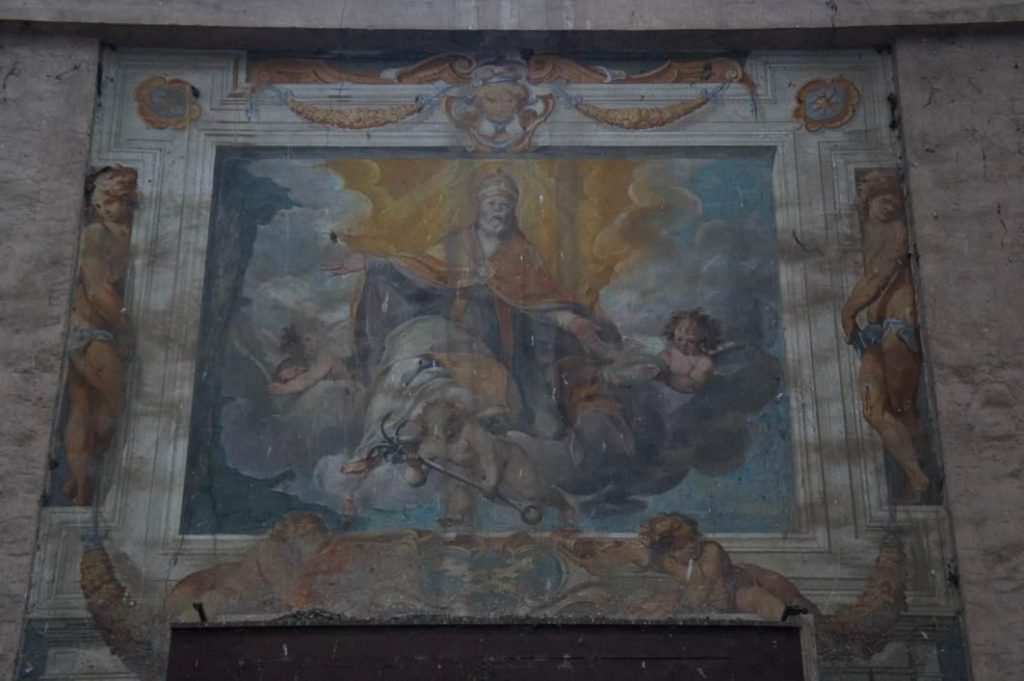 We take the following beautiful formulæ from the Leonian Sacramentary. 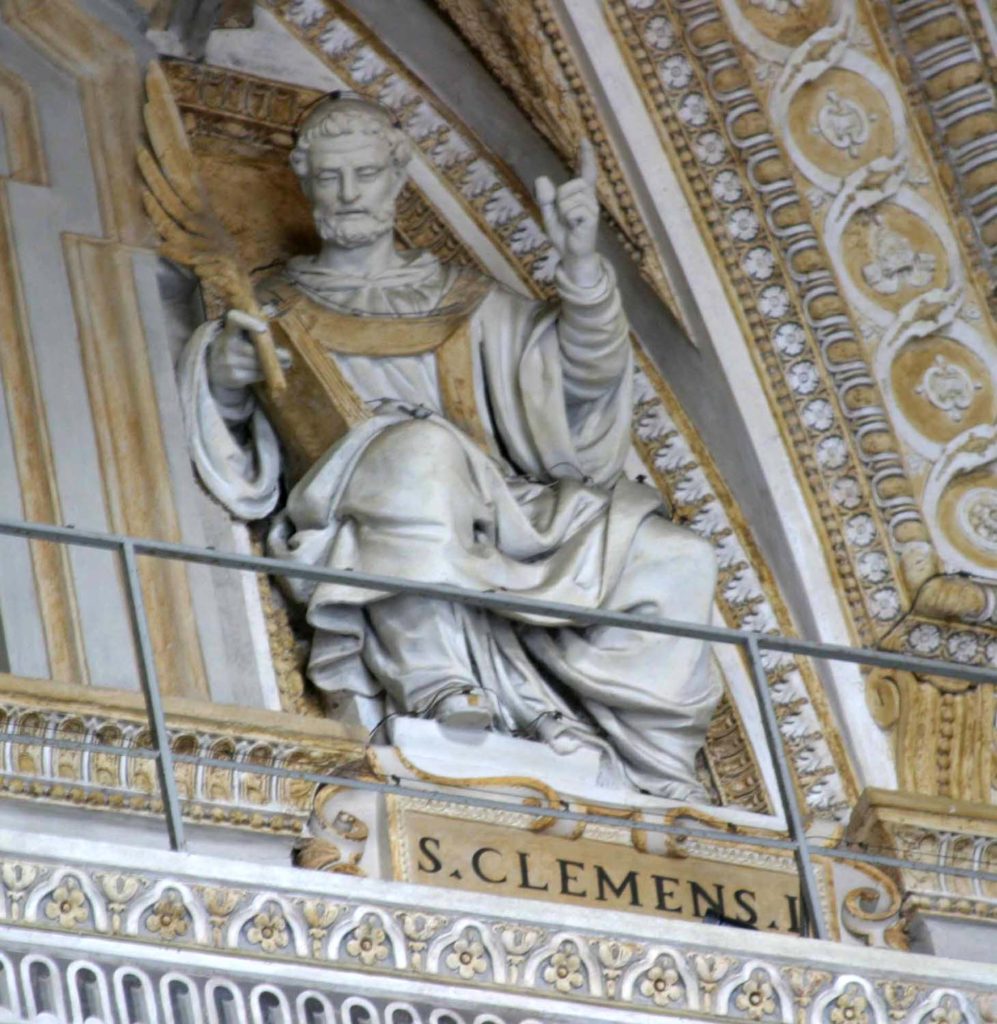 The Lord saith: My Words which I have put in thy mouth, shall not depart out of thy mouth: and thy gifts shall be accepted upon my altar. (Isaias 59:21) Thus does the Church open the chants of the great Sacrifice in thy honor, O holy Pontiff! It was indeed a joy and a supreme consolation to her to experience that after the departure of the Apostles, the word did not fail; for of all the gifts left her by her divine Spouse at his Ascension into heaven, this was the most indispensable. In thy writings, the word continued to traverse the world, authoritative and respected, directing, pacifying, sanctifying the people, as fully and as surely as in the days of the Apostles or of our Lord himself. Clear and manifest, thanks to thee, was the proof that Jesus, according to his promise, remains with his disciples till the end of the world. Be thou blessed for having thus, in the earliest times, consoled our Mother the Church.

Thou didst understand, O Clement, that the great apostolic work, the diffusion of the Gospel among all nations, was not to be interrupted by the departure of the first laborers. Thou didst cause death and darkness to retreat farther and farther. All nations owe thee a deep debt of gratitude; but especially the French: for thou didst send thy messengers to Paris and its sister cities, crying in thy name: Rise thou that sleepest, and arise from the dead; and Christ shall enlighten thee.

But the labors of an apostolate attacked in every land by the prince of this world, and the cares of universal government, did not exhaust the zeal that fired thy apostolic soul. Be thou blessed for having reserved thy special teaching and solicitude for the best-loved portion of our Lord’s flock, for them that follow the Lamb on the mountain, where thou didst see him, and whithersoever he goeth. Through thy prayers, may the imitators of Flavia Domitilla increase in number and still more in merit. May every Christian learn from the lesson of thy life that the nobility of this world is nothing compared with that which is won by the love of Christ. May the world, and its capital, once given to God by the Apostles and the Roman patricians, become once more his undisputed kingdom. 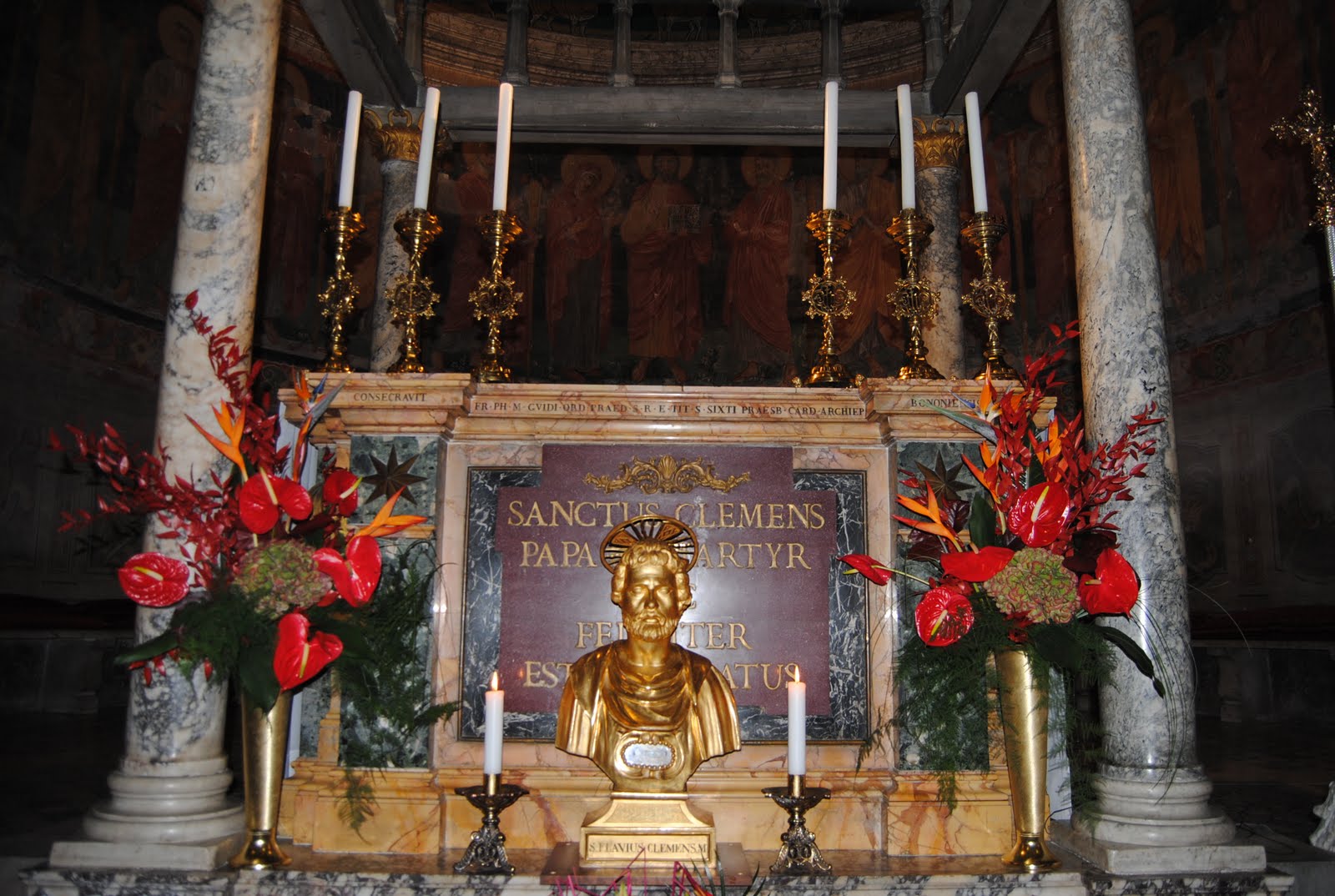 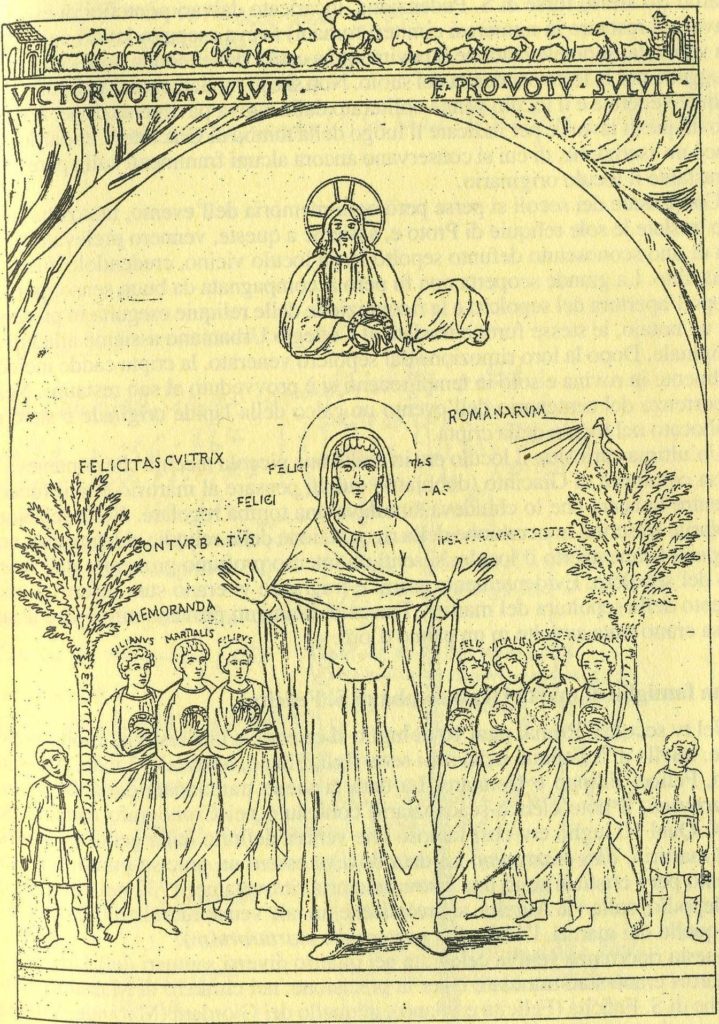 On the 10th of July we honored St. Felicitas, mother of the Martyrs, giving a second and heavenly birth to her seven sons. But her own recompense was delayed for four long months. The Church has inscribed her name on the sacred diptychs; let us, then, again offer her our prayers and praises on this day, whereon the sword at length fulfilled her desires, and in justification of her name, restored her to her sons in eternal felicity. 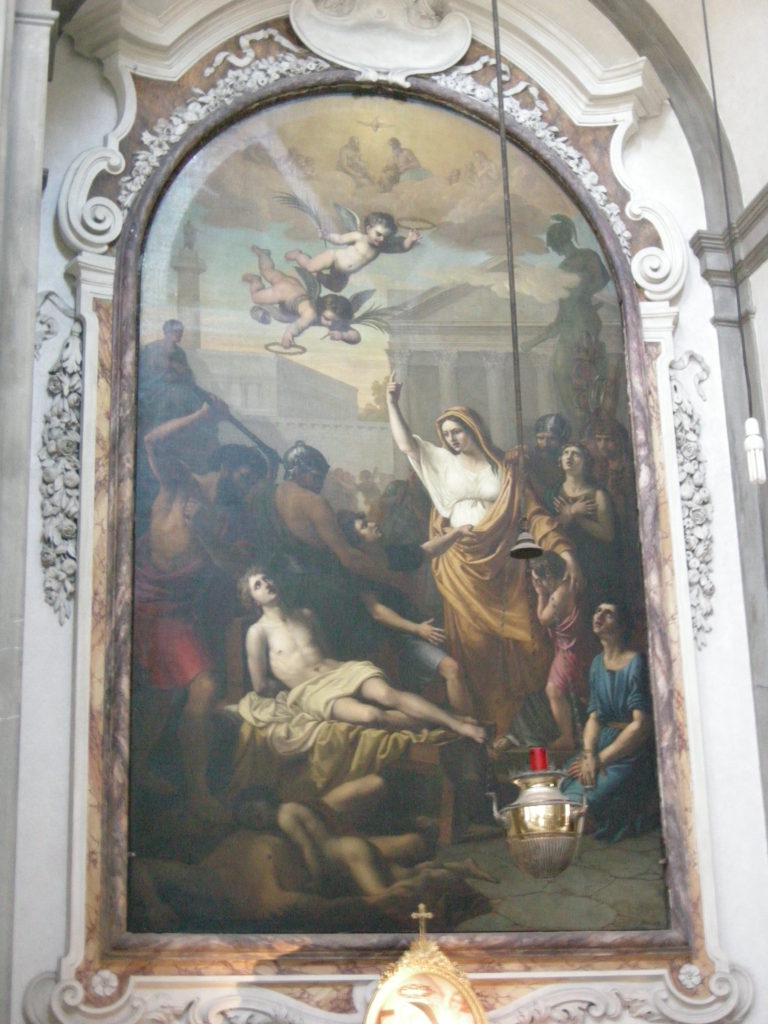