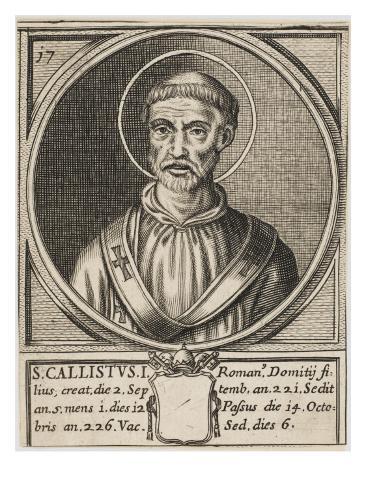 He was a sign of contradiction in Israel. In his own time, Christians were ranged either around him or against him. The trouble excited by his mere name sixteen hundred years ago was renewed in the middle of the nineteenth century by the discovery of a famous book, which gave an occasion to the sectaries of our own days to stand with those of old against Callixtus and the Church. The book, entitled Philosophumena or refutation of heresies, was composed in the third century; it represented Callixtus, whose life and character were painted in the darkest colors, as one of the worst corrupters of doctrine.

In that third century, however, the author of the Philosophumens, attacking the Pontiff he wished to supplant, and setting up in Rome, as he himself acknowledges, Chair against Chair, did but publish to the Church his own shame, by ranging himself among those very dissenters of whom his book professed to be the refutation and the history. The name of this first Antipope has not come down to us. But behold his punishment! The work of his envious pen, despised by his contemporaries, was to reappear at the right moment to awaken the slumbering attention of a far-off posterity. The impartial criticism of these latter ages, setting aside the insinuations, took up the facts brought forward by the accuser; and with the aid of science, disentangling the truth from among his falsehoods, rendered the most unexpected testimony to his hated rival. Thus once more iniquity lied to itself; and this word of today’s Gospel was verified: Nothing is covered that shall not be revealed; nor hid that shall not be known.

Let us listen to the greatest of Christian archæologists, whose mind, so sure and so reserved, was overcome with enthusiasm on finding so much light springing from such a source. “All this,” said the Commandant de Rossi on studying the odious document, “gives me clearly to understand why the accuser said ironically of Callixtus that he was reputed most admirable; why, though all knowledge of his acts was lost, his name has come down to us with such great veneration; and lastly, why, in the third and fourth centuries when the memory of his government was still fresh, he was honored more than any of his predecessors, or of his successors, since the ages of persecution. Callixtus ruled the Church when she was at the term of the first stage in her career, and was marching forward to new and greater triumphs. The Christian faith hitherto embraced only by individuals, had then become the faith of families; and fathers made profession of it in their own and their children’s name. These families already formed almost the majority in every town; the religion of Christ was on the eve of becoming the public religion of the nation and the empire. How many new problems concerning Christian social rights, ecclesiastical law and moral discipline must have daily arisen in the Church, considering the greatness of her situation at the time, and the still greater future that was opening before her! Callixtus solved all these doubts; he drew up regulations concerning the deposition of clerics; took the necessary measures against the deterring of catechumens from Baptism, and of sinners from repentance; and defined the notion of the Church, which St. Augustine was afterwards to develop. In opposition to the civil laws, he asserted the Christian’s right over his own conscience, and the Church’s authority with regard to the marriage of the faithful. He knew no distinction of slave and freeman, great and lowly, noble and plebeian, in that spiritual brotherhood that was undermining Roman society, and softening its inhuman manners. For this reason, his name is so great at the present day; for this reason, the voice of the envious, or of those who measured the times by the narrowness of their own proud mind, was lost in the cries of admiration, and was utterly despised.”

We have not space to develop, as it deserved, this masterly exposition. We have already seen how, when the virgin martyr Cæcelia yielded to the Popes the place of her first sepulcher, Callixtus, then deacon of Zephyrinus, arranged the catacomb of the Cæcilii for its new destiny. Venerable crypt, in which the State for the first time recognized the Church’s right to earthly possessions; sanctuary, no less than necropolis, wherein, before the triumph of the Cross, Christian Rome laid up her treasures for the resurrection day. Our great martyr-Pontiff was deemed the most worthy to give his name to this the principal cemetery, although Providence had disposed that he should never rest in it. Under the benevolent reign of Alexander Severus, he met his death in the Trastevere, in a sedition raised up against him by the pagans. The cause of the tumult appears to have been his having obtained possession of the famous Taberna meritoria, from the floor of which, in the days of Augustus, a fountain of oil had sprung up and had flowed for a whole day. The Pontiff built a church on the spot, and dedicated it to the Mother of God; it is the basilica of St. Mary in Trastavere. Its ownership was contended for; and the case was referred to the emperor, who decided in favor of the Christians. We may attribute to the vengeance of his adversaries the Saint’s violent death, which took place close to the edifice his firmness had secured to the Church. The mob threw him into a well, which is still to be seen in the church of St. Callixtus, a few paces from St. Mary’s basilica. For fear of the sedition, the martyr’s body was not carried to the Appian Way; but was laid in a cemetery already opened on the Aurelian Way, where his tomb originated a new historic center of subterranean Rome.

The following brief notice was drawn up at a period when the history of Callixtus was less known than at present. 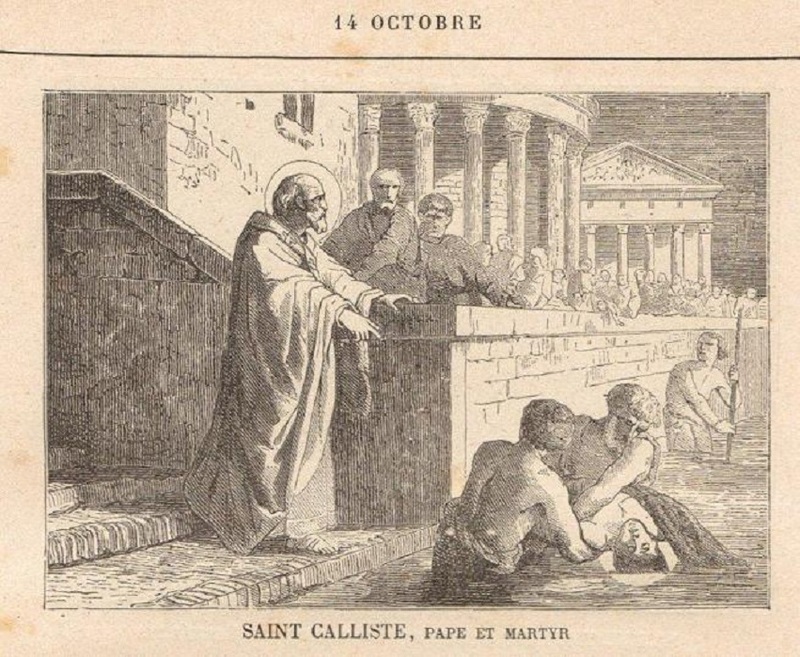 The Holy Ghost, the protector of the Church, prepared thee by suffering and humiliation, to become his chosen auxiliary. Thou wast born a slave; Jewish perfidy soon spread snares beneath thy feet; and while still young thou wast condemned to the mines of Sardinia, for the Name of our Lord. Thou wast a bond-slave, it is true, but not now for thy former master. And when delivered from the mines at the time appointed by him who regulates circumstances according to his good pleasure, thou wast ennobled by the title of Confessor, which recommended thee to the maternal attention of the Church.

Such were thy merits and virtues, that Zephyrinus, entering upon the longest pontificate of the persecution period, chose thee for the counsellor, support, and coadjutor of his old age; and after the experience of those eighteen years, the Church elected thee for her supreme Pastor. At the hour of thy death, how prosperous didst thou leave this Bride of Our Lord! All the nobility of the ancient days, all the moral worth and intellectual eminence of the human race, seemed to be centered in her. Where was then the contempt of old, where the calumnies of a while ago? The world began to recognize in the Church the queen of the future. If the pagan state was yet to inflict cruel persecutions upon her, it would be from the conviction that it must struggle desperately for its very existence. It even hesitated, and seemed, for the moment, more inclined to make a compact with the Christians.

Thou didst open to the Church new paths, full of peril, but also of grandeur. From the absolute and brutal Non licet esse vos of the lawyer-executioners, thou wast the first to bring the empire to recognize officially, to a certain extent, the rights of the Christian community. Through thee, Cæcilia assured to them the power of assembling together, and making collections to honor their dead; thou didst consecrate to Mary, fons olei, the first sanctuary legally acquired by the Christians in Rome; and thou wast rewarded for the act by martyrdom. Now, far from compromising the least of God’s rights in coming to terms with Cæsar, thou didst, at that very time, oppose the latter, asserting, as no other had yet done, the absolute independence of the Church with regard to marriage, which Christ had withdrawn from the jurisdiction of the civil power. Already, “would not one be inclined to say that we have a nation within the nation? Yes; and it will continue to be so, until the whole nation itself have passed into the ranks of this new people.”

Within the bosom of the Church, thou hadst other cares. Doctrinal contests were at their height, and attacked the first of our mysteries: Sabellius condemned for his audacity in declaring that the real distinction of Persons in the most Holy Trinity is incompatible with the unity of God, left the field open to another sect, who so separated the Three Divine Persons as to make them three Gods. Again, there was Montanus, whose disciples, enemies of the Sebellian theories even before Sabellius appeared, courted the favor of the Holy See for their system of false mysticism and extravagant reformation. But as an experienced pilot avoids the rocks and shoals, so between the subtilities of dogmatizers, the pretensions of rigorists, the the utopias of politicians, thou, under the infallible guidance of the Holy Spirit, didst with a sure hand steer the barque of Peter towards its glorious destination. The more Satan hates thee and pursues thee even to the present day, the more mayest thou be glorified forever. Give thy blessing to us, who are thy sons and thy disciples. 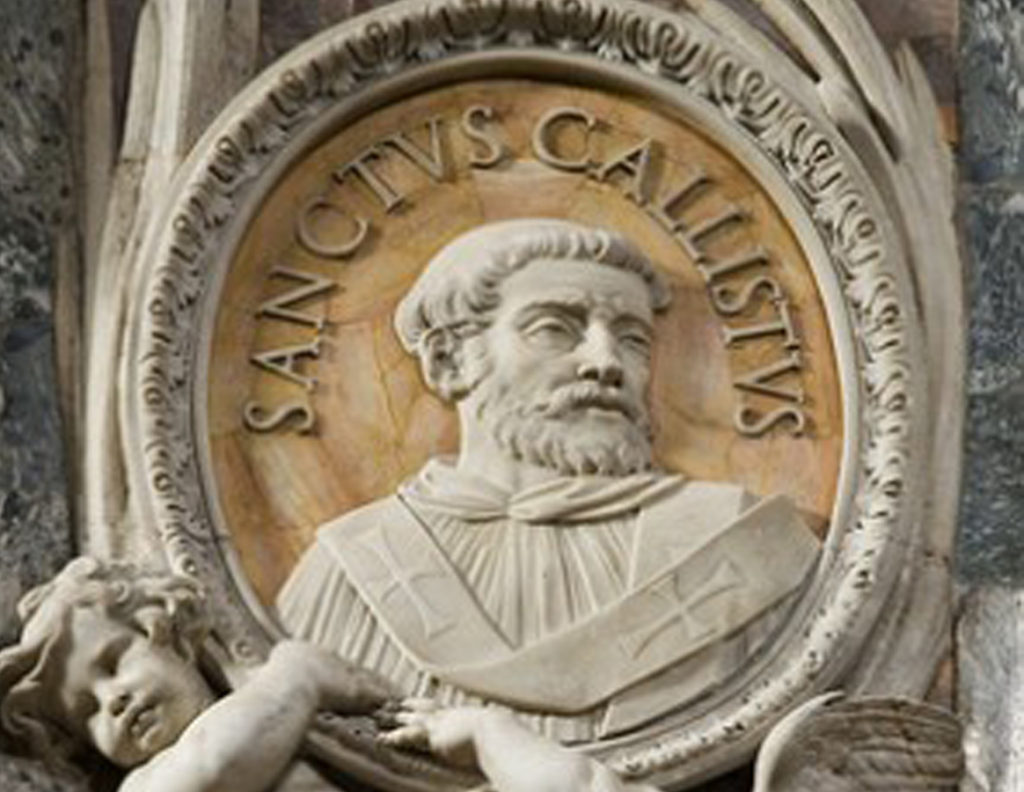