Ushered in by Bridget the northern prophetess, Dionysius appears as the brightest star in that constellation of mystics, which illumines the close of the cycle with the first glimmers of eternal union. Soon we shall salute Teresa of Jesus, and her guide Peter of Alcantara; while from the shades of his Obscure night, John of the cross will rise in glory next month near to the great St. Gertrude.

The Man-God began to do and to teach, gave us first example then doctrine; so too the Church, in her liturgical year, first sets before us the examples of the saints, and afterwards teaches us the rules of sanctity as formulated by these holy ones themselves. Strong in the results she has obtained, she now seems to rest in the security gained by experience, and, as in the proper of the time, of which that of the saints is the faithful echo, she yields to her desire of seeing her children able to comprehend, with all the saints, what is the breadth and length and height and depth. To know also the charity of Christ, which surpasseth all knowledge, that they may be filled unto all the fullness of God. Is not this the good work which the apostle prays may be perfected in us by that last day, for which these weeks after Pentecost are preparing us, viz: the perfect justice, the fruit of love in its full development? But this development of love cannot be without the progress of the soul in all wisdom and spiritual understanding; and that approving of better things, of which St. Paul speaks, can be acquired only by the imitation of the saints or the study of their works. 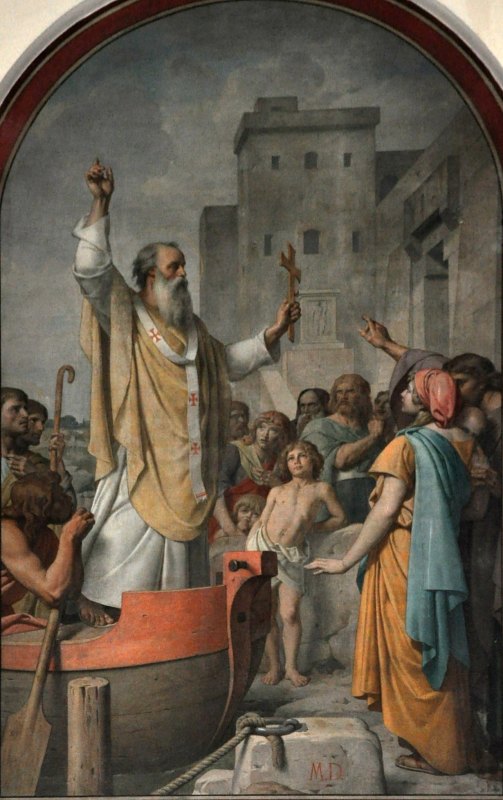 Today the incomparable teacher Dionysius presides over the assembly of the faithful. With east and west let us keep silence; for it behooveth the master to speak and teach, and it beseemeth the disciple to hold his peace and listen.

“Every best gift, and every perfect gift, is from above, coming down from the Father of lights. Every emanation of splendor overflowing from the divine goodness upon man, reacts in him as a principle of spiritual simplification and of heavenly union; and by its own power leads him back towards the sovereign unity and godlike simplicity of the Father. For all things come from God, and return to God.

“By the very fact that they exist, inanimate objects partake of God, who, by the sublimity of His Essence, is the being of all that is. Living things partake of His vital energy, which is superior to all life. Rational and intellectual creatures partake of His wisdom, which surpasses all reason and intelligence. The various beings approach nearer to the Divinity, in proportion as they partake of It in more ways.

“It is a general law, that divine graces are communicated to the lower orders through the ministry of the higher. The indivisible Trinity, who possesses Divinity by nature, has established the hierarchy of the deification of all beings, whether rational or purely spiritual. For salvation is possible only to deified spirits. As deification is nothing else but the attainment of union with God, and resemblance to Him, the aim of the hierarchy is to assimilate and unite to God; first of all by the absolute retrenchment of all that is contrary to His love; then by the knowledge of sacred truths; by the participation in the simplicity of Him who is One, and by the nuptial banquet of the vision.

“The first hierarchy of blessed spirits receives the first influx of the virtues of Jesus the supreme initiator, and imitates Him in the highest manner. This first hierarchy is obeyed by the second, the second by the third, and the third by the hierarchy of men. And thus, by a divine harmony they rise, one by means of another, towards Him who is the beginning and the end of all beautiful order. 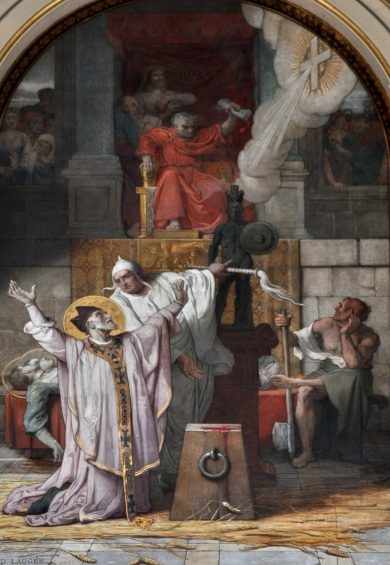 “As each hierarchy includes Powers of three different ranks, the same wonderful harmony exists between these several ranks. Moreover, in every intelligence, human or angelic, are to be found faculties corresponding to the three orders of each hierarchy. It is by passing through these successive degrees, that spirits partake, according to their capacity, of purity, light, and unlimited perfection. For nothing is perfect in itself; nothing is incapable of further progress, save Him who is the primitive and infinite perfection.

“The blessed inhabitants of heaven, who have nothing sensible or corporeal, God attracts and raises to divine things, not by exterior means; He causes the pure rays and intelligible splendors of His adorable will to shine within them. What is thus imparted to them directly and in unity, is transmitted to us as it were in fragments, under the multiplicity of varied symbols: in the holy Scripture; in the figures wherein our hierarchy, adapting itself to human nature, shrouds for us the mystery of divine regeneration and all the other holy mysteries; and again, in the harmony of the universe, which shows forth the images and footprints of the divine ideas.

“Though all things speak of God to man, not one of them speaks aright. God is accessible to the understanding, to reason, to science; He is discerned by the sensibility, by thought, by the imagination; in a word, He can be named; nevertheless He is incomprehensible, ineffable, nameless. Everything reveals Him to all men, and yet nothing manifests Him to anyone. Everything may be predicated of Him, as being the universal cause; but as He is beyond all expression, everything may be more truly denied of Him.

“Hence many, in their progress towards God, are not content with passing beyond the starting point of exterior senses necessary to our nature, but rise beyond the manifold operations of reasoning and argumentation. As the senses are a hindrance, when the soul applies herself to intelligible things by the pure understanding; so the intellectual faculty itself becomes useless when the divinized soul, sublimely ignorant, forgetful of all things, plunges herself into the abyss of unfathomable wisdom. The simple adhesion of the angelic natures to Him who surpasses all knowledge, has become the property of these souls; emulating the angels, they have attained the aim of all hierarchy, by becoming as entirely as possible united with God.

“Guide of Christians in sacred wisdom, O Trinity, sovereignly good, lead us to that height, where all light is outshone by a darkness which coruscates in brilliant lightnings, and, though it can be neither seen nor grasped, inundates with the beauty of its fires the blessedly blinded spirits.” 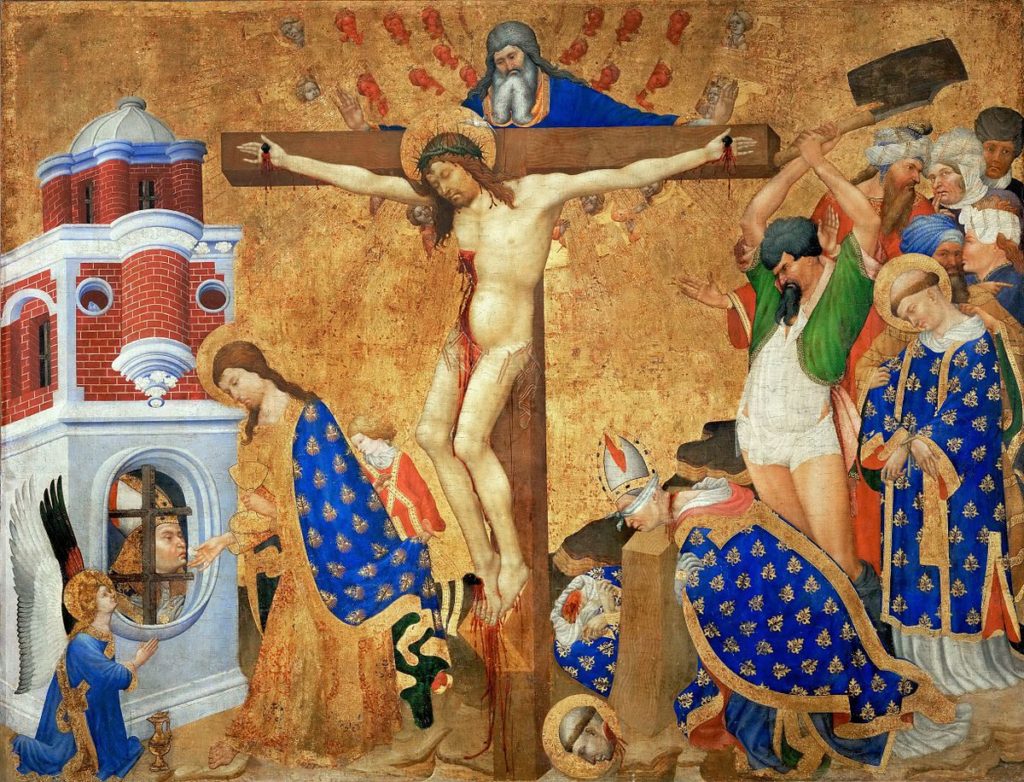 Could we presume to add anything? As we have already remarked, the Church herself, at this season which prepares the world for the last coming of the Spouse, moderates her voice. Especially ought we to imitate her today, when the divinely inspired Areopagite, oppressed with the weight of his own powerlessness, cries out: “Our language is the more redundant in proportion as it is less pertinent to God. As man rises nearer to heaven, the glance he casts upon the spiritual world becomes simplified and his speech abridged; nigh to the summit, not only do words grow fewer, but all language, nay thought itself, at length fails. Formerly our discourse expanded in proportion to the height whence it descended; as it ascends, it must equally diminish, until, arrived at the full term, it will altogether cease and be lost in the ineffable.”

Meanwhile, Rome will tell us how the revealer of the heavenly hierarchies, coming from Athens into the west, watered with his generous blood the seed he sowed in the future capital of France. Enriched with his sacred body, the humble borough now known as Saint-Denis long surpassed in renown its neighbor Lutetia (Paris). France repaid her apostle’s devotedness by the glory wherewith she surrounded him; it would seem as if, by a chivalrous inspiration, she had undertaken to compensate him for having abandoned his native country for her sake. Immense was the concourse of people to his holy tomb; and still greater was the piety of the kings. The martyr’s banner, the oriflamme, was their standard, Mountjoy St. Denys their battle cry, in every clime whither victory led them. As in life they never quitted the kingdom without entrusting it to the protector of France in his abbey, so at death they bequeathed to him their mortal remains. In spite of sacrilegious profanations, what a sublime spectacle will the holy necropolis present to the world on the last day, when, before the eyes of Adrian and his prefects, he whom they executed at Montmartre and condemned to infamy, will rise from his tomb escorted by three dynasties of monarchs proud to form, at the resurrection, the court of him whom they deemed it an honor to surround in death. Thy friends, O God, are made exceedingly honorable! 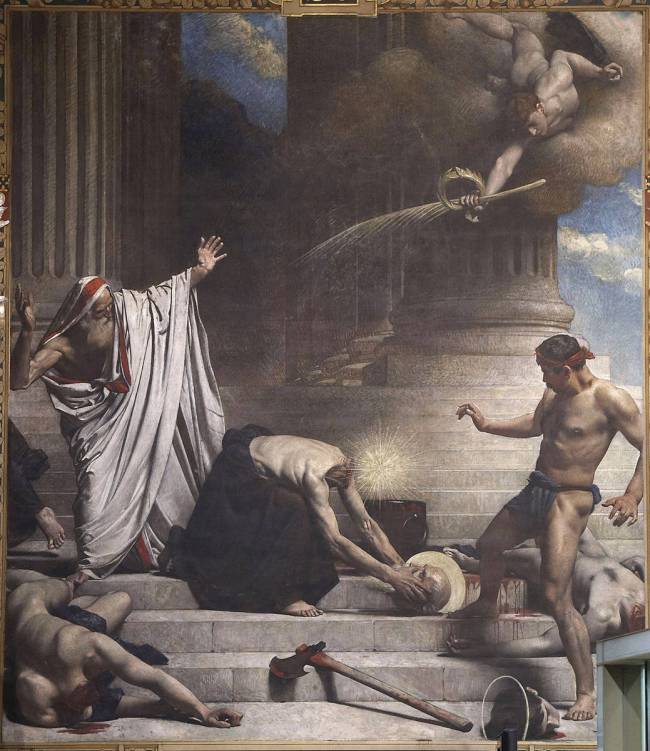 The account given by Rome of St. Dionysius and his companions, is the same as that in the Menæa of the Greek Church, though the latter keeps their Feast on October 3. 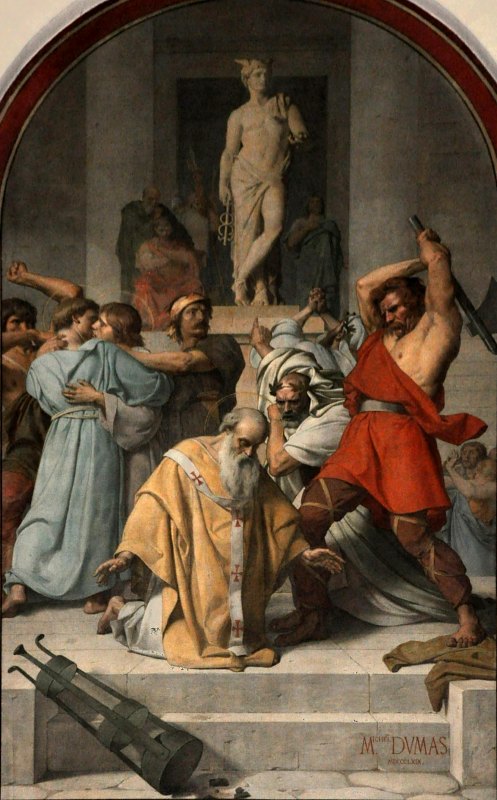 Honor to thee on this day of thy triumph! Honor to the apostle of the Gentiles, who comes to meet thee, as his noble conquest, on the threshold of eternity. From early youth how thy soul yearned for that unknown God, whom the apostle at length revealed to the longing aspirations of thy grand, upright nature! To the darkness of polytheism, to the doubts of philosophy, to the vague glimmers of confused traditions, suddenly succeeded the light of truth; and its triumph was complete. Thou, O Christian Plato, didst enlarge the horizon of philosophy, and didst so rectify its formulas that in them truth could be fittingly clothed. Thou, in thy turn, didst become an apostle; the distinction of Greek and barbarian, that law of the ancient world, was lost in the common origin assigned by St. Paul to all peoples; to the eyes of thy faith, slaves and freemen were equal in that nobility which makes the human race the race of God; while the charity, which overflowed in thy heart, filled it with the immense pity of God Himself for the long ages of ignorance in which mankind had been plunged. 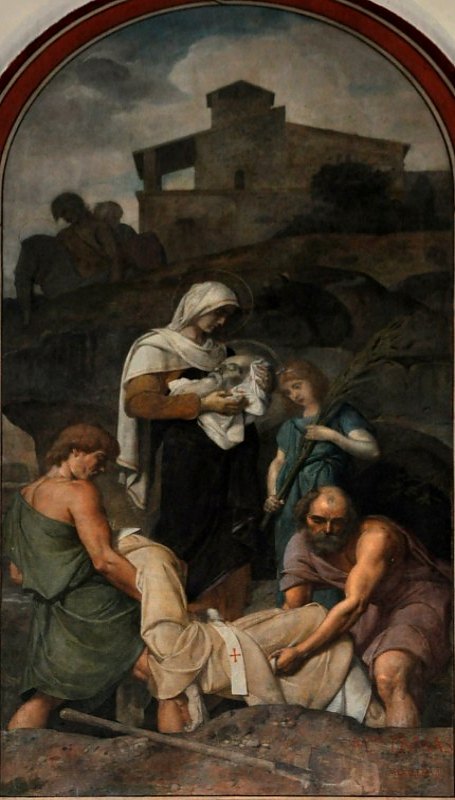 Thus in thy zeal, obeying the inspiration of the Holy Ghost, thou, like a cloud laden with the blessings of the Lord, didst bring fertility to the far west. The people of Gaul learned from thee to seek God, to find Him, and to live in Him; and this new church had no reason to envy the earlier ones built on the foundations of prophets and apostles. O chosen stone, good for the foundations, so intimately united to the Corner-Stone that every construction thou upholdest becomes a holy temple of the Lord: the church of France built upon thee, is also the house of God.

O Dionysius, quicken again the divine seed thou didst sow. Restore to Paris and to France their traditions, now forgotten in the fever of gain and pleasure. Bring back Athens to the communion of Christ’s vicar, the indispensable condition of union with our Lord. For every church under heaven obtain such pastors as thou didst describe in the following lines which reveal thyself: “By the holy love which draws us to Him, Jesus calms the tempest of distracting cares; and recalling our souls to the unity of the divine life, He confirms us in the permanent fruitfulness of this noble ministry. Soon, by the exercise of the sacred functions, we draw nigh to the angels, striving to set ourselves, like them, in the fixed state of unchangeable holiness. Thence, gazing upon the divine splendors of the blessed Jesus, and enriched with the profound knowledge of mystical contemplation, we become fitted to be ourselves consecrated in order that we may consecrate, to receive light in order to communicate it, to become perfect in order to lead others to perfection.” 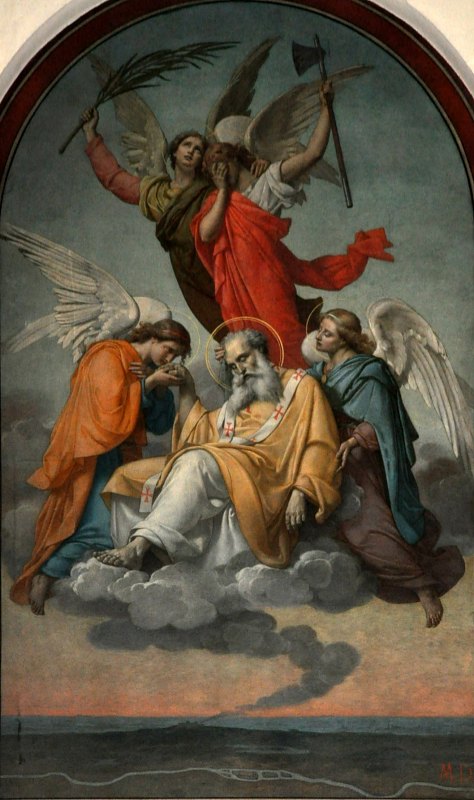