September 14 – The Exaltation of the Holy Cross

“Through thee the precious Cross is honored and worshiped throughout the world.” Thus did St. Cyril of Alexandria apostrophize our Lady on the morrow of that great day, which saw her divine maternity vindicated at Ephesus. Eternal Wisdom has willed that the Octave of Mary’s birth should be honored by the celebration of this Feast of the triumph of the holy Cross. The Cross indeed is the standard of God’s armies, whereof Mary is the Queen; it is by the Cross that she crushes the serpent’s head, and wins so many victories over error, and over the enemies of the Christian name.

By this sign thou shalt conquer. Satan had been suffered to try his strength against the Church by persecution and tortures; but his time was drawing to an end. By the edict of Sardica, which emancipated the Christians, Galerius, when about to die, acknowledged the powerlessness of hell. Now was the time for Christ to take the offensive, and for his Cross to prevail. Towards the close of the year 311, a Roman army lay at the foot of the Alps, preparing to pass from Gaul into Italy. Constantine, its commander, thought only of revenging himself for an injury received from Maxentius, his political rival; but his soldiers, as unsuspecting as their chief, already belonged henceforward to the Lord of hosts. The Son of the Most High, having become, as Son of Mary, king of this world, was about to reveal himself to his first lieutenant, and at the time to discover to his first army the standard that was to go before it. Above the legions, in a cloudless sky, the Cross, proscribed for three long centuries, suddenly shone forth; all eyes beheld it, making the Western sun, as it were, its footstool, and surrounded with these words in characters of fire: In hoc vince: by this be thou conqueror! A few months later, the 27th of October 312, all the idols of Rome stood aghast to behold, approaching along the Flaminian Way, beyond the Bridge Milvius, the Labarum with its sacred monogram, now become the standard of the imperial armies. On the morrow was fought the decisive battle, which opened the gates of the Eternal City to Christ, the only God, the everlasting King.

“Hail, O Cross, formidable to all enemies, bulwark of the Church, strength of princes; hail in thy triumph! The sacred Wood still lay hidden in the earth, yet it appeared in the heavens announcing victory; and an emperor, become Christian, raised it up from the bowels of the earth.” Thus sang the Greek Church yesterday, in preparation for the joys of today; for the East, which has not our peculiar Feast of the 3rd of May, celebrates on this one solemnity both the overthrow of idolatry by the sign of salvation revealed to Constantine and his army, and the discovery of the holy Cross a few years later in the cistern of Golgotha. 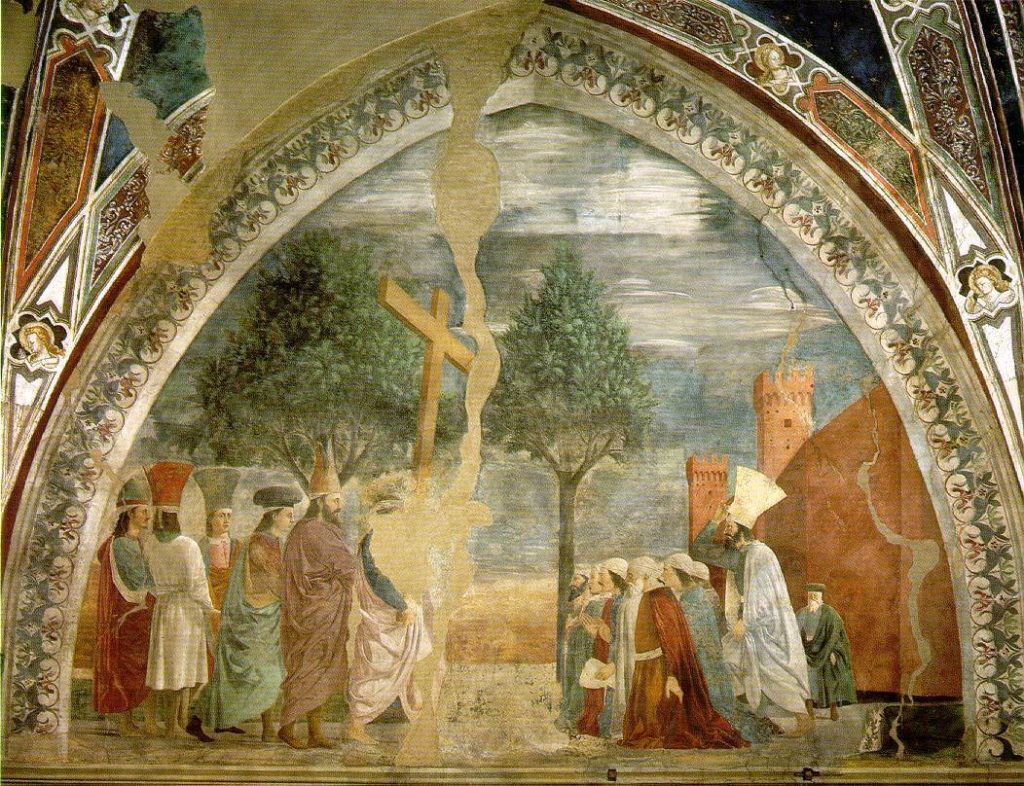 But another celebration, the memory of which is fixed by the Menology on the 13th of September, was added in the year 335 to the happy recollections of this day; namely, the dedication of the basilicas raised by Constantine on Mount Calvary and over the holy Sepulcher, after the precious discoveries made by his mother St. Helena. In the very same century that witnessed all these events, a pious pilgrim, thought to be St. Silvia, sister of Rufinus the minister of Theodosius and Arcadius, attested that the anniversary of this dedication was celebrated with the same solemnity as Easter and the Epiphany. There was an immense concourse of Bishops, clerics, monks, and seculars of both sexes, from every province; and the reason, she says, is that the Cross was found on this day; which motive had led to the choice of the same day for the primitive consecration, so that the two joys might be united in one.

It appears to have been about the same time that the West also began to unite in a certain manner these two great mysteries; leaving to the 14th of September the other memories of the Holy Cross, the Latin Church into Paschal Time a special feast of the finding of the Wood of Redemption. In compensation, the present solemnity acquired a new luster to its character of triumph by the contemporaneous events which, as we shall see, form the principal subject of the historical Legend in the Roman Liturgy.

A century earlier, St. Benedict had appointed this day for the commencement of the period of penance known as the monastic Lent, which continues till the opening of Lent proper, when the whole Christian army joins the ranks of the Cloister in the campaign of fasting and abstinence. “The Cross,” says St. Sophronius, “is brought before our minds; who will not crucify himself? The true worshipper of the sacred Wood is he who carries out his worship in his deeds.” 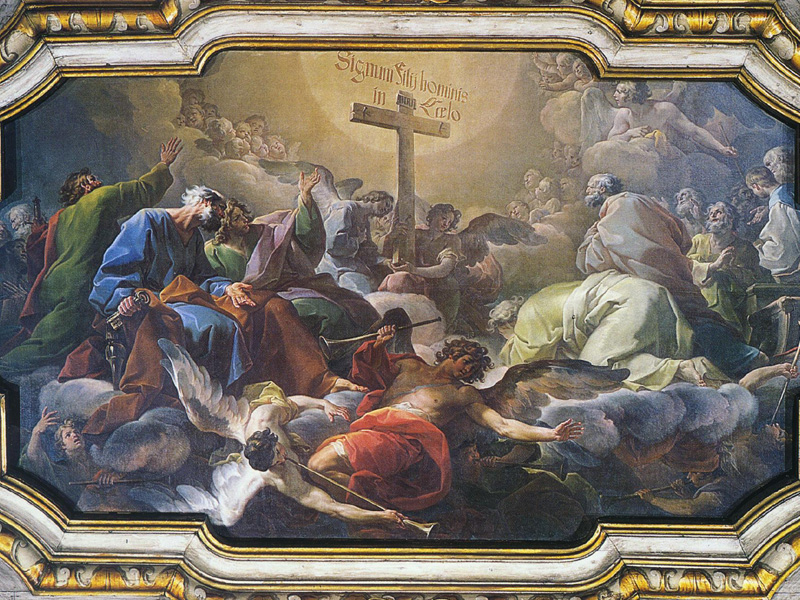 The following is the Legend we have already alluded to.

The victory thus chronicled in the sacred books of the Church was not, O Cross, thy last triumph; nor were the Persians thy latest enemies. At the very time of the defeat of these fire-worshippers, the prince of darkness was raising up a new standard, the Crescent. By the permission of God, whose ensign thou art, and who, having come on earth to struggle like us, flees not before any foe, Islam also was about to try its strength against thee: a two-fold power, the sword and the seduction of the passions. But here again, alike in the secret combats between the soul and Satan, as in the great battles recorded in history, the final success was due to the weakness the folly of Calvary.

Thou, O Cross, wert the rallying-standard of all Europe in those sacred expeditions which borrowed from thee their beautiful title of Crusades, and which exalted the Christian name in the East. While on the one hand thou wert thus warding off degradation and ruin, on the other thou wert preparing the conquest of new continents; so that it is by thee that our West remains at the head of nations. Through thee, the warriors in those glorious campaigns are inscribed on the first pages of the golden book of nobility. And now the new orders of chivalry, which claim to hold among their ranks the élite of the human race, look upon thee as the highest mark of merit and honor. It is the continuation of today’s mystery, the exaltation, even in our times of decadence, of the holy Cross, which in past ages was the standard of the legions, and glittered on the diadems of emperors and kings.

It is true, men have appeared in France who have made it their aim to overthrow the sacred sign, wheresoever our fathers had honored it. This invasion of the servants of Pilate into the country of the Crusaders was inexplicable, until it was discovered that they were in Jewish pay. These, as St. Leo says of the Jews in today’s Office, see in the instrument of salvation nothing but their own crime; and their guilty conscience makes them hire to pull down the holy Cross, the very men whom they formerly paid to set it up. The coalition of such enemies is but one more homage to thee! O adorable Cross, our glory and our love here on earth, save us on the day when thou shalt appear in the heavens, when the Son of Man, seated in his majesty, is to judge the world!